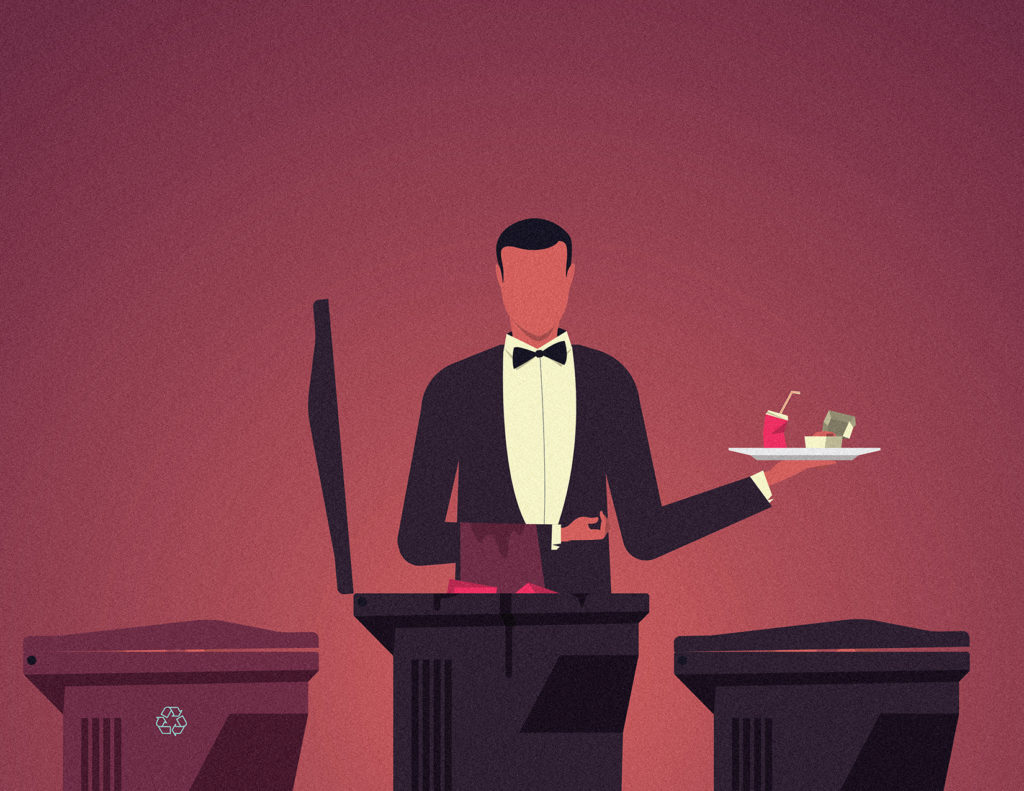 For years Orange County nonprofits and churches served food at two homeless encampments. But when the sites were cleared of the homeless, their benefactors didn’t know where to find them.

Back when Brian Champanich had steady work as an audio-visual production specialist at hotels and convention centers around Southern California, his favorite meal to cook at home was steak.

“Top sirloin, medium-rare,” he recalled one recent afternoon, sitting under the shade of a picnic shelter at Anaheim’s Twila Reid Park. “It’s a freakin’ good piece of meat. Sometimes, I’d throw in some French fries or a baked potato in the oven, but I was never really into veggies. I’d have friends try it, and they’d tell me, ‘Damn, you can really cook!’”

But the 42-year-old Thai-American hasn’t enjoyed a top sirloin ever since he became homeless three years ago. 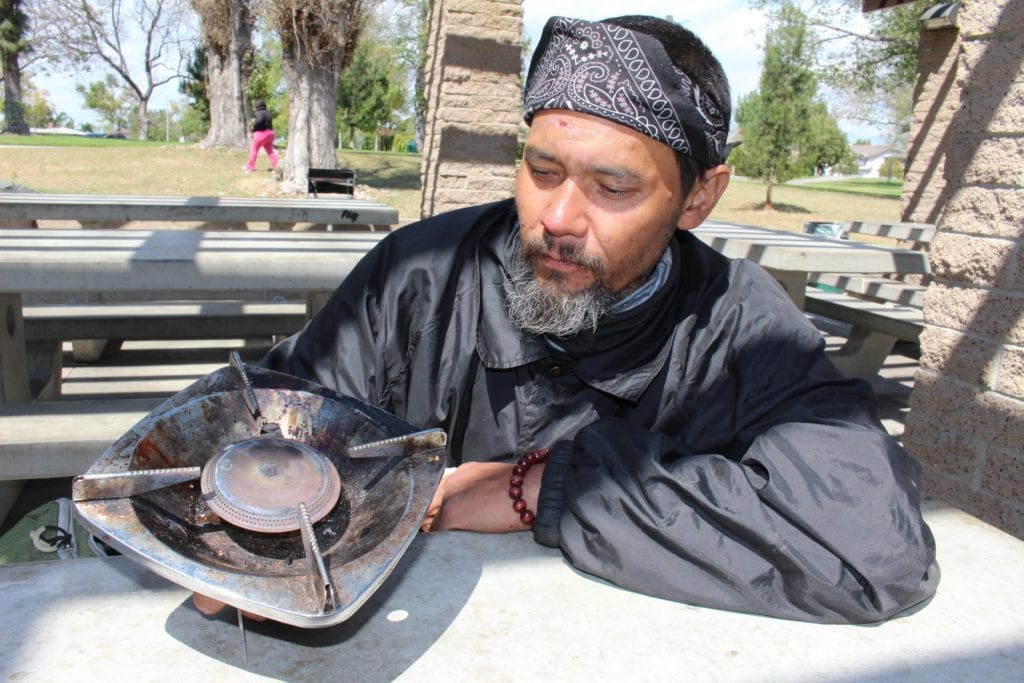 Champanich is wiry and wry, with a short haircut and a beard that’s graying at the chin. He’s one of whom housing advocates in Orange County call the Lost Boys — men who lived along the Santa Ana riverbed for the past couple of years but now don’t have a place to stay after the County of Orange cleared out its encampments in February. United States District Court Judge David O. Carter insisted that government officials offer temporary, 30-day motel vouchers to an estimated 600 long-term riverbed dwellers until the county figured out a permanent solution. But that push happened to coincide with a two-week stint at the Orange County Jail for Champanich, who says that made him ineligible for the program.

Many Lost Boys have relocated to Twila Reid because it’s within walking distance of long-rundown motels on Beach Boulevard in Anaheim and Stanton that are now alive with former riverbed residents. The 27-acre park is in a neighborhood of newer townhomes and hosts a playground, tennis courts, horseshoe pits and a Frisbee golf course. As Champanich speaks, retirees power-walk through its trails nearby; a group of women laugh as they roll up their yoga mats, while elsewhere some young people lay on the grass and vape. But homeless people linger at the edges and RVs are parked in a lot toward the back, away from the traffic of Orange Avenue and the gaze of patrol cars.

Andre Harris arrives on a purple bicycle. The former nursing student grabs a bag of Brandless Sour Cream & Onion Potato Crisps from Champanich, ignoring a berry-flavored Propel water in front of his friend. Harris begins to snack on the chips; they’re not half bad.

“You know freeganism?” Champanich says. “I’ve taken on some of those traits.”

The Lost Boys are men who lived along the Santa Ana riverbed for the past couple of years but now have no place to stay after they were scattered from their encampments in February.

For the next hour, he and Harris explain how the homeless eat: how they cook, where they find food, the virtue of sharing with others. What emerges is a story of luck, charity and resourcefulness—but also of how eradicating long-established communities can lead to worse food insecurity for the homeless.

Champanich worked in audio-visual (“I don’t like the term ‘A/V guy’”) for 20 years. The working-class salary afforded him an apartment in Anaheim but little else. He adopted a frugal lifestyle out of personal philosophy and necessity.“I never liked to waste food,” he said. “Mostly cooked at home. ‘Going out’ was something if you were dating someone — or going to the movies.”

Top Ramen is “not really nutritious—empty calories and a bunch of sodium. But you can buy four for a dollar.”

Three years ago, Champanich lost his apartment and took to sleeping in parks or abandoned homes in West Anaheim with other people. In those initial months of homelessness, he depended on friends who invited him to their house for dinner, or took him a meal wherever he was staying. But Champanich stopped doing that, because “you don’t want to impose on people.”

He got EBT for a while, which let him buy food with relative ease, before losing his eligibility. That further limited his food choices, mostly to instant oatmeal and Top Ramen.

“It’s not really nutritious—empty calories and a bunch of sodium,” Champanich admitted about the latter. “But you can buy four for a dollar, and you take what you got and ya put it in it. Even meat.”

He pulls a weathered stovetop grate from his backpack. “You put that on a butane stove. Maybe you found a pot somewhere. Find some water, and boil it. There’s your meal.”Even during the hardest times, said Champanich, he never lacked for food. “I don’t beg for food. I don’t feel the need to,” he said. “Food happens. I don’t even think about it.”

“Pizza places throw away a lot of pizza. If it’s dry and clean and not soaking
under a bag of toilet paper, I’ll eat it.”

“You’re one of the lucky ones!” Harris says with a laugh. Champanich doesn’t carry much food on a day-to-day basis because it “just weighs you down. You need to have just the absolute necessities.” But camping with others allowed for some food security. People could stock up and take turns guarding their makeshift pantry. He sometimes dumpster-dived at restaurants, grocery stores and homes, and found each setting had its own quirks.

“Pizza places throw away a lot of pizza,” Champanich volunteered. “If it’s dry and clean and not soaking under a bag of toilet paper, I’ll eat it.”

The pickings were always slim at supermarkets, because they only threw out rotten food. Trash bins near homes and apartment complexes, on the other hand, rewarded Champanich with virtual feasts. Perfectly good meat and vegetables, loaves upon loaves of bread and buns. One time, he found “a bunch” of frozen tilapia and turkey burgers that he gave out to others.

“People throw away a lot,” he says. “It perplexes you.”

The menu options became better when Champanich moved to the Santa Ana riverbed about a year ago. Almost daily, nonprofits, church groups and random individuals brought food to the largest encampments—one was near the Orange Crush freeway interchange, another next to Angel Stadium. During the baseball season, Halos fans who tailgated in the parking lot before games frequently left their extra barbecue and tacos to the homeless, handing it to them over a fence that separated the two groups.

“You eat food as it’s available.
When you get it, you eat it.”

Sometimes, Champanich and Harris ate fully catered meals; other times, just hot dogs and hamburgers. One group brought boxes of Little Caesar’s pizzas every Sunday for months until a “snatchy grabby” homeless person spooked them. Another time, a man unloaded cases of what Champanich described as “weird, canned drinking water. It tasted like carbonated tap water.”

“It was fine,” he added. “None of [what people gave him] was deplorable. It wasn’t unbearable to eat.”

People would even leave gift certificates to restaurants, but Champanich dismissed such presents as “not economical. Like, you’d have to find a ride to a restaurant. And then people would just look at you weird while you’re just trying to get food.”

Riverbed residents supplemented the donated food with their own canned and dried goods. Some people kept coolers and ice and stuffed them with perishables that usually went bad fast. Rice and beans, and pastas were popular meals, because they kept well.

People tried to pool together what they had so that everyone could cook and eat together. No one was ever left hungry. “You didn’t have the people sitting and watching” others eat, Harris said. “Everyone ate. It didn’t matter whether you put in or not.”

County officials promised to provide meal vouchers to the displaced, but one homeless advocate claims few have received them.

“They would quickly go after everything,” Harris said.

Eating has become harder for the homeless since the county cleared out the riverbed, along with another big encampment, the Plaza of the Flags at the Santa Ana Civic Center. The nonprofits and churches that served food at the two spots for years don’t know where to find their former clients. County officials promised to provide meal vouchers to the displaced, but homeless advocate Mohammed Aly claims few have received them.

Champanich remains nonchalant about his abilities to source his next supper.

Recently, a group of Muslim women held a lunchtime rally at Twila Reid and approached Champanich and a group of other homeless afterwards with their leftovers. “Chicken, rice, quinoa, flatbread with cheese, vegetables and sauces,” he says. “It was a different taste to my palate. I can’t even describe the flavors, but it was good.”

He visits nearby motels during the day, where some nonprofits leave food.

“One day a guy showed up with frozen breakfast sandwiches and waters at the Covered Wagon,” an Anaheim motel to where many riverbed homeless relocated. “And then he just left.”

Harris isn’t as optimistic. He’s already hearing stories about homeless assaulting each other for food.

Living Homeless in California: On the Street, There’s More to Eating Than Food