Last month the U.S. Drought Monitor declared California drought-free for the first time since 2011, thanks to a series of winter storms. But the long-term prognosis is for more droughts and severe weather, which will profoundly affect state agriculture. While farmers and lawmakers are taking notice, few see an immediate threat.

However, a 2018 report published by Agronomy, a peer-reviewed, open access scientific journal, laid out a stark future for California agriculture, predicting it will be vastly different by the end of the century. Led by Tapan Pathak of the University of California, Merced, the research team concluded that almost all of California’s crops, together valued at more than $50 billion a year, will be endangered by rising temperatures and unstable weather patterns brought by climate change. The state will face wildly fluctuating precipitation patterns, leading to severe droughts and flooding, warming temperatures, more heat waves, and shorter chill seasons. The researchers wrote that the increased rate and scale of climate change “is beyond the realm of experience for the agricultural community,” and that changes in the state’s crop output “would not only translate into national food security issues, but also economic impacts that could disrupt state and national commodity systems.” 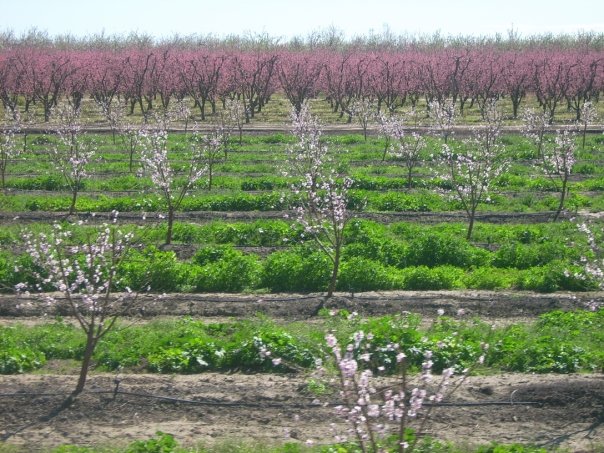 The report published on the Agronomy site is the latest evidence of threats facing California agriculture due to climate change, and those threats could have reverberations throughout the country and the world. California produces 13 percent of the crops in the U.S. and is nearly the nation’s sole producer (more than 99 percent) of walnuts, dates, figs, artichokes, pomegranates, peaches, grapes and kiwifruit.

At one “listening conference” held last year in San Diego County by the California Climate and Agriculture Network (CalCAN), farmers and ranchers said they’re already feeling the effects of climate change in the form of heat waves and uncertain harvest dates, said CalCAN executive director Renata Brillinger. The growers were looking for recommendations, rather than strict mandates, about what they should plant.

It requires a gallon of water to grow a single almond.

“We’re at a moment of clarity across the agriculture industry and the state regarding climate change,” said Brillinger. “After the deepest drought in the state’s history, plus two years of wildfires, there have been many wake-up calls.”

Medium- and small-scale farmers are asking for tools to help them better forecast wild swings in weather, Brillinger added. She pointed to one promising response, the “Ag Adaption Tools” bill (Assembly Bill 409), which would establish a grant program to develop easy-to-use computer modeling that would help farmers decide which crops are best suited to their areas. The bill also provides strategies for diversification, plus peer-to-peer training and networking. Eric Larson, executive director of the San Diego County Farm Bureau, told Capital & Main that, while Southern California has experienced warmer than normal weather, long-term climate change is not as important to farmers as short-term costs: how much they’ll get for crops and the cost of water.

“For those who use municipal water, which is very stable due to a broad portfolio of sources in San Diego County, farmers are worried about going out of business if the price of water keeps rising beyond what they can afford,” explained Larson.

High value crops – apricots, apples, cherries and pears – are, according to one report, the most vulnerable to climate change and could disappear from the San Joaquin Valley.

Last year the state’s Natural Resources Agency published a climate adaptation guide, with advice for farmers on anticipating declines in water quality, decreases in crop yields and the growing threat of pests. But there’s general agreement—even from fierce water management advocates—that it’s not the state’s job to tell farmers what to plant or where.

Low-value crops, like alfalfa and cotton, yield a low price per acre, and tend to be very “thirsty.” Ironically, the high value crops – fruits and nuts – are, according to the Agronomy-published report, the most vulnerable to climate change. Combined, those effects will make swaths of the San Joaquin Valley no longer viable for growing tree fruits like apricots, apples, cherries and pears.

The sustainability of growing almonds, in particular, has come into question in recent years. It requires a gallon of water to grow a single almond. California provides 80 percent of the world’s supply of almonds, and in 2016 the crop was estimated to be worth more than $5 billion.

Peter Gleick, president emeritus at the Pacific Institute, said farmers won’t change until they experience several back-to-back bad years, or unless the state intervenes, which it is unlikely to do. Gleick recommends a multi-faceted approach to helping farmers adapt. “Changing crop subsidies at the federal level would be very effective,” he said. “We planted a lot of cotton for a long time until cotton subsidies were cut back.” Gleick also recommends grants for irrigation technology and low-interest loans as part of state or federal farm bills, as well as state funding for water infrastructure upgrades.

While California likely won’t tell farmers where and what to plant, it could force their hand by telling them how much water they can use. That’s where a law with potentially the greatest impact on agriculture comes in. Passed in the middle of a drought in 2014, the Sustainable Groundwater Management Act (SGMA) requires local agencies to develop plans to bring groundwater use to sustainable levels by the early 2040s.

“Some of the changes needed with be hard and expensive — a problem for many small farmers.”

It may also require land to come out of production, especially in the southern San Joaquin Valley, Brillinger said. “Farmers in the Valley are in a tough place with reduced surface water allocations and, soon, restrictions on groundwater use. Creative and multiple solutions will be needed.”

Marcia DeLonge, a senior scientist in the Food and Environment Program of the Union of Concerned Scientists, agrees about multiple solutions, and recommends using the carrot approach, rather than the stick, to help farmers adapt.

“Some of the changes needed with be hard and expensive, and that’s a problem for many small farmers who are already operating on the margins,” DeLonge said.

One response that has near unanimous support from both policy advocates and farmers who have tried it is the Healthy Soils Program from the California Department of Food and Agriculture. It provides funding for farmers working to reduce greenhouse gasses and offers them adaptive strategies for farming in a changing climate.

There is no single way forward. In dealing with climate change, farmers and policymakers need to use more than one tool at a time, DeLonge said. “There’s not going to be a silver bullet.”