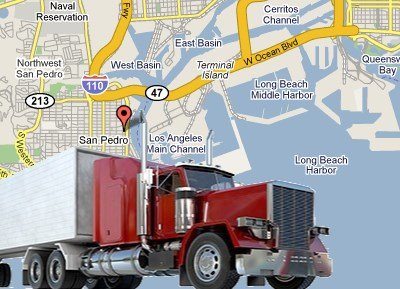 Several leading port trucking companies have taken a bold new position in the ongoing battle over whether or not they are misclassifying drivers as independent contractors. In recent filings with the U.S. District Court, they have attempted to position themselves as beyond the reach of California’s employee protection laws. In effect, they are saying that whether or not they are misclassifying drivers there is nothing the State of California can do about it.

Some background: Of the approximately 12,000 port truck drivers in Southern California – about 110,000 nationwide – the overwhelming majority are improperly classified as “independent contractors.” This has dramatic repercussions, as these low-income, mostly immigrant drivers are thereby denied basic workplace rights and protections: no minimum wage or overtime or OSHA protections, no disability or workers comp or unemployment insurance, no legal right to organize a union. Instead, drivers are saddled with payments for the trucks they drive, leaving them to sometimes make pennies per hour for a 60+ hour work week.

Recently, various levels of government have taken notice and begun to address a scheme that deprives the public of millions in unpaid taxes. In recent years, both the federal and state governments have filed lawsuits against California port trucking companies over their misclassification of drivers, and the state Labor Commissioner has begun to hear some of the hundreds of driver claims seeking redress. Unsurprisingly, once the facts come to light drivers are being ruled employees: Of the 19 identified Labor Commissioner rulings in the past year or so, all 19 have found drivers to be illegally misclassified, and owed an average of about $66,000 each. (The Labor Commissioner uses a stringent, multi-factor test.)

From the industry’s perspective, this is an existential battle. Just at the Ports of L.A. and Long Beach, trucking companies may be looking at well over $1 billion in liability for past wage theft. And in addition to the financial hit, if trucking companies were to recognize drivers as the employees they actually are then it would mean granting drivers some degree of rights on the job, and possibly a voice in their working conditions.

In other words, the industry seems to be getting desperate.

In the fall of 2012, several industry leaders went on the offense, filing a novel lawsuit asking the court for “a Temporary Restraining Order prohibiting the Labor Commissioner… from investigating, processing, or proceeding to hearing on any claim” brought by drivers against these companies. These companies were asking a federal court to order the California Labor Commissioner to stop doing her job. Earlier this year, the complaint was dismissed.

But these companies came back in August with a different complaint, and the same request. This time, they spelled out their argument more fully. Because drivers are involved in interstate commerce, the companies argue, this “exempts Plaintiff [trucking companies] from complying with California’s wage and hour and employee-related laws.”

For years these companies have argued that drivers are truly “independent.” So why now are they changing tacks? Why not take their argument to the Labor Commissioner, or to court, and argue the merits of their case regarding driver independence? Why are they so adamant now about being exempt from the laws at all? Because they acknowledge they’re losing:

“Based on the findings from the [Labor Commissioner] hearings [against one company] where the facts… were identical in every respect to the [hundreds more] claims currently set for hearings, Plaintiffs… believe… that the outcome of those hearings will be no different than the [previous] hearings… resulting in findings of employee-employer relationships and fines, penalties and back wages.”

Make sense? These trucking companies seem to realize that they have been caught engaging in a massive fraud. Most responsible companies would either change their practices or argue that the Labor Commissioner is wrong. These companies instead chose to take a third path: arguing the laws don’t even apply to them.

And the suit contains even more dire claims. One of the companies – already hit with a $179,000 judgment for two misclassified drivers – predicts that if this ruling stands, “Plaintiff TTSI would have been forced to either close down shop or convert each of its independent contractors to employees (assuming they would be willing to give up their business and become employees).”

This is a strange claim, since this company already did convert all of its drivers to employee status, when the Port of L.A. required it in 2008. (The requirement was since thrown out following a different court battle, and the company quickly returned to the status quo ante.) The sky did not fall then; the company continued to operate (though its then-employee drivers allege the company still violated wage and hour laws).

The cherry on top of the industry’s disingenuousness sundae is the implication that drivers might not want to be recognized as employees. I asked Dennis Martinez, a driver at this very company, what he thought about that.

Martinez laughed: “Give up my business? I have no business to give up. I drive the company’s truck, I do what the company tells me to do, just like any other employee. We all know we’re employees, not independent businessmen. We just want the companies to finally treat us that way.”

Why I Support the Social Workers Strike