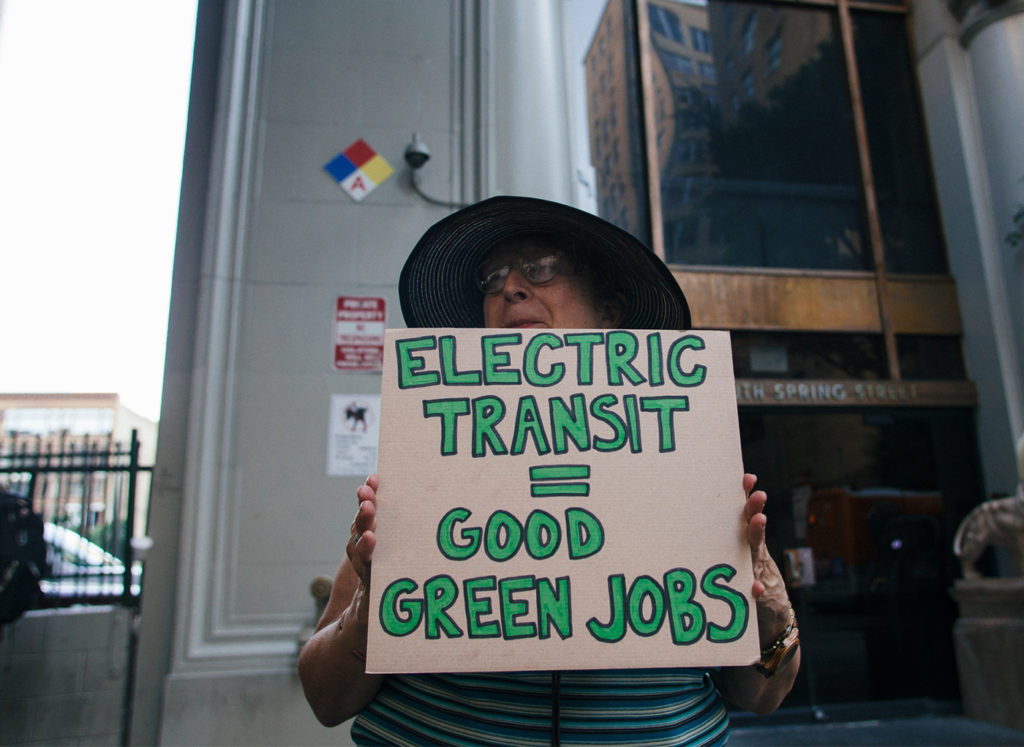 Electrician Francisco “Paco” Arago attends a California Public Utilities Commission community meeting on electric transportation. Arago, a Boyle Heights resident, says he doesn’t know how he will continue to raise his family in such a polluted area of the city. (Photos: Joanne Kim)

Union members, environmental justice advocates and green transportation activists packed a meeting room Tuesday evening in Downtown Los Angeles to send a loud and clear message to the California Public Utilities Commission (CPUC): the city and state should make electric transportation in the city and at the Los Angeles and Long Beach ports a priority.

The Clean Energy and Pollution Reduction Act of 2015 (Senate Bill 350) requires utilities to present programs to accelerate the widespread use of zero emission vehicles over the short term and longer range.  Southern California Edison, San Diego Gas & Electric, and Pacific Gas & Electric, utilities providing about three quarters of California’s electricity service, have all proposed paths to zero emissions, and the CPUC hearing was part of the public process to weigh the merits of those proposals.

“The natural gas industry sees electric vehicles as the future . . . That’s why SoCalGas is fighting Edison on this. They’re opposed to electric across the board.”

The new proposals include programs to accelerate the adoption of light-duty EVs (electric vehicles), but also address trucks, buses, port equipment, forklifts, and the other vehicles that move people and goods in bulk in an effort to reduce diesel pollution.

Pacific Gas & Electric has proposed spending $250 million over five years to install infrastructure to electrify fleets of medium and heavy-duty vehicles. That infrastructure includes all the necessary electrical equipment from the transformer down, but not the actual charging stations. San Diego Gas & Electric proposed a $244 million outlay for its five-year program to install 90,000 charging stations at homes in the San Diego region at an estimated 71 cents monthly cost to its customers. The most ambitious proposal has come from Southern California Edison, which includes $554 million in infrastructure to electrify vehicles and equipment moving goods from the Port of Long Beach. PG&E estimates its customers will see a 28-cent hike in their monthly bills while SoCal Edison customers will pay 53-cents more a month.

But the Southern California Gas Company (SoCalGas) is determined to protect its piece of the energy pie. If SoCalGas’ arguments to the CPUC are effective, none of the electric utilities’ proposals will be adopted.

Clean Energy Fuels Corp. attorney J. Nathan Jensen urged the CPUC in August to make “cautious, measured movement toward electrification in the off-road, medium-duty and heavy-duty (MD/HD) sectors of the transportation market.” The MD/HD electric vehicle market has “only limited areas of early commercial readiness,” he said in written testimony submitted to the commission.

“Ratepayers are already being asked to shoulder market development costs as the utilities experiment in the MD/HD market,” Jensen said. “Asking them not only to assist customers in funding infrastructure but to allow the utility to earn a return on that assistance is unreasonable.”

Adrian Martinez, an attorney with Earthjustice, said after the meeting that SoCalGas is mostly worried about its own bottom line.

The company “is basically arguing that the natural gas infrastructure is already installed, and therefore there will be stranded assets and harm to ratepayers if the CPUC allows electric vehicle infrastructure to be installed,” Martinez said. “But it’s SoCalGas and other gas companies that will be hurt.”

Melissa Bailey, a spokeswoman for Sempra Energy, parent company of SoCalGas and San Diego Gas & Electric, rejected the contention that it was a utility vs. utility fight. For heavy duty trucking, Sempra is touting natural gas engines fueled by biogas, made from green waste, waste water, and other organic sources.

“Natural gas and biogas engines reduce the emissions of smog forming pollutants to nearly zero,” Bailey said. “When fueled by biogas, these natural gas engines actually deliver lower greenhouse gas emissions than electric ones. That’s because biogas takes climate pollutants out of the air and uses them as clean, renewable fuel instead.”

“Those vehicles still have tailpipes that still emit greenhouse gasses,” Nagy said. “And gas companies still need to build out infrastructure to move the gas from farms to the consumer, which undercuts their argument about stranded assets.” Food & Water Watch supports the use of biogas onsite, she said, but not for widespread consumer distribution.

Kathleen Woodfield, of the San Pedro Peninsula Homeowners Coalition, gave Capital & Main a letter she had sent to the ports of Los Angeles and Long Beach regarding possible SoCalGas interference at a joint Clean Air Action Plan hearing in August.

Woodfield wrote that on the evening of September 1, a woman approached her and said that she and 35 other people had been hired to give pro-natural gas testimony at a Clean Air Action Plan hearing, and that about 35 other people were each paid $60 and were given a free dinner for similar testimony. The woman said she had been hired by a PR firm called Method, Woodfield said.

Martinez said such tactics to sway regulators, if true, wouldn’t surprise him.

“They’re desperate,” Martinez said. “The natural gas industry sees electric vehicles as the future, and they don’t want to lose their market share. That’s why SoCalGas is fighting Edison on this. They’re opposed to electric across the board.”

At the downtown CPUC meeting, Jennifer Kropke, Director of Workforce and Environmental Engagement at the International Brotherhood of Electrical Workers Los Angeles area Local 11, testified that Edison’s approach was bold, and that it was the perfect nexus of “good, green jobs paying a living wage to local workers, and cleaner air for people who live near our ports.”

Kropke also emphasized, as did many others at the meeting, that building out EV infrastructure solves a chicken or egg problem. “It is easier to transition to EVs when the charging infrastructure is in place,” Kropke said after the meeting.

The CPUC hearings on the electric utilities’ proposals will be wrapped up in the next three weeks. Decisions on whether to approve or deny a proposal are expected early next year.