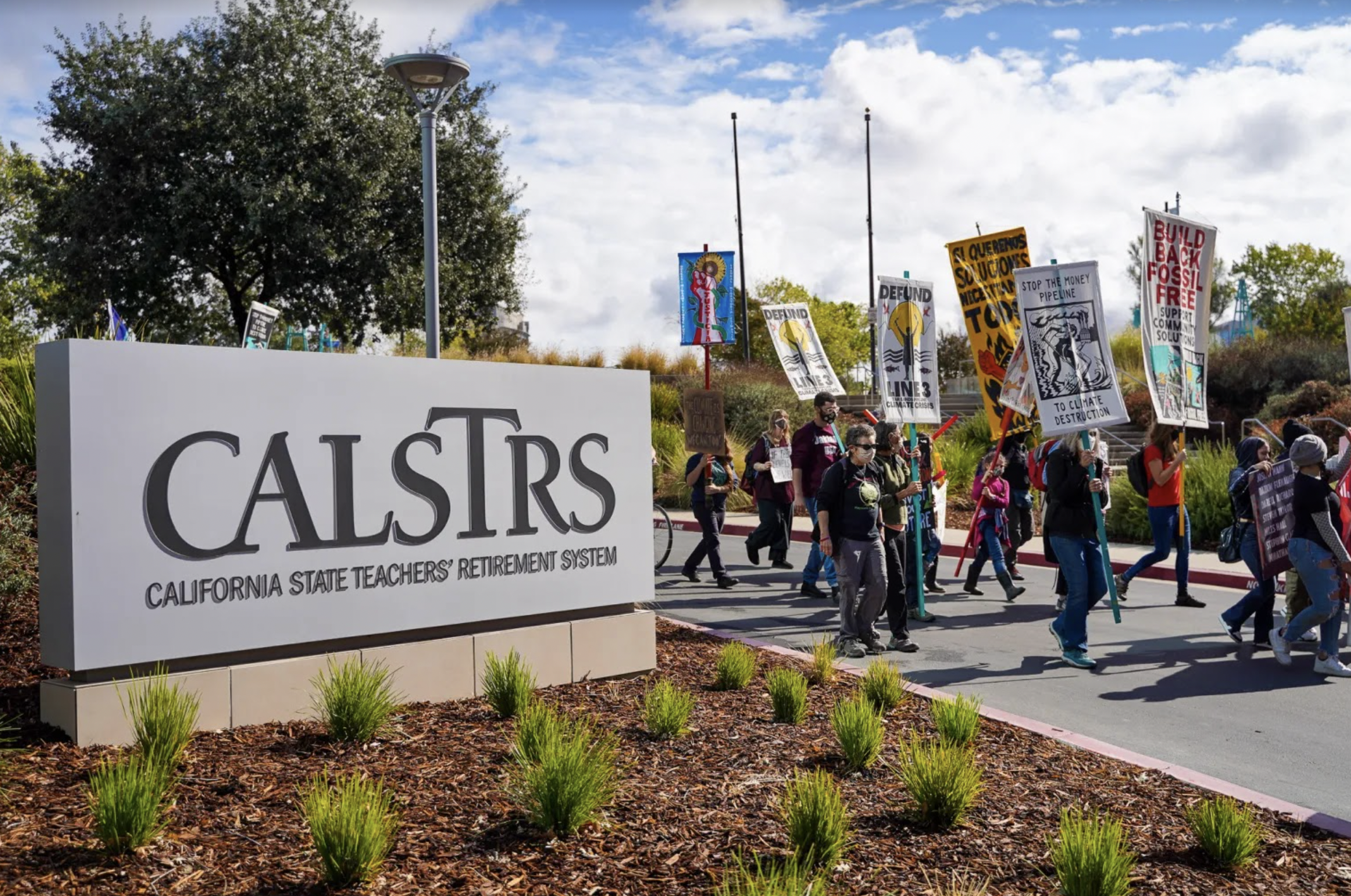 After narrowly passing the California State Senate, the Legislature’s fossil fuel divestment bill, SB 1173, recently met a silent death in the Assembly, where it didn’t even come before a public hearing. Instead, a single Democratic lawmaker refused to take up the legislation in his committee, which it needed to pass in order to advance to the Assembly floor for a full vote. It was an anticlimactic defeat for a bill supported by more than 100 environment and climate-focused groups and others, including the state Treasurer’s Office, the city of Los Angeles and the California Federation of Teachers.

Despite advocates’ extensive campaign to contact and nudge legislators on the fence, the bill — which would have directed managers of two state pension funds to divest upwards of $11 billion from the 200 largest oil and gas companies within eight years — succumbed to a bureaucratic quirk of the California Legislature, where some legislators carry outsized power to shape the state’s agenda and priorities. Because next year is the start of a new two-year session, any lawmaker interested in taking up the bill’s purpose will have to draft a new bill and lobby for its passage in both chambers all over again.

Having identified the committee process as a chokepoint for climate bills, Capital & Main spoke with divestment bill author Sen. Lena Gonzalez (D-Long Beach) to learn what went wrong and whether such bills can succeed in the future.

Sen. Lena Gonzalez: Well, we thankfully got it out of the Senate, which was a difficult feat on its own. It eked out with just 21 votes. We knew it was going to be an uphill battle getting it through the Assembly, especially with the Public Employment and Retirement Committee. You’ve got the chair, Jim Cooper, you’ve got Assemblymember Patrick O’Donnell (D-Long Beach), Assemblymember Ken Cooley (D-Sacramento) … members that are not, I think, historically inclined to vote for divestment bills.

The Assembly committee chair has a lot of autonomy, whereas in the Senate, we’re more than likely hearing most bills, unless we work it out with the author of the bill to hold it for whatever reason. So Cooper just decided he wasn’t going to hear it. Which I think stymies the democratic process. I was fully prepared to present the bill even if it was going to get zero votes. At least let the bill be heard. My hope is that we can start gaining more support for the bill through this year and bring it back up next year.

[In a statement sent to Capital & Main, Cooper reiterated his standard opposition to any bill mandating state pension fund divestment.]

“The fact that Assemblymember Cooper didn’t have to hear this bill is an issue in this democratic process.”

Was there any way to maneuver around this? Could your office, or some of the advocates, have asked for private meetings with Cooper’s office?

They met with him quite a few times and with other members. And when I talked to other members, it was black and white. They couldn’t see the gray area, they couldn’t see the path, they said, divestment isn’t something we believe in. And I was even talking to some of the pension fund board members and collecting information from the University of California chief investment officer, who gave me great information on why they decided to divest and why it was an important decision to do now, even with high gas prices and inflation. My team and I spoke with Trilium, which was ready to be a witness for us, and one of their chief investment officers as well. So we did a lot of homework. But I felt like everyone just threw it aside, as though it was too ambitious to get done.

Obviously we’ve just had so much influence from the oil and gas industry. The bill originally said a five-year time horizon, and I had to take an amendment in the Senate Judiciary Committee to push it out to eight years. We’ve seen other portfolios that have divested within a year. Portfolios with far more invested in fossil fuels than what we have in our own state pension funds, which is up to $11 billion.

It sounds like you’re saying much of the blame can be pinned on CalPERS and CalSTRS. Can anything be said about whether California’s legislative process, or maybe the process of political coalition building, is at fault?

I’m reflecting on that because the fact that Assemblymember Cooper didn’t have to hear this bill is an issue in this democratic process. Overall, I think we are a leader in terms of the environment — people like to say in California, we’ve done all this climate-forward policy. And we have, but we’re also a very large state with very diverse needs. We’re all very different shades of blue, so not all of us subscribe to the same notion of climate actions. Some of us don’t even subscribe to that. So it’s not enough to say we’re a progressive state because we’re a supermajority. We’ve really got to be thoughtful in our approach to the environment. It has to be about putting our money where our mouth is, in terms of our values.

“Sometimes the politicians are only thinking about whether the oil and gas industry is going to support them in political campaigns.”

Last year, the big climate bill was SB 467, which was a hefty package of regulations on the oil and gas industry in California. It was rejected in the Senate’s Natural Resources and Water Committee — three Democrats failed to approve it, joining GOP members. So it’s now been two years in a row in which the biggest climate-focused bills of each session were defeated. And it’s come down to these committees in both chambers. How can climate-focused advocates and legislation maneuver through committee opposition?

I think at the end of the day, sometimes it just comes down to politics, unfortunately. And sometimes, the politicians are only thinking about whether the oil and gas industry is going to support them in political campaigns, or pissing off our friends in the State Building and Construction Trades Council of California. I hate to be so simplistic about it, but sometimes that’s just what it comes down to.

When SB 1173 passed on the Senate floor, Sen. Nielsen (R-Butte County) dismissed it as a “statement.” Can you describe how the bill would have served the interests of your constituents?

The bill came from one of my constituents. He was a Sierra Club member, he’s an environmentalist back home in Long Beach, and he wrote an op-ed in the local newspaper in Long Beach saying we should divest fossil fuels from CalSTRS and CalPERS pensions. And if anybody can do it, Lena Gonzalez can do it. And many of my constituents are educators, or they were educators for a long time and are retired now. A lot of them have grown up and lived in Long Beach and in Southeast L.A. near refineries, they’ve grown up near the coast, so they are just naturally, innately, environmental.

Secondly, the financials — with the war in Ukraine and oil prices that are very high — I’ve been told by many economists and experts that the time to get out is now.

Now that the divestment bill is dead, are you sponsoring other climate or environmental bills? Any others on your radar for this session that have a chance of passing?

I’ve got a few on the clean vehicles side. SB 1382 provides a sales tax exemption for the Clean Cars 4 All program and makes it more equitable. We’re doling out all these dollars, up to $9,500, which is what a Californian can get for turning in their old clunker and getting a zero emissions car. The data shows we’re really not penetrating the lowest of the low income communities, especially in these horrible air-quality areas, Southeast L.A. and Boyle Heights, places I know need to start transitioning. So my bill would give an exemption on the sales tax, which for a $30,000 car, you could get up to a $1,500 tax rebate.

I have another for creating a zero emissions vehicle equity advocate. I know there’s also SB 54, a plastics bill, which I think is huge. That’s another big one going on. But there’s quite a few good bills out there that are happening, which I’m excited to see.