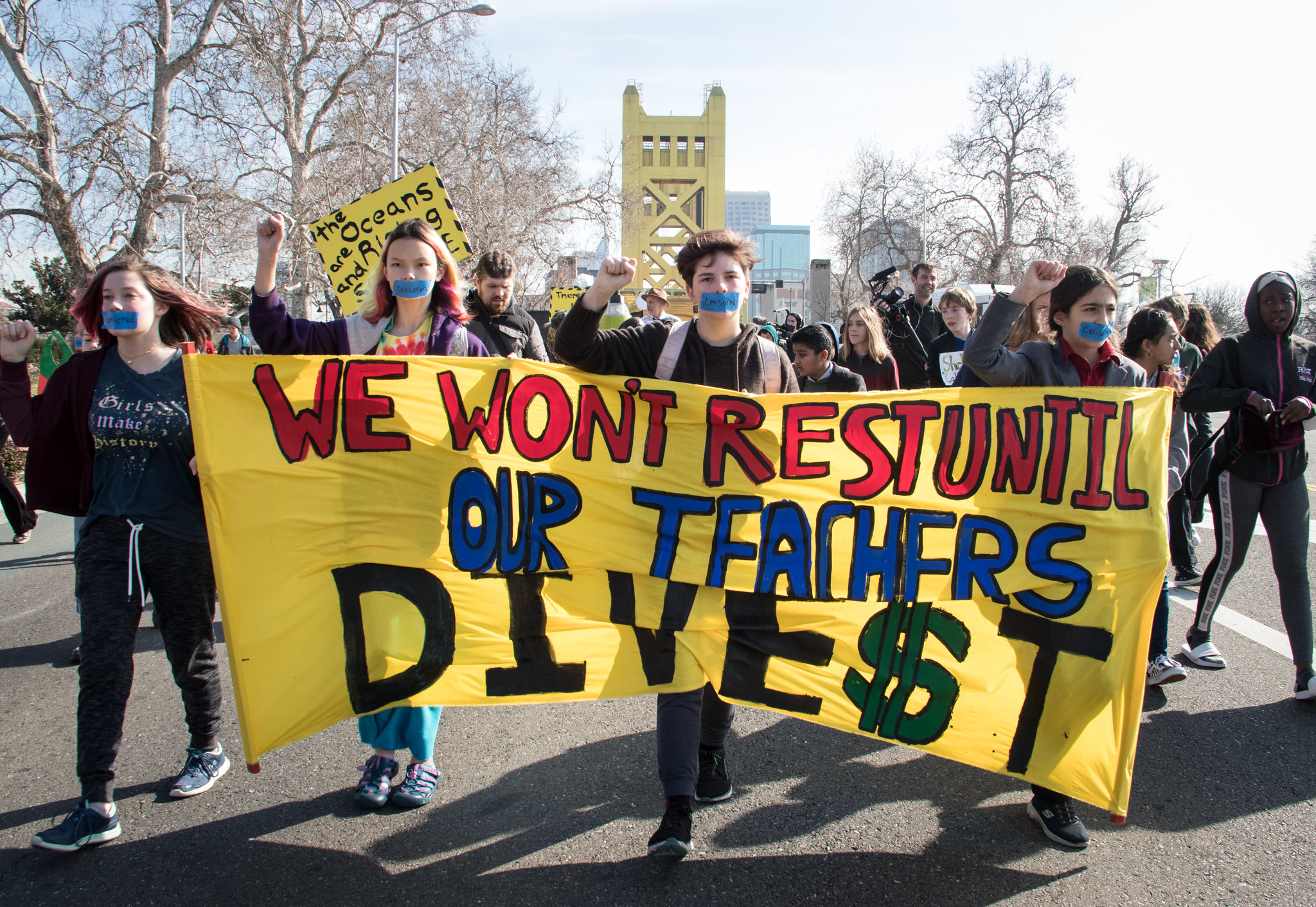 One of California’s biggest environmental bills with a chance of passing into law this session would divest billions of dollars from fossil fuel companies by directing managers of California’s public pension and teachers’ retirement funds to stop investing in the 200 largest oil, gas and coal companies. If it becomes law, California would join New York and Maine in dropping planet-warming assets.

Some have called the bill merely a symbolic gesture, but as the legislation would apply to the two largest pension funds in the country, its passage would be a significant development for the broader fossil fuel divestment movement. Supporters of the bill, including the California Faculty Association and 150 climate-focused organizations, say every dollar divested from the industry means less emission of greenhouse gasses, helping to stave off the worst of the climate crisis.

But SB 1173 has met with steep resistance. It barely passed in the Senate last month, where it received 10 no votes, including from vocal champions of the oil and gas industry. Another nine legislators, including several Democrats, did not vote, which is functionally the same as voting no.

Now that the legislation is in the Assembly, advocates are focusing on a key potential roadblock: Assemblymember Jim Cooper (Sacramento), a Democrat, who chairs the Public Employment and Retirement Committee. The bill will be heard before Cooper’s committee on June 22, and Cooper’s past opposition to divestment legislation troubles supporters, according to Miriam Eide, the coordinating director for Fossil Free California.

Opponents of the bill say it may violate the fiduciary duty of fund managers to invest in ways that are the most financially beneficial for pensioners.

“Given who Cooper is, I think it’s absolutely possible the bill makes it through the committee, and also absolutely possible he uses his power as chair to shut it down,” Eide told Capital & Main. “So we’re doing all we can — we’ve beaten the odds, [the bill] beat odds in the Senate, and we think it can happen again.”

Cooper’s district includes a southern portion of the city of Sacramento and extends down into San Joaquin County, nearly reaching Stockton. The area has already been affected by climate change, such as dwindling snowpack from the Sierra Nevada, leading to an ongoing water shortage. Wildfires in the surrounding areas have also degraded air quality.

Cooper, whose staff didn’t return requests for comment, previously opposed a bill directing the California Public Employees’ Retirement System (CalPERS) and the State Teachers’ Retirement System (CalSTRS) to stop investing in companies that burn coal to generate electricity. That bill was signed into law by former Gov. Jerry Brown in 2015. Though Cooper wasn’t chair of the Assembly’s retirement committee back then, he voted against it in a floor vote.

Eide says environmental groups are planning a phone blitz to on-the-fence assemblymembers, including Cooper, after the strategy appears to have paid off in the Senate. It may have been key to getting support from Sen. Steven Bradford (D-Inglewood), who has taken tens of thousands of dollars from the oil and gas industry but nevertheless supported the divestment bill.

Environmentalists argue that divestment from fossil fuels makes good economic sense, since the climate crisis demands a rapid shift to clean energy over the next two decades.

Opponents say the bill may violate the fiduciary duty of fund managers to invest in ways that are the most financially beneficial for pensioners. Both pension funds also oppose it, and claim it could cost more than $100 million to carry out its mandates. In an analysis, CalSTRS said the bill would limit its ability as a major investor to engage with fossil fuel companies and get them to take steps in the right direction, noting that it advocated for climate-conscious board members at Exxon last year.

But Sen. Lena Gonzalez (D-Long Beach), who sponsored the bill, said CalPERS and CalSTRS would have eight years to divest and another five if necessary, and managers could even refuse to implement it based on their own good faith analysis.

Environmentalists also argue that divestment from fossil fuels simply makes good economic sense, since the climate crisis demands a rapid shift to clean energy over the next two decades. They hope that Cooper and other members of the Assembly retirement committee agree. Because there are currently only six committee members, including four Democrats, they need Cooper to at least not actively oppose the bill.

“The chair often sets the expectation for what the vote outcome often is, and so getting the chair’s abstention at least, if not support, is very important for the bill to pass,” Eide said.