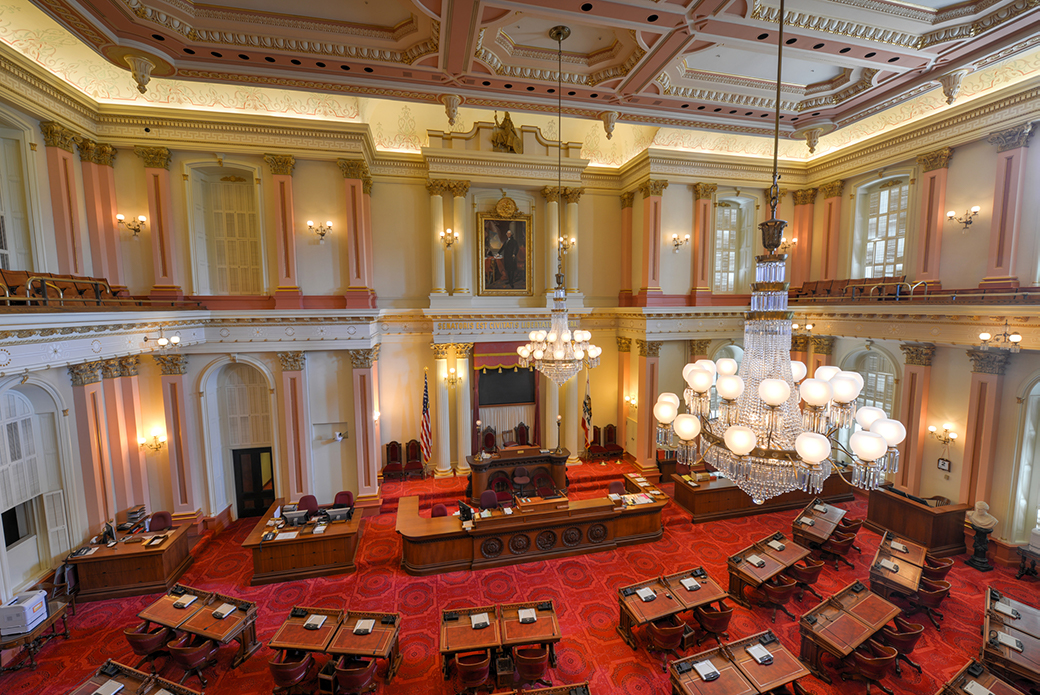 An empty Senate Chamber in the California State Capitol building in Sacramento, California. Photo by Demerzel21.

California leads the nation when it comes to proposing far reaching legislation for cutting greenhouse gas emissions and regulating the oil and gas industry, but much of it is doomed to fail because it never gets out of committee for a full vote, thanks to a mix of strategically appointed industry friendly Republicans and moderate Democrats.

While the state Assembly has seen at least one ambitious climate bill pass this year, the state Senate’s smaller size makes it easier to analyze what happens behind the scenes.

Take, for example, SB 582, the Climate Emergency Mitigation, Safe Restoration, and Just Resilience Act. It started with a baseline requirement that California reduce its greenhouse gas emissions to 80% below the 1990 level by 2030, an urgent proposal prompted by California’s rapidly changing climate. Public expenditures on climate resiliency projects would prioritize the “most vulnerable communities.”

The Western State Petroleum Association lobbied against it, and after moving through three committees, that figure was reduced to 40%. The bill’s author, state Sen. Henry Stern (D-San Fernando Valley), was not available to say who added the amendments, but the change was significant enough that he has held the bill from going to a vote on the Senate floor. Stern is the chair of the Natural Resources and Water Committee, a key body for passing climate legislation.

It also faced uniform opposition from Republican members in the Senate Environmental Quality Committee, the Senate Natural Resources and Water Committee and the Senate Appropriations Committee. Bills go to certain committees based on which sections of the California Codes they would amend once passed into law.

Committee appointments are the result of behind-the-scenes jockeying by party leaders, who recommend legislators for appointments to Sen. Pro Tem Toni Atkins (D-San Diego County), the most powerful member of the Senate. This informal tradition, in which the senator pro tem is guided by recommendations of party leadership, gives outsize influence on climate bills to GOP legislators, who are in an extreme minority overall. Atkins herself has taken $107,000 from the oil and gas industry throughout her career, and has stressed the importance of a politically “balanced” approach throughout her time in the legislature.

The appointment of state Sen. Shannon Grove (R-Bakersfield) to the Natural Resources and Water Committee earlier this year was as close to a coup as the oil industry could get. Grove and another senator, Brian Jones (R-San Diego), voted against SB 582 in the committee. In the Senate Judiciary Committee, where Jones was also appointed, the senator voted against SB 260 (Climate Corporate Accountability Act), another big impact bill that would have required large corporations to report their total greenhouse gas emissions. Grove and Jones claimed the bills were anti-business. Throughout her four year career, Grove has taken $117,475 from the industry; Jones has taken $67,300.

Swing vote Democrats on critical Senate committees are being heavily lobbied by the Western States Petroleum Association and the State Building and Construction Trades Council, which made a pact to resist tighter regulations on the industry.

SB 260 was eventually placed “on suspense” in the Senate Appropriations Committee, meaning committee leadership could stall or bring it up again based on budgetary considerations. There are several consistent allies of the oil and gas industry on the committee, including Sen. Bates, Sen. Jones and Sen. Steven Bradford (D-Los Angeles), the last of whom has taken $137,569 from the industry throughout his career. The committee’s chairman, Sen. Anthony Portantino (D-San Fernando Valley/San Gabriel Valley), has taken at least $29,925 from the oil and gas industry since 2006.

Swing vote Democrats on critical Senate committees, meanwhile, are being heavily lobbied by the Western States Petroleum Association and the State Building and Construction Trades Council, which made a pact to resist tighter regulations on the industry that was made formal in 2019 through a still-active corporate partnership.

The labor-oil alliance, while not inevitable, has succeeded three years in a row in killing legislation that would establish physical setbacks between oil production operations and human dwellings; the close proximity between them are  linked to poor health outcomes. The industry says such a mandate would be catastrophic for its ability to drill for oil in California, where wells are sometimes crammed alongside homes.

This year’s version, SB 467, was the biggest bill yet, starting as a ban on fracking and then, with input from environmental groups, was expanded to include a mandate on setbacks and a phaseout of enhanced oil recovery operations.

It was swiftly opposed by some powerful lawmakers, with Jones criticizing the bill, in remarks that seemed to echo industry talking points, at an April 13 Natural Resources and Water Committee hearing. He and Grove voted it down.

Senate Bill 47 would raise the spending cap on a California Geologic Energy Management Division account for plugging about 35,000 idle oil wells to $10 million annually, up from $1 million.

But the more pivotal no vote came from Sen. Susan Eggman (D-San Joaquin), who feared the bill would shut down the industry in her district. Equally important were abstensions from committee members Sen. Robert Hertzberg (D-San Fernando Valley), who is currently the Senate Majority Leader, and Sen. Ben Hueso (D-Imperial Valley).

They represent districts in which the industry employs significant numbers of people. Last year, these three Democrats took more than $200,000 combined from the State Building and Construction Trade Council or affiliated local unions, as well as the oil and gas industry.

The committee voted to reconsider SB 467 in January 2022.

While bills that promise to shake up the industry hardly seem to get off the ground, less ambitious proposals are sometimes able to avoid these obstacles. But experts say they do little to address the overall crisis.

SB 47, for example, sponsored by Sen. Monique Limón (D-Santa Barbara), would raise the spending cap on a California Geologic Energy Management Division account for plugging about 35,000 idle oil wells to $10 million annually, up from $1 million.

The account is funded by the industry, which fiercely opposed the bill. So did the State Building and Construction Trades Council and allied unions. During a Senate Natural Resources and Water committee hearing, Sen. Grove expressed concern that the funds would be used for other purposes.

But SB 47 passed through the committee, with aye votes from Hertzberg and Eggman. (Hueso was a no-show.) When it came to the Senate floor on June 1, all GOP senators opposed it, plus Sen. Bradford, who represents a portion of Los Angeles County that contains several oil refineries and the Inglewood Oil Field.

Yet the bill survived, even as its supporters acknowledged its miniscule impact, with Sen. Stern saying that the bill “won’t solve the problem” of abandoned wells. The sum involved hardly covers the existing liability of abandoned wells in California, which could cost upwards of $5 billion to plug and decommission — and taxpayers, not the industry, will most likely be on the hook. Idle wells leak carcinogens, methane and other greenhouse gases and damage aquifers.

Sen. Grove applauded the “tiny, incremental, itty bitty step” that the bill represented. Then she voted against it, without giving an explanation.

Now it is moving through the Assembly, hitting the floor possibly by September.