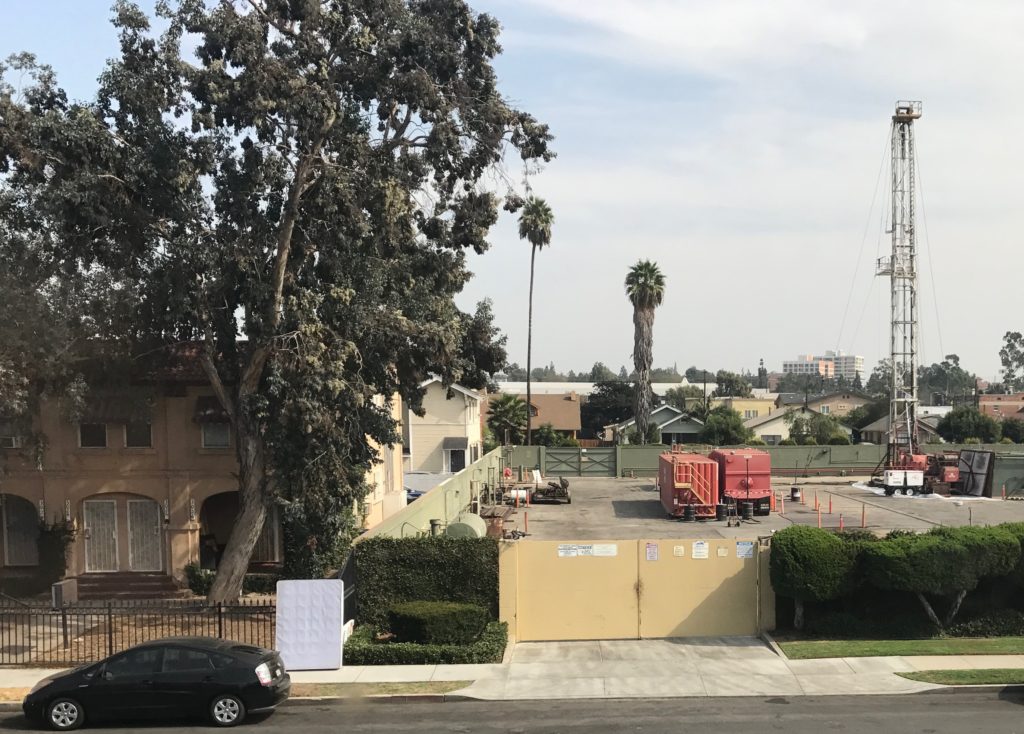 Neighbors: Oil platform in the middle of a residential neighborhood. (Photo: Larry Buhl)

At a site known simply as Jefferson, 36 oil wells are pumping closely – too closely, residents say — to occupied multi-unit apartment buildings at a drilling site on Jefferson Boulevard, just west of the University of Southern California. There is no noise buffer, vapor capture or enclosure around the site, and at one point there is no more than three feet between a resident’s bedroom window and the drill site wall. An Environmental Impact Report has never been done. Because the land was bought by Union Oil in 1965, the Jefferson drilling site predates the Environmental Protection Agency.

Corissa Pacillas said she has lived in a Craftsman-style building across from the Jefferson site for four years, and the oil production has made her sick at times.

“The noise pollution is severe when they’re putting pipes into the ground,” Pacillas said. “The chemicals that they use smell like rotten eggs. The area around here just stinks. The fumes give me headaches, and the neighbors have experienced that too.”

The Jefferson site’s operator, Denver-based Sentinel Peak Resources, doesn’t notify residents when toxic chemicals are being used in the neighborhood, said Niki Wong, a neighborhood resident and member of Redeemer Community Partnership, a community development nonprofit in South Los Angeles and a group opposed to urban oil drilling. “Sometimes we’ve seen four or five tanker trucks containing 5,000 gallons of hydrochloric and hydrofluoric acid,” Wong said. “After one of these acid jobs, all the plants downwind of the facility died.”

“There are studies that say explosions from sites like this could result in a 750 foot crater,” Wong added. “We are standing in a blast zone.”

Pacillas claimed she has to diligently monitor the company’s website to learn when production is underway. “The website that tells you when it’s going to happen is this long obscure [web address] that you wouldn’t be able to find if you didn’t know where to look,” she said.

Los Angeles is the most densely populated city in the country with oil drilling within its borders. It sits on top of one of the largest oil fields in the country, and oil fields are peppered throughout the region, usually hidden from sight. Some of the region’s biggest names, including Getty, Doheny and Bell, made their fortunes from oil after it was discovered that the area contained a huge stock of crude.

A 2014 report from the Natural Resources Defense Council estimated that one in three Angelenos live within a mile of an active drilling rig. The report also found that in Los Angeles County, more than half a million people live within 1,320 feet of an oil or gas well and that the vast majority of those residents are people of color.

A report from the Los Angeles-based Community Health Councils estimated in 2015 that 5,000 active oil and gas wells, spread across 10 oil fields and 70 different sites, were embedded in neighborhoods, parks and commercial districts throughout the city.

Though oil production slowed in the 1970s, new techniques like fracking (the injection of highly pressurized, chemical-laced water deep underground to break up rock formations containing fossil fuels) have returned some oil fields to production.

“Increased oil and gas production using these new technologies can bring more contaminants—many of which have been linked to respiratory and neurological problems, birth defects and cancer—to backyards, communities and cities,” the Natural Resources Defense Council report said.

In the wake of the Aliso Canyon natural gas blowout in 2015, which forced thousands to evacuate their homes in the San Fernando Valley, oil and gas development has been under greater scrutiny throughout Southern California.

For Angelenos living near drill sites, the battle is about health and safety, racial justice and, for some, faith and religion. For regulators, the issue is more about who is in charge of oil field operations within the city and what departments can hold drill site operators accountable.

In 2013 EPA investigators called a facility operated by Los Angeles’ AllenCo Energy “shoddy” after investigators who toured the site reported sore throats, coughing and severe, lingering headaches. Their experience prompted U.S. Senator Barbara Boxer to call for the site to be shut down. The Los Angeles City Attorney’s office demanded in 2016 that the company stop operations until it could meet stricter conditions, and AllenCo was also ordered to pay a $1.25 million.

Earlier this month, the city hit the Jefferson site and Sentinel Peak Resources with some of the toughest restrictions yet on an urban drilling. The Planning Department decision gave the company with 90 days to install new systems to continually monitor noise and vibration and to record video. The company must also measure air quality on the property’s perimeter, install new systems to capture emissions and build its walls higher to better enclose the site.

The decision was a response to a 2016 petition by the environmental law firm Earthjustice, which found that other sites in the city were quieter and had better protections for residents’ health.

Advocates for shutting down, or at least curtailing, drilling in Los Angeles are also enlisting faith leaders in their fight. And those leaders have found themselves arrayed against their colleagues of the cloth in  Los Angeles’ Roman Catholic Archdiocese.

The AllenCo drill site, near the University of Southern California, and the Murphy site in the historic West Adams district, sit on land owned by the L.A. Archdiocese. At a rally outside the archdiocese offices in early October, dozens of residents and faith leaders from South Los Angeles called on Archbishop José Gomez to terminate his church’s lease with the owner/operator of both sites, AllenCo Energy.

Rev. Oliver E. Buie of Holman United Methodist Church said he attended the rally because “God has called us to be good stewards over the earth. Many of the residents are not aware of these oil wells in their communities. People are . . . being harmed by these big oil companies that don’t care about the people, only the profits.”

Faith leaders attending the rally also pointed out that 40 Catholic organizations had recently pledged to divest from fossil fuels, and that Pope Francis stressed the importance of a carbon-neutral economy in a 2015 encyclical.

The archdiocese responded to protesters in a letter claiming it was not directly involved in the permitting process and does not operate the site. The letter also said the archdiocese was “working with the Mayor’s Office, the City of Los Angeles Oil Manager and AllenCo to explore possible alternative uses for the site in our continued commitment to the health and well-being of the entire community.”

Eric Romann, an organizer with STAND-LA (Stand Together Against Neighborhood Drilling), said the Archdiocese continues to avoid taking responsibility by not breaking its lease with AllenCo.

The archbishop “could shut down the AllenCo site with the stroke of a pen,” Romann said. “We want the church to be a good neighbor and not profit financially from something that’s poisoning residents.”

Ultimately, Romann said, STAND-LA and other community groups want urban oil drilling to end. Until that happens, they are demanding a 2,500-foot buffer between active drilling sites and homes, schools, churches and hospitals. The distance was determined after consulting experts in environmental burdens, the group said. That kind of setback could be difficult to achieve unless 90 percent of the city’s 322 active wells are shut down, according to the California Department of Oil Gas and Geothermal Resources.

Sabrina Lockhart, a spokeswoman for the California Independent Petroleum Association, which represents small oil producers, said shutting down wells on private property would be legally risky and, if successful, would lead to increased imports of oil and gas to meet the region’s needs.

“Los Angeles grew up around oil drilling, but recently producers have changed production techniques to have a much smaller footprint,” Lockhart said.

Industry opposition aside, there are indications that city and county officials are beginning to take the issue of urban drilling more seriously, even if it’s not clear exactly what can or should be done.

In 2014, on a 10-0 vote, the City Council passed a new ordinance ordering city staff to draft regulatons to ban hydraulic fracturing, or fracking, and other well-stimulation activities, but those regulations have yet to be developed. Even so, Wong and other advocates say they are less concerned with the methods used – enhanced techniques versus traditional oil extraction – as much as they are about the proximity of the sites.

In 2016 Mayor Eric Garcetti appointed Uduak-Joe Ntuk as the city’s petroleum administrator, a position the mayor’s office said had been vacant for more than 30 years. It’s considered largely an advisory position, but earlier this year, the city council demanded that Ntuk study how the city could phase out oil and gas drilling near homes, schools, hospitals, parks and other public places.

In June the city council adopted a motion to study the health impacts of oil drilling in neighborhoods. A report is expected late this year. The county is reviewing existing studies and papers to identify what is known about oil and gas exposures and impacts on health.

Wong said recent efforts to look into problems associated with drilling are encouraging but that pressure must be brought on the mayor, city council and the city planning commission to scale back and phase out drilling in the city.

“We believe that oil drilling is fundamentally incompatible with urban life.”

Sentinel Peak Resources and the L.A. Archdiocese did not respond to a request for comment by publication time. AllenCo Energy said they had no comment on L.A. drilling sites.