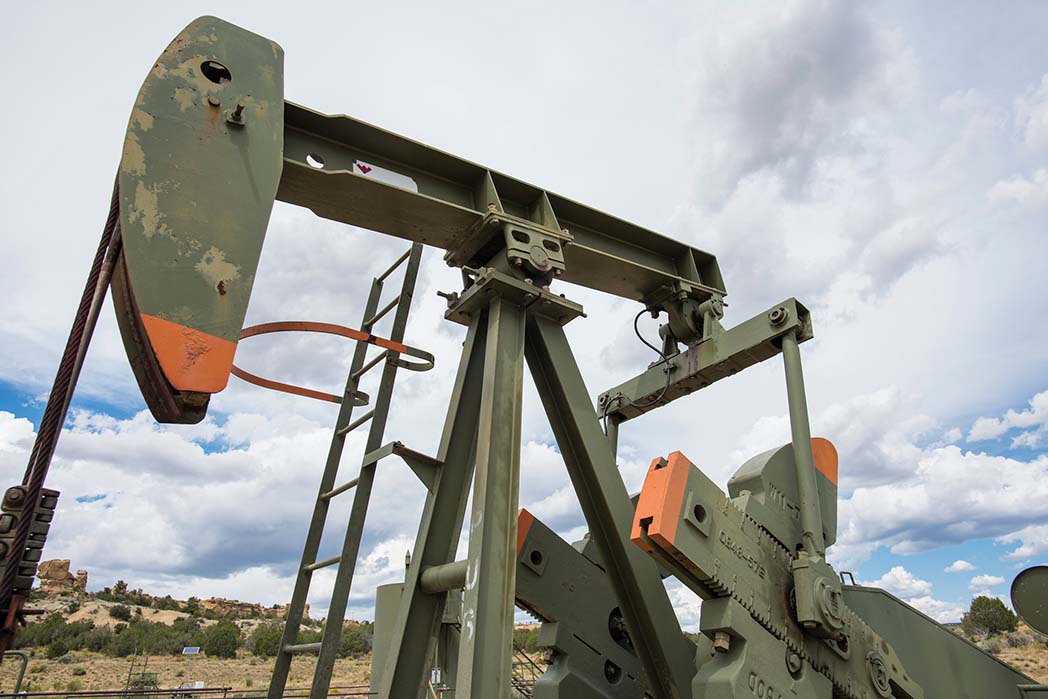 The School of Energy at New Mexico’s San Juan College opened in 2003, when fossil fuel production was humming along and oil and gas producers wanted a new, single place to train employees for work in the bountiful natural gas fields of the surrounding San Juan Basin.

A pair of operating oil and gas wells sit next to the school parking lot. Similar wells pepper the landscape for miles in all directions outside of town. A pumpjack, the apparatus resembling a grasshopper that’s commonly seen bobbing above oil wells, is parked outside the school’s front door. It was donated in 2018 by the New Mexico State Land Office commissioner at the time, who worried Democrats would desecrate it in Santa Fe.

It’s a replica of the first oil well on state land nearly a century ago. And it’s solar powered — or it’s supposed to be. The solar panel hasn’t been installed yet. And whether intended or not, that reflects the region’s bumpy transition away from fossil fuel production.

This year was one of the worst years for the climate, in New Mexico and across the planet. The Intergovernmental Panel on Climate Change and every other group that tracks climate change implored national and local governments to wind down fossil fuel production and stop further projects. Yet the San Juan College School of Energy continues developing new programs to train students for new jobs in natural gas production — both for export and for creating hydrogen fuel.

And the School of Energy hopes to do that with state grants that were established to train workers transitioning away from jobs in another, dying fossil fuel industry — coal.

In 2019, the New Mexico State Legislature passed the Energy Transition Act (ETA). Among other things, the bill created a trio of multimillion-dollar support funds in the wake of plans to shut the San Juan Basin’s two coal-fired power plants and their mines. The funds are to boost the economy and train workers as they transition to more environmentally and economically sustainable employment.

Though a legal dustup over the power plants has temporarily paused implementation of the ETA, 26 grant applications are in, covering everything from commercial food skills to movie production to hydropower storage. And San Juan College has a finger in many, including three of four renewable energy projects — and all three of the proposals that rely on rebuilding and expanding natural gas production in the San Juan Basin.

“I object to San Juan College thinking they’re entitled to that (ETA) money,” says Mike Eisenfeld, program manager with the San Juan Citizens Alliance, a regional environmental group that has worked for years to reign in the fossil fuel industry in the San Juan Basin.

“They’re not going to get it as long as I’m around,” he says.

Two of the gas-based ETA proposals involve making hydrogen fuel. Hydrogen fuel cells can generate electricity and power both cars and high-energy industrial processes; the fuel comes either from splitting water molecules — or stripping it from natural gas.

Industrial-level carbon dioxide sequestration has had little economic success despite years of tests and billions in funding.

The first is natural gas production leaks. For example, earlier this month, New Mexico’s main oil and gas regulator slapped the state’s largest gas producer, Hilcorp Energy, with a $1.6 million fine for unauthorized emissions from its wells. Earlier, Hilcorp was ranked the nation’s largest methane emitter among all oil and gas production companies according to the Clean Air Task Force.

The second issue is what to do with gobs of carbon dioxide left over from the production process. Injecting it underground to reduce the hydrogen’s greenhouse gas footprint is scientifically well understood, but industrial-level carbon dioxide sequestration has had little economic success despite years of tests and billions in funding.

And in the other gas-based ETA proposal, the college partners with Western States and Tribal Nations (WSTN), a natural gas lobbying group that wants to lay pipelines to a not-yet-built port on the Pacific Ocean to ship natural gas to Asia from Wyoming and the Four Corners region of Utah, Colorado, Arizona and New Mexico.

WSTN wants to build a curriculum at the School of Energy for Environment, Sustainability and Governance (ESG) certifications, which are used by investment banks and other groups to evaluate the environmental and social bona fides of things like natural gas production companies and pipelines.

The curriculum is part of WSTN’s larger push to get Asian economies to buy natural gas as a so-called “bridge” fuel as they dump their highly polluting, coal-based power systems. The argument is that natural gas is ready now, and renewables are still years in the future. The ESG program would turn out students who could certify “clean” gas production projects destined for Asia.

This program is being proposed at the same time that New Mexico itself is shutting its coal-fired power plants and jumping straight to renewables. Because of a provision in the ETA calling for 100% renewable energy production in the state by 2045, no new “bridge” natural gas power plants are being built.

In 2020, Alicia Corbell, dean of the School of Energy, sent a series of emails to fossil fuel companies to drum up letters of support for the school’s ESG grant application. They show her working closely with WSTN director Andrew Browning. (The Energy and Policy Institute unearthed the emails in a public records request and shared them with Capital & Main.)

The emails began: “I am reaching out to you regarding some of the efforts the School of Energy has taken to connect San Juan Basin natural gas to Asian markets.”

Browning, of Denver, is also a partner in the energy lobbying group HBW Resources, and chief operating officer of the Consumer Energy Alliance, a fossil-fuel-funded advocacy group, both of Houston.

“The School of Energy, in collaboration with Western States and Tribal Nations, is reviewing ways to position our local producers for this and other future opportunities,” Corbell wrote.

In response to questions about the emails, she says, “Open communication between the institution and employers on these issues is the mark of a highly functioning collaboration.”

“We do not develop oil and gas projects,” she says, “but rather support and listen to our community and train the workforce it tells us they need.”

Some in the community want a different workforce.

“In the face of climate change, we absolutely take offense to the idea that natural gases would be considered — in this day and age — a transition or ‘bridge’ fuel.”

Eisenfeld worries about rebuilding a natural gas industry that many hoped was finally on its way out, especially in light of the climate warnings from the Intergovernmental Panel on Climate Change and the normally staid International Energy Agency earlier this year.

He says that retraining coal workers to work in natural gas jobs “gives the community a false sense that progress is being made.”

“In the face of climate change,” he says, “we absolutely take offense to the idea that natural gases would be considered — in this day and age — a transition or ‘bridge’ fuel.”

Corbell strongly disagrees. “What gives me pause are the dire conditions that many of our students know as their reality when they come to us,” she says. “These students are able to break generational poverty and provide for their families as thriving members of the middle class.”

She says the long, difficult history of oil, gas, uranium and coal production in Indian Country leaves many unhappy at the thought of starting a new era of gas drilling.

“Everything has always been handled outside … of where the activity is happening,” she says. “That’s been a major problem since they started leasing in this area, like 100 years ago.”

The past year included the driest period in recorded history in New Mexico, and while recent rains have ended that stretch, the area around Farmington remains in an extreme drought.

Meanwhile, inside the School of Energy, students still bustle and many classes still focus on fossil fuel production, which directly fuels the increasing heat and aridity of the Southwest.

Corbell says that many of the school’s oil and gas production classes teach skills that are also applicable to renewable energy production, “ensuring that our students are flexible to meet whatever opportunities are presented.” But, she says, “The majority of our graduates choose to work in the oil and gas sector.”

“The San Juan Basin is a goldfish bowl of fossil fuels. And if you’re in the bowl, it’s hard to see other options.”

And although the state named San Juan College a Center of Excellence for Renewable Energy and Sustainability in 2019, it’s still developing that curriculum.

Don Schreiber, a rancher, lifelong local resident and longtime thorn in the side of natural gas producers, thinks that continuing to offer oil and gas classes is not doing students — or the region — any favors.

“If we continue to produce products, whatever they are, that come from the drilling and production of methane (natural gas), we’re going to continue to consign our citizens to second class economic status,” he says.

When told of classes that teach skills applicable to both renewable energy and fossil fuel production, he asks, “What possible part of being a compressor mechanic or a process technician for natural gas or oil wells has to do with renewable energy?”

He has worked around the local fossil fuel industry his whole life. For decades before he became a rancher, Schreiber sold insurance to oil and gas operators in the region. Seeing the effects of those operations on his ranch — which is dotted with gas wells — leads his drive to clean them up or shut them down.

“The San Juan Basin is a goldfish bowl of fossil fuels,” he says. “And if you’re in the bowl, it’s hard to see other options.”

When he was in high school, he took advanced classes from the nascent SJC before it had a permanent building. More recently he and his sister started a nursing scholarship for Native American students.

“We are very much boosters of the college,” Schreiber says. “And we see a huge opportunity for it to help the community and help change direction.” And that direction is sharply away from any further natural gas production.