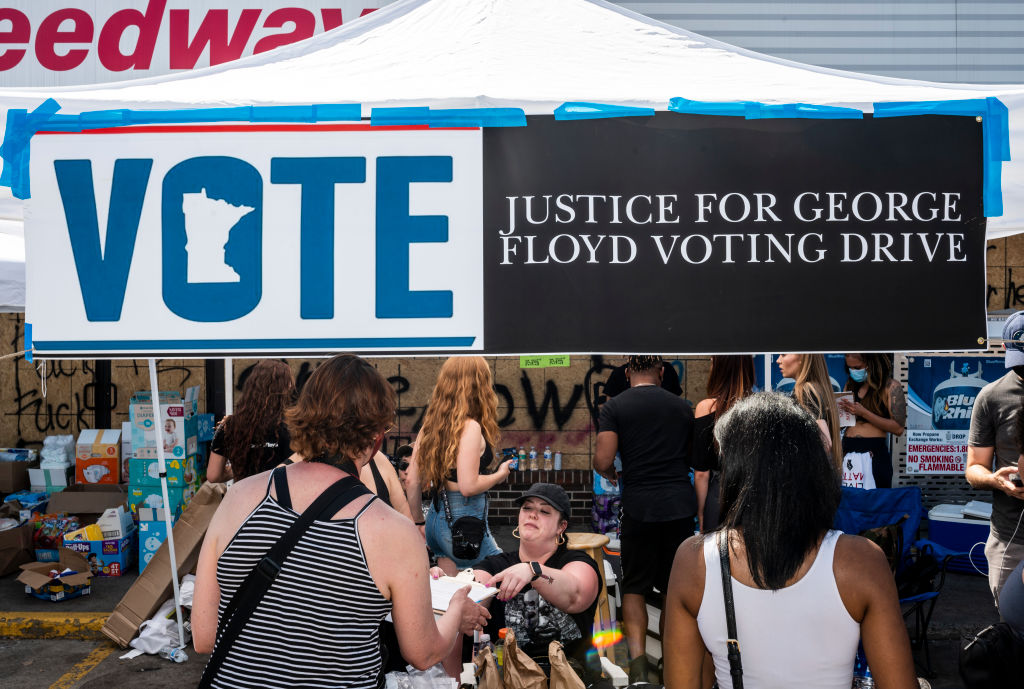 What impact could 34 million poor nonvoters make if they started participating in elections?

It seems a little risky in retrospect, but since launching three years ago, the Poor People’s Campaign has been executing its political strategy on a dearly held hunch: namely, that increasing the volume of poor and low income voters will make for more democratic elections and more equitable social policy. Putting their intuition to the test, the national advocacy group, which garnered 3 million attendees at its virtual Moral March on Washington in June, commissioned a study to learn if their best guess, which Poor People’s Campaign policy director Shailly Gupta Barnes calls more of “a motivating belief,” was even in the ballpark.

What they learned made them glad they’d followed their political instincts. According to Rev. Dr. Liz Theoharis, a co-director of the Poor People’s Campaign, the data empirically prove what the organizers themselves have long understood—“poor and low income people can become a transformative new electorate.” Especially in the South, where they’ve already made a difference in competitive gubernatorial races in Kentucky and North Carolina, unseating incumbents even in the face of extreme voter suppression.

As the national conventions of the two major U.S. political parties approach, the Democrats on August 17-20, followed by the Republicans on August 24-27, the Poor People’s Campaign has released a white paper written by Robert Paul Hartley, an economist with the Center on Poverty and Social Policy at Columbia University. Entitled Unleashing the Power of Poor and Low-Income Americans: Changing the Political Landscape, the 22-page analysis crunches numbers from the MIT Election Data and Science Lab’s 2017 reports on presidential and U.S. Senate elections and the Current Population Survey from the U.S. Census Bureau and the U.S. Bureau of Labor Statistics.

Hartley has quantified the number of eligible low income nonvoters in each state in relation to the state’s total electorate – about one out of five in Arkansas, Kentucky, Mississippi, New Mexico, Oklahoma, Tennessee and West Virginia – and has related those percentages to margins of victory to show the potential impacts on elections. He then calculated what percentage of new low income voters would have to vote the same way in order to flip the party affiliations in the 15 states where the victory margins are small enough to be affected. Poor People’s Campaign leaders say the newly revealed possibilities warrant a fresh look from party apparatchiks strategizing where best to deploy campaign resources.

“In the South, if you just take the 13 former Confederate states, that’s over 168 electoral votes,” said Rev. Dr. William J. Barber II, president of Repairers of the Breach, the second Poor People’s Campaign co-chair at Tuesday’s press conference announcing the report. “And if you change just three or four states in the South, then you fundamentally shift the political calculus.”

Some of the findings are based on speculative questions, e.g., if low income voters participated at the same rate as higher income voters, then what effects can be expected? One likely answer is that rebalancing representation between higher and lower income voters may take more than one election cycle. But other findings mark what could be the beginnings of a shift away from the widely accepted notion that poor people don’t vote. The increase in responsiveness among poor and low income voters measured in Figure One below, which correlates to the worsening of their economic circumstances, shows a renewed engagement with the electoral process.

“Over time, the data shows that eligible voters living below twice the poverty line do respond to changes in the economy and the candidates and issues,” Barber says.

“For the 2018 mid-term, the four year increase in voting percentage, around 10 percent, was about the same for higher and lower income voters,” he explained. Interpreting the data, he says, “There’s an opportunity for mobilization. They are responsive and they do move in tandem with one another.”

Candidates are taking note and are stepping up to center poor people’s issues in their electioneering. Theoharis says the Poor People’s Campaign will be sponsoring upcoming town halls tied to eight U.S. Senate races, details soon to be announced.

“The Senate is in play,” confirms Rev. Barber. “And poor folk have the power to make the play.”

He’s referring to the 34 million poor and low income people in the U.S. who, though eligible, did not vote in the 2016 election but who, if galvanized, could turn many tides in November. Hartley shows that in some states even if only a fraction of this untapped voting pool is activated, the victory margins in prior elections are easily surpassed. “In Michigan,” Hartley explains, “if only one percent of low income nonvoters moved to the polls and voted, they would in total equal the most recent margin of victory.”

“In Michigan, if only one percent of low income nonvoters moved to the polls and voted, they would in total equal the most recent margin of victory.”

In the seven states that the United States of Inequality has identified as 2020 battleground states, the percentages of low income eligible nonvoters relative to the total electorate in 2016 are considerable: 17 percent in Arizona, 11 percent in Florida, 13 percent in Michigan and North Carolina, 14 percent in Ohio, 12 percent in Pennsylvania, and 11 percent in Wisconsin. When compared to the victory margins for the races in the 2018 midterms, real political transformation starts looking achievable in a dynamic political environment.

For the 2016 presidential race, not all but some margins of victory were less than the percentage of representation in the total electorate – 13 percent in Arizona, 7 percent in Florida, 1 percent in Michigan, 19 percent in North Carolina, 35 percent in Ohio, 4 percent in Pennsylvania, and 5 percent in Wisconsin. For those who support the Poor People’s Campaign emphasis on building political power by “registering people for a movement that votes,” these findings are invigorating, notwithstanding the safety challenges for voter registration drives and ultimately get-out-the-vote efforts posed by the pandemic.

“Poverty and racism are the fissures, the wounds, through which this pandemic has power,” Barber said at the event on Tuesday.

The way Barber sees it, the fight to the ballot box is also a fight for self-survival.

“There’s an economic annihilation going on. Seven hundred people die from poverty every day in this country,” he says. “But poverty is not inevitable, it’s created by public policy. We’re tired of being ignored and so we’re going to show our power at the ballot box in November. That’s what our campaign is committed to from here until we no longer exist on this Earth.”

Barber’s pleased to have Unleashing the Power in his back pocket. He says: