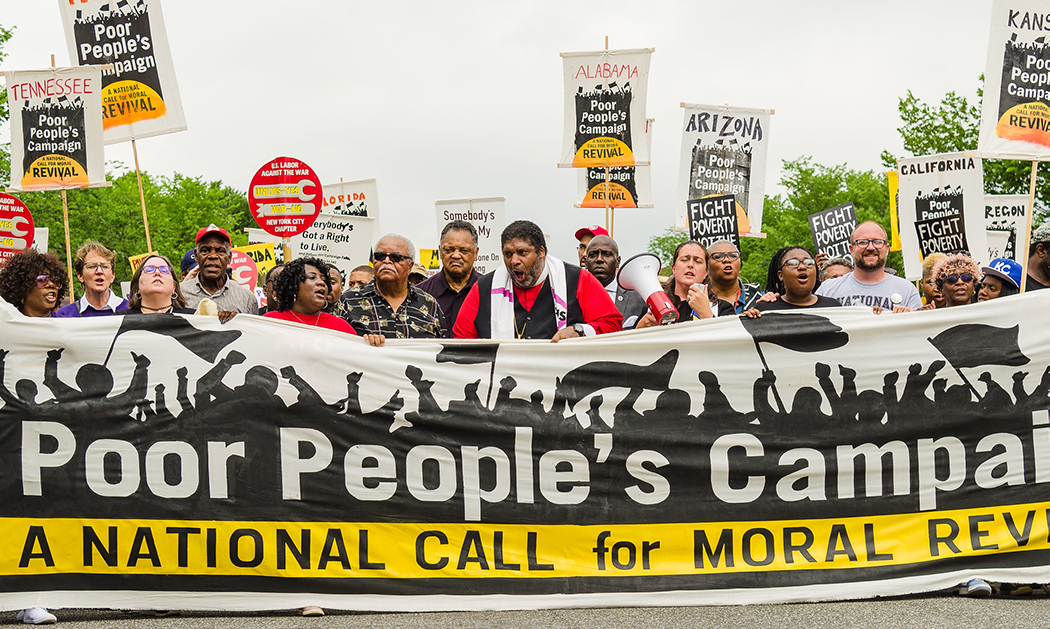 Can Poor People Make a Difference in the 2020 Election?

In the midst of a pandemic, Rev. William Barber’s June 20 March on Washington goes digital.

For the past two years, Rev. Dr. William J. Barber II and his Poor People’s Campaign have descended upon Washington, D.C., in June to hold the powerful to account.

The 2018 gathering on the National Mall preceded the midterm election that swept a Democratic majority into the House and culminated in actions and hunger strikes in 40 states. Last year, 1,000 community leaders convened for a series of events that included a presidential campaign forum.

This year, with mass unemployment, a pandemic raging through meat packing plants, nursing homes, and prisons, and the streets of major U.S. cities convulsed by protest after the brutal on-camera assault of George Floyd, an African American detained by Minneapolis police officers, the issues that Barber has spent his career championing are more urgent than ever.

The campaign – named after the one launched by Rev. Martin Luther King on the eve of his assassination and known for direct action and acts of peaceful civil disobedience – has had to turn its June 20 March on Washington into a digital gathering.  Absent the customary boots on the ground – but propelled by personal stories of pain and struggle and a backdrop of civil unrest – the movement’s ability to advance an agenda to match the scale of the nation’s challenges will be put to the test.

The Poor People's Campaign is named after an effort launched in 1968 by Rev. Martin Luther King.

The goal of the event – dubbed the Mass Poor People’s Assembly and Moral March on Washington – is ambitious: That the Republicans and Democrats, on the eve of their respective conventions, “address the interlocking injustices of systemic racism, poverty, ecological devastation, militarism, and the distorted moral narratives of religious nationalism.”

“We’re going to revive a moral agenda that says no nation is really good until it establishes justice and promotes the general welfare for everybody from the bottom up. And we’re going to register our votes because poor and low income people really hold the key to a change in the political catalyst in this country,” Barber told Capital & Main last week.

That vision is not likely to sway a Republican Party that has worked to reduce food stamp eligibility and fostered climate change denialism. But the Poor People’s Campaign: A National Call for Moral Revival – which is the campaign’s full name – sees a Democratic Party that needs a shove as well.

“We’re not partial. We’re not just dependent on one candidate. We are choosing to change the political atmosphere,” says Barber, who remains undaunted by the fact that former Vice President Joe Biden, the Democratic candidate who, at least initially, represented a return to the Obama era, prevailed over ones that pushed for more radical change.

Staff has had to cancel mass meetings, ramp up phone banks and train members to be digital organizers in the wake of the stay-at-home orders.

It’s been a shifting time for the Poor People’s Campaign as well, as the staff has had to cancel mass meetings, ramp up phone banks and train its members to be digital organizers in the wake of the stay-at-home orders, says Laurel Ashton, organizing director for the Poor People’s Campaign. Around the country, organizing “has not slowed down,” she added, pointing to rent strikes and job and health care actions, from Los Angeles to Pennsylvania. “Honestly, it feels like the organizing is accelerating out of pure necessity.”

And that ramp-up in activism predates the mass protests prompted by Floyd’s death in police custody. Since then Barber has been taking pains to link Floyd’s death and the conflicts in the streets to larger systemic problems. “This racism is not just a spectacle of every now and again,” Barber told MSNBC’s Lawrence O’Donnell on Friday night, as Atlanta, New York and other cities erupted in civil unrest. “It’s killing us and it’s killing the soul of this country.”

He reminded readers of The Guardian on Saturday of the long list of racial disparities that have made it so dangerous to be black in America, while appealing to those on the receiving end of discrimination to act as “wounded healers.”

Barber has criticized Congress for failing to do more to protect essential and unemployed workers and promote a plan for a safe and equitable reopening. The campaign is calling for “resistance to the reopening of states” until standards are in place to protect low income people and communities of color. The failure of Congress to protect workers now deemed essential is “wrong,” said Barber. “That’s why we’re saying, ‘Stay in place, stay alive and organize.’”

The campaign is calling for “resistance to the reopening of states” until standards are in place to protect low income people and communities of color.

Activists with the Poor People’s Campaign barraged House Speaker Nancy Pelosi and Senate Majority Leader Mitch McConnell with phone calls last month urging them to take into account the needs of poor people in the next stimulus bill.

With a president in office who sows racial division, Barber has sought to build a multiracial movement of poor and working class people, with more than 40 outposts around the country.  He’s organized white Appalachian coal miners along with African-Americans from the Mississippi Delta. The campaign, says Ashton, is about “registering people for a movement that votes,” and also about putting poor people at “the center of the political narrative,” where they have thus far been absent.

That includes people like Claire Chadwick, a retail worker from Kansas, who Barber joined on a Zoom call in mid-May as she described her battle with COVID-19 and “an always anxious energy” from her store’s managers who let customers crowd the aisles unchecked, prompting her and her co-workers to stage a walkout.

And Mindy Bergerson-Lawrence, a McDonald’s worker from Maine, who, on that same call, lamented the corporation’s failure to adequately protect its workforce, 90 percent of whom are employed by franchisees. “We just got a shipment the other day at our store of pins, lovely little pins, that say ‘I am essential.’ That’s what we got.” Prior to the pandemic, 78 percent of McDonald’s workers did not believe they had access to paid sick leave, according to a report released in March.

“So you got a pin that said you were essential, but you’re still in a nation that doesn’t have guaranteed paid sick leaves,” echoed Barber, whose deep baritone voice was recognizable even though he had only an audio presence on the call.

Last month, McDonald’s workers in 20 cities struck in protest against the company’s failure to provide adequate paid sick leave and hazard pay during the pandemic. Company officials told The Huffington Post that they were “confident” that the “vast majority” of its franchisees were providing paid sick leave to employees.

“We have three deals pass and 83% to 85% of all the money goes to the top, the wealthy, the corporate heads. Not to the workers.”

That vision of economic transformation through multiracial movement-building bears a strong resemblance to that of Sen. Bernie Sanders. But the Poor People’s Campaign – as its name would suggest – focuses more explicitly on the poor than Sanders did. And its work is not tied to a particular election cycle. “Long-term transformative, deeply committed organizing is necessary every day of every year,” says Ashton, who adds that campaign tactics are, nonetheless, “informed by where we’re at in the election cycle.”

While Barber reserves his fiercest criticism for Trump and the Republican-controlled Senate, he would like to see a Democratic Congress with more fight in it. The bipartisan stimulus bills have, thus far, been a disappointment as far as he is concerned. “We have three deals pass and 83% to 85% of all the money goes to the top, the wealthy, the corporate heads. Not to the worker, not to poor low wealth workers, not to the people that we changed the title of, from ‘service workers’ to ‘essential workers,’” Barber said.

Missing from those bills are essential protection, including universal health care, guaranteed sick leave, adequate unemployment benefits, and a basic income, and Barber also points to what he calls “attention violence,” a refusal “to pay attention to those that are poor or low income.” What his movement is attempting to provide is that laser focus.

“We question an analysis of this country that simply says that if Wall Street is OK then backstreets and side streets and alleys and dirt roads are OK. That is not true, [n]or [was it] even before COVID,” Barber said.