A week after Los Angeles Unified’s new schools chief, Austin Beutner, touted the district’s latest robocall campaign to increase attendance during his opening day back-to-school tour, the LAUSD school board had some bad news for the families in Board District 5: Their board member, who represents roughly 99,000 students, will be marked absent for the rest of the school year.

That’s partly because the earliest that a winner of a March 5, 2019 special election can be certified will be mid-June if the race goes to a May 14 runoff— a full 11 months after convicted money launderer Ref Rodriguez vacated the seat.

With her offer to serve as an interim LAUSD appointee (with a pledge to not run in the election) spurned, Jackie Goldberg may now toss her hat into the ring.

Mostly it’s because Rodriguez’s former pro-charter voting block turned back a motion on Tuesday to appoint Jackie Goldberg to her old District 5 seat. The 73-year-old former Compton teacher — already twice elected to the board by District 5 voters — had offered to serve as an interim appointee with a pledge to not run in the March election. Now, however, the spurned Goldberg says she will consider formally tossing her hat into the ring. 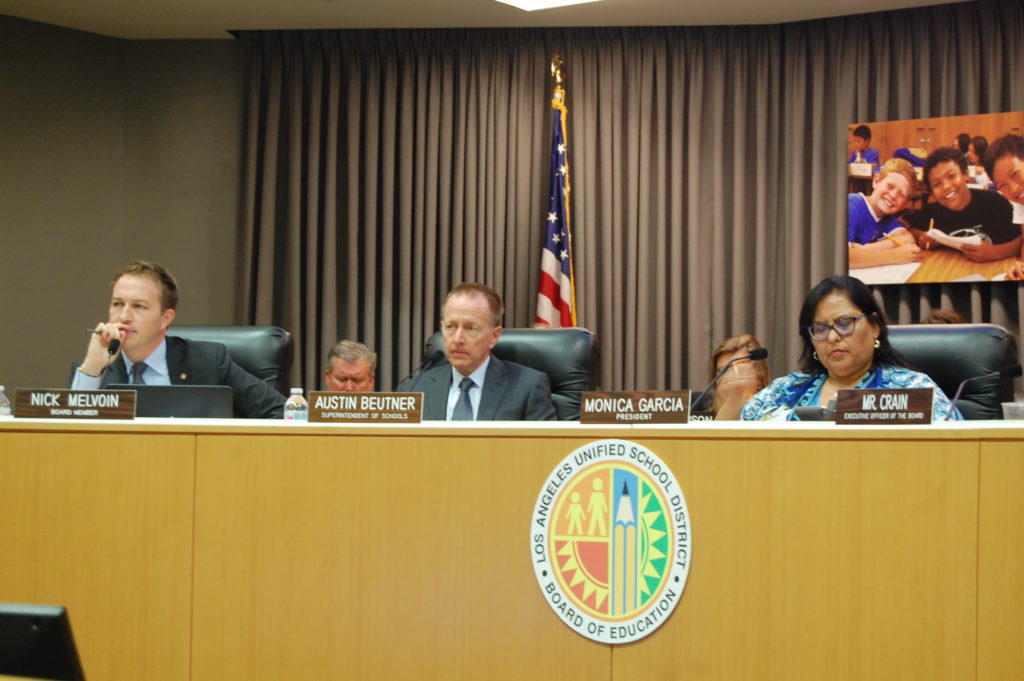 Instead, Rodriguez’s chief of staff Aixle Aman, whose own resume is rife with corporate reform alarm bells like Teach for America and Democrats for Education Reform, will fill in during the interregnum, albeit without a say in school board business. “The office of District 5 continues to provide service every day, taking calls and addressing needs and communicating throughout the organization,” board president Monica Garcia told Tuesday’s audience.

While we’re at it, say goodbye to PUC International Preparatory Academy charter school in L.A.’s Eagle Rock neighborhood. According to a Wednesday announcement on its website, the PUC board of trustees pulled the plug on the dual immersion elementary school because its 114-student enrollment “fell far short of what was needed to be financially sustainable.”

The 15-charter PUC network is better known as the Ref Rodriguez-co-founded chain that was at the center of additional allegations last year of possible self-dealing shortly after his money laundering indictment. PUC checks totaling $285,000 in public funds had been paid out by the disgraced school board member to businesses with which he had personal ties. The conflict of interest has drawn attention by the U.S. attorney’s office.

Leave it to intrepid education reporter Thomas Ultican to spread the alarm over a July 31 story by Chalkbeat that Netflix CEO and school privatization hobbyist Reed Hastings and the anti-labor, retired hedge fund manager John Arnold have kicked in to launch a $200 million something called The City Fund. Its mission? Push financially squeezed urban districts to put district schools under the control of private nonprofit foundations, while promoting charter school growth through mechanisms like common enrollment systems. One of its first targets for $10 million of charter expansion is Oakland, according to a Gates Foundation grant spotted by Leonie Haimson ‏of Class Size Matters.