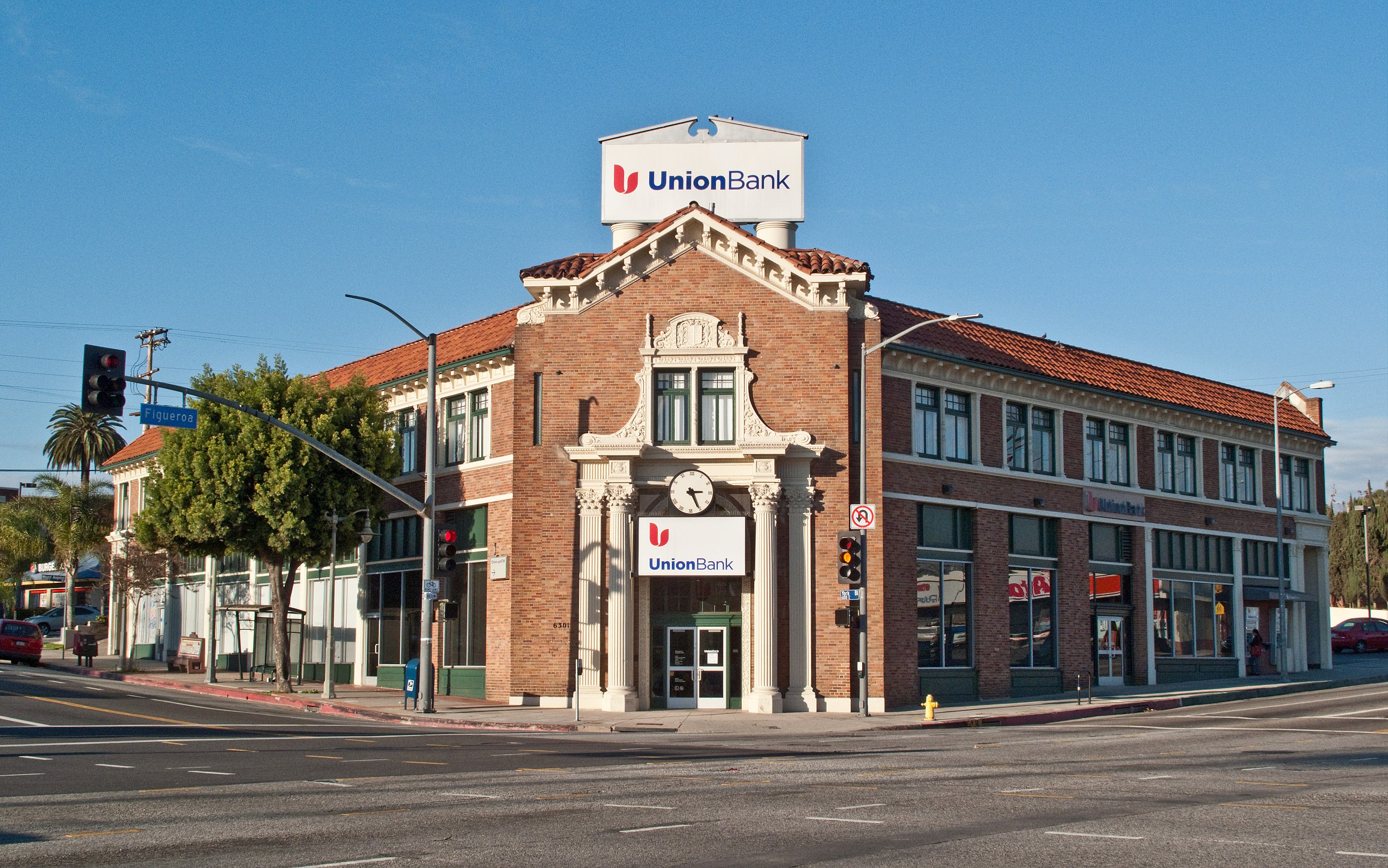 At a time when big banks get easy approval for profitable mergers, some California community groups are saying not so fast. Dozens of them are seeking to block U.S. Bank’s bid to acquire Union Bank unless the former sets aside $90 billion for lending and charitable giving to the state’s lower income areas and communities of color.

The $8 billion merger, announced Sept. 21, 2021, would create California’s fifth largest bank, a $680 billion mega-corporation that would compete with giants like Bank of America and JPMorgan Chase. How the Biden administration responds to the merger will be a test of whether the administration intends to scrutinize bank consolidation rather than rubber stamp it.

The $8 billion merger would create California’s fifth largest bank, a $680 billion mega-corporation that would compete with giants like Bank of America and JPMorgan Chase.

The merger would be a win for bank executives, but Paulina Gonzalez-Brito, the executive director of the Oakland-based California Reinvestment Coalition, comprised of local housing advocates and nonprofit development groups, is leading the opposition to the acquisition. According to Gonzalez-Brito, low income communities have a lot to lose in the deal.

Until now, U.S. Bank and Union Bank have each provided financing for affordable housing. Each makes home and small business loans, donates to local charities and community lenders.

“Now, the danger is one is going to disappear. You end up with less than what you started with and communities get less,” Gonzalez-Brito noted.

Much of the $90 billion package the CRC has proposed would go toward one of the state’s greatest needs: housing. The California Housing Partnership reports that 1.2 million low income renters lack safe and affordable housing.

The California Reinvestment Coalition is calling for public hearings on the merger to be held in Los Angeles, Fresno and San Francisco. Among CRC’s proposals: special programs to boost African American homeownership and Native American small business. As well they are asking for smaller scale opportunities for tenants like Maria Montes de Oca to own and manage their own buildings.

In Oakland, just before Christmas 2021, Montes de Oca and a handful of neighbors were celebrating. Her landlord, whom she said had doubled the rent in the past two years while refusing to eradicate mold or fix backed-up plumbing, had tentatively agreed to sell her building to the Oakland Community Land Trust.

“Now I can relax,” Montes de Oca said, because after a two-year rent strike, the land trust promises to keep the building affordable, and make repairs — that is, if the deal goes through.

U.S. Bank contends that its acquisition of Union Bank is in itself a benefit to communities where it operates, and promises to provide affordable and increased financial access.

CRC argues the $90 billion benefits package would ensure that low and moderate income communities of color get financing opportunities for housing and small businesses and mitigate the potential harm of a consolidation.

But such agreements aren’t legally binding and enforcement can be challenging. “It’s a generally hard thing to do,” said Mike Calhoun, president of the Washington, D.C.-based Center for Responsible Lending. “They’ll say they’ll make X dollars worth of loans. It’s often blurred as to whether it’s above and beyond what they’ve been doing. How do you count which loans are eligible?”

In New York, Kathryn Franco, chair of the Buffalo Niagara Reinvestment Coalition, said that in order to help enforce agreements, her group tries to make sure the public is part of the process by “being really transparent with the information we have, [and] letting it be known to community members.”

U.S. Bank, for its part, contends that its acquisition of Union Bank is in itself a benefit to communities where it operates, and promises in its October 2021 merger application to provide affordable and increased financial access, to “address systemic racism” and support “sustainable environmental practices.” Also noted in the merger application is that both banks passed their most recent Community Reinvestment Act exams with a rating of “Outstanding.”

Under the Community Reinvestment Act, which aims to eliminate loan discrimination by banks, regulators periodically examine each bank’s lending and community investment record, issuing scores ranging from unsatisfactory to outstanding. But grade inflation is rampant, Gonzalez-Brito said, with 96% of banks passing their exams.

In 2019, Sen. Elizabeth Warren forced Federal Reserve Chair Jerome Powell to admit publicly that since 2006, the Fed had approved 3,813 mergers and denied zero.

Banks often accept community benefit agreements in order to wipe out opposition and grease the skids for mergers to proceed. CRC has secured 12 such deals by calling for regulators to deny bank mergers and acquisitions based on poor community reinvestment performance. But a $90 billion U.S. Bank commitment would be the largest in California to date.

Still, the whole process from merger announcement to concessions made to community groups to eventual consolidation, has been more akin to Kabuki theater than transparent regulatory review, because bank mergers — at least for the past 15 years — have been virtually guaranteed approval.

In 2019, Sen. Elizabeth Warren (D-Mass.) removed all doubt by forcing Federal Reserve Chair Jerome Powell to admit publicly that since 2006, the Fed had approved 3,813 mergers and denied zero.

But that may be changing. After President Biden issued his executive order last July, both the DOJ and the FDIC have signaled they’ll review their rules for merger approvals more carefully.

California Congresswoman Maxine Waters (D-Los Angeles), who chairs the House Financial Services Committee, has called for regulators to put the brakes on the U.S. Bank-Union Bank deal and other pending mergers that would create banks with more than $100 billion in assets until federal agencies draft new regulations.

In 2020, U.S. Bank denied just 24% of loan applications from white areas, compared to 30% of applicants from majority African American neighborhoods.

In its opposition to the merger, the CRC has called attention to U.S. Bank branch closings in lower income neighborhoods and communities of color. The group cited a National Community Reinvestment Coalition study that showed U.S. Bank closed a quarter of its 643 California branches between 2017 and 2020. CRC fears the consolidation would bring additional closures, resulting in more people turning to high-cost check cashing and payday loans.

In 2020, U.S. Bank denied just 24% of loan applications from white areas, compared to 30% of applicants from majority African American neighborhoods and nearly 38% from majority Latino communities.

The data, derived from bank disclosures to federal regulators, also show that in 2020, about 38% of Californians lived in majority white communities, with roughly the same percentage in majority Latino neighborhoods. But 56% of the bank’s loan applicants were white and just 16.1% were Latino.

U.S. Bank spokesman Jeff Shelman argued in an email to Capital & Main that the bank’s “loan underwriting and approval processes have been carefully designed with fair lending requirements in mind.” He pointed to $37 million in charitable giving and $1.3 billion in community development investments, like a recently built 98 unit building in San Bernardino County or a motel-to-affordable-housing conversion in Anaheim. Shelman didn’t say the bank wouldn’t close branches, but he said, “We will not leave any communities that Union Bank is currently serving and we have committed to keeping all front-line branch employees.”

But CRC is insisting the banks put their commitments in writing. Gonzalez-Brito said U.S. Bank officials have held at least two “listening sessions” with her group, but so far no actual negotiations.

“I’m surprised at how slow they’re moving,” she said, adding that the community groups she works with are getting nervous.

Now, with more critical reviews of mergers on the horizon, groups like CRC and New York state’s Buffalo Niagara Reinvestment Coalition may have greater leverage, and banks may be prepared to spend more on communities in order to consolidate.

“I’m hoping there is going to be real change in the way banks approach mergers,” said the Buffalo coalition’s Kathryn Franco.