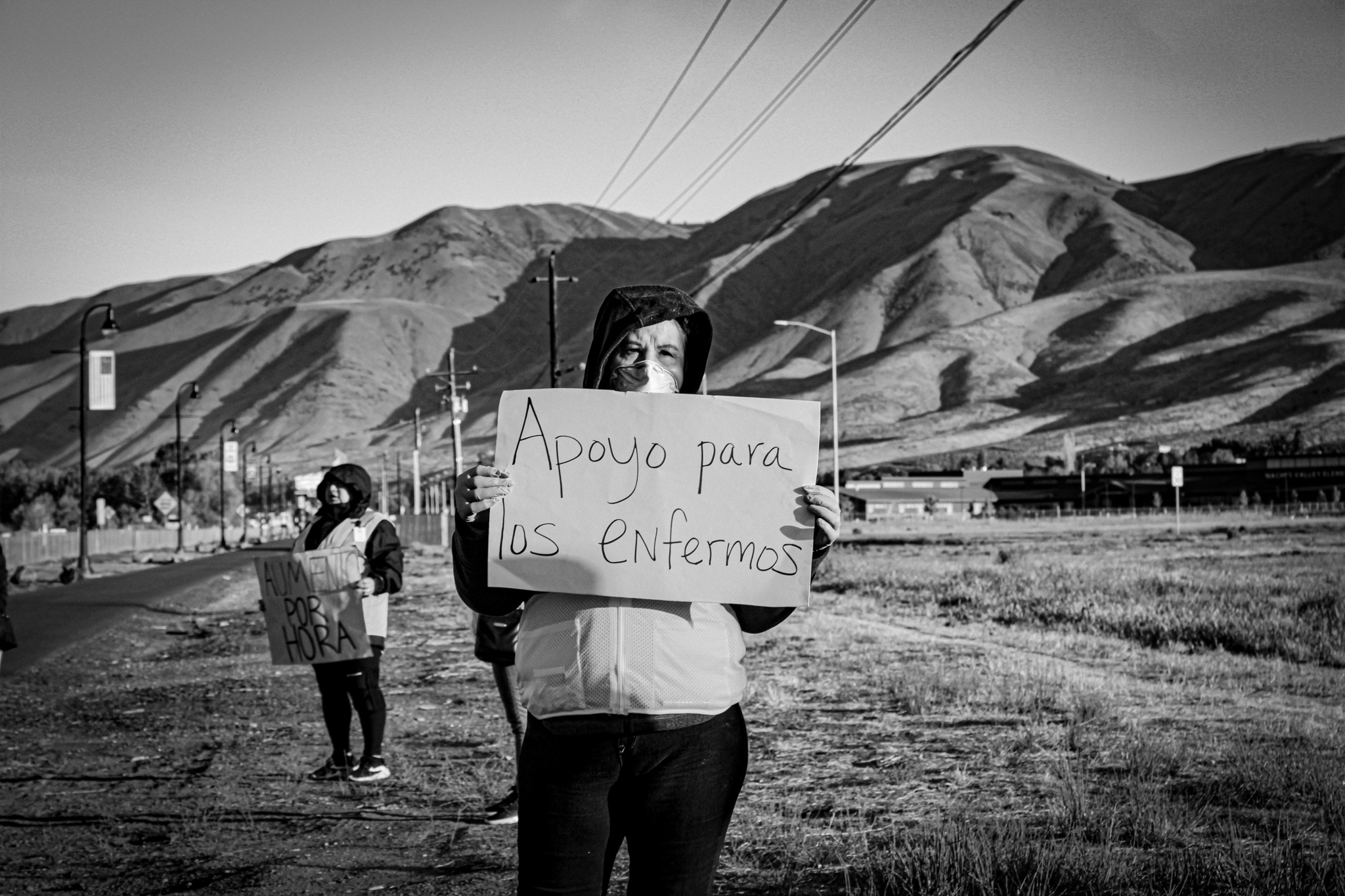 This week the COVID-related strike in Washington state’s Yakima Valley quadrupled in size, as workers walked out at three more apple packinghouses. More than a hundred stopped work on May 7 at Allan Brothers Fruit, a large apple growing, packing and shipping company in Naches, in Central Washington. On May 12 they were joined by 200 more workers, who walked off the job at the Jack Frost Fruit Co. in Yakima, and at the Matson Fruit Co. in Selah. The next day another 100 workers walked out at the Monson Fruit packing shed, also in Selah.

At the center of the stoppages are two main demands for those who decide to continue working during the pandemic: safer working conditions and an extra $2 an hour in hazard pay.

Apple sheds line the industrial streets of Yakima Valley’s small towns. Inside these huge concrete buildings, hundreds of people labor shoulder-to-shoulder, sorting and packing fruit.  If someone gets sick, it can potentially spread through the workers on the lines, and from them into the surrounding towns.  Although packinghouse laborers are almost entirely immigrants from Mexico, their families comprise the stable heart of these areas. Most have lived here for years. Jobs in the sheds are a step up from the fields, with year-round work at 40 hours per week.

This part of agribusiness is by far Central Washington’s largest employer, and the industry has successfully fought off unions for many years. The virus may change that, however, if the strike wave becomes the spark for creating a permanent organization among these workers. It is undoubtedly what the companies fear when they see workers stop the lines, and even more so, when they see farmworker union organizers helping to sustain the walkouts.

“The most important demand for us is that we have a healthy workplace and protection from the virus,” said Agustin Lopez, one of the strike leaders at Allan Brothers. “Fourteen people have left work over the last month because they have the COVID-19. So far as we know, the company isn’t paying them. We need protections at work, like adequate masks, and we want tests. How do we even know if any of us have been infected if there are no tests?” (Allan Brothers Fruit did not respond to phone and email requests for comment for this story.)

He charges that Allan Brothers didn’t disinfect the plant and stop production when the workers got sick. One worker, Jennifer Garton, told the Yakima Herald, “They are not doing what they’re saying they’re doing,” and that workers only heard about the cases of COVID-19 in the plant through their own conversations.

According to Lopez, at the end of April the workers sent an email to company managers, asking for better conditions, extra pay, and the right to take off work. “People were taking their vacations or sick leave or anything they could to stay home. The company said that if we had worked for five weeks we could stay home, but they wouldn’t pay us. We’re only making minimum wage, so how could we do that? And we have no guarantee we would even have our jobs back if we don’t come in to work now.”

In response to the demands, he says the company offered to buy the workers lunch. Over a hundred workers rejected that and struck the company.

The shed of another Yakima packer, Roche Fruit Company, did stop work in April to disinfect the plant, after two workers had become infected. Roche employees then also demanded hazard pay in a message to managers. When the company offered an additional $200 per month, the laborers stopped work after lunch on May 11. After an hour of bargaining, the company offered them $100 per week instead, and they went back to work. Operations manager Alfonso Pineda said the company had already planned to give workers “gratitude pay” for working in difficult circumstances.

“At the heart of the dissatisfaction of all these workers is the fact they are essential workers, but their pay does not reflect that,” says Edgar Franks, the political director of the new union for Washington farm workers, Familias Unidas por la Justicia. He explains that workers from both Roche and Allan Brothers got in touch with them when they were getting ready to strike. “The walkouts then started after management refused to raise their wages. At Roche, when union organizers and leadership arrived, management quickly relented. This is the power of the presence of the union.”

But fear is driving the strikes, even more than wages. After walking out of the packing plant, workers at Jack Frost stood in a big circle six feet apart while Claudia, a striker, explained that they were fighting for the health of their whole community. “We want everyone to have a health examination, including our children and other people possibly affected,” she declared.  “We want it for our whole family, because we know the virus doesn’t just stay in the plant. It’s outside too.”

At the rally in front of the Allan Brothers packinghouse, another woman said the same thing: that the biggest question was whether they could work without getting sick. “We have people who have been affected in this shed,” she told Yakima city councilwoman Dulce Gutierrez. “We want the company to guarantee that there are no more people who have the virus here at work, so that we can protect ourselves and our families.”

The working conditions themselves are responsible for much of the danger, and Franks says the companies have not been responsive. “Ever since the governor’s order [mandating physical distancing and safe conditions], a lot of the safety measures haven’t reached the workers inside.  The workers are elbow-to-elbow on the line, packing the fruit going through there.  Workers got sick, and they’re concerned that no one is looking after them or the wellbeing of their family and friends still inside.”

Agustin Lopez has lived in the Yakima Valley and worked in its sheds since 1985. His experience has made him cautious, therefore, about predicting whether workers will decide if a permanent union is the answer to their problems. But when he looks at the waves of people leaving the apple sheds, each company encouraging the next one, he thinks change is not just possible, but happening around him. “This connection between us is something new,” he says, “and there are people out here from lots of the plants. Maybe we are actually a federation.” The answer will be determined by the strike, he believes. “If the companies are willing to negotiate, we’ll listen to what they have to say. And if not, then we will continue with our strike.”

Related Topics:coronavirusfarmworkersFeaturedH-2A Visas
Up Next