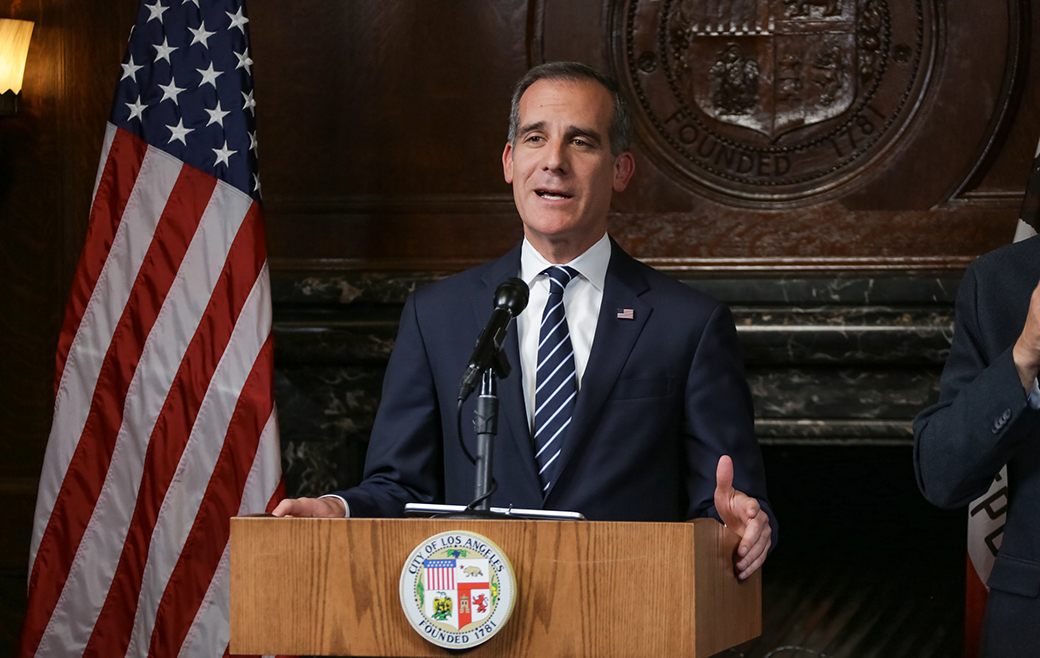 In mid-April, as it became clear that the federal economic response to the COVID-19 pandemic would exclude whole categories of immigrants and their families, localities began looking for their own ways to help this group of residents.

Along with New York and Chicago, Los Angeles is one of several large American cities that has a Mayor’s Fund – a collaborative effort between a city, philanthropic organizations and wealthy individuals that allows local government to quickly channel money toward specific needs and projects. In the recent past, L.A.’s fund has been used to keep parks in low-income neighborhoods open late into the evening through its Summer Night Lights program.

Now, hundreds of thousands of Angelenos have lost their jobs because of stay-in-place orders, and many of their families are in deep financial holes. Many of these families include undocumented or non-green card residents, and the CARES Act that Congress passed to salvage the economy deliberately excluded these families, including U.S. citizen children, from receiving stimulus checks and other federal assistance. The Mayor’s Fund raised millions of dollars to close this aid gap.

The Angeleno Card is a free prepaid debit card for poor residents who have lost at least half their income due to the COVID-19 crisis.

Initially the fund had a goal of distributing $10 million. To date, it has raised roughly $20 million, and fundraising efforts are ongoing.

The result, produced at speed and largely bypassing the bureaucratic processes that slow the rollout of big city initiatives, was the Angeleno Card, an EBT (electronic benefit transfer) card with $700, $1,100 or $1,500 in cash assistance loaded onto it, depending on the size of the family in need, that poor residents could apply for if they could prove, through evidence of job loss and so on, that their hardship was related to the COVID-19 crisis.

Within days of the program’s announcement, hundreds of thousands of applications were received, the need far outstripping the capacity of the fund to meet it. But, thousands of families, who could prove that their income was at or below the poverty line in mid-March, and who could show that they had lost at least half of their income following the implementation of stay-in-place orders, did receive vital assistance. Distribution of the cards started within days of an application process that closed in mid-April, and Mayor Eric Garcetti announced that, if more private funds could be raised, the fund would distribute assistance to additional families.

“About 12 percent of Los Angeles County’s employed workforce prior to the crisis was undocumented.”

Advocates recognize that the card, by itself, is only a Band-Aid for a gaping economic wound, but they hope that it will serve as a model for other, larger efforts. As a harbinger of what could come, at a state level Governor Gavin Newsom has also unveiled a $125 million public-private partnership to get funds to impoverished undocumented and mixed-status families. In April, San Francisco established its own UndocuFund, and a number of labor councils and other groups in the Bay Area and beyond have also now set up mutual assistance relief funds.

Manuel Pastor, director of the University of Southern California’s Center for the Study of Immigrant Integration, and a board member of the Mayor’s Fund, argues that this policy development is “highly significant,” setting both Los Angeles and California on a different response trajectory to the COVID-19 economic crisis than that of the federal government. Capital & Main recently talked with Pastor about the Angeleno Card. (Disclosure: Pastor sits on this website’s board of directors.)

Capital & Main: Why is the announcement of the Mayor’s Fund’s Angeleno Card initiative important?

Manuel Pastor: About 12 percent of Los Angeles County’s employed workforce prior to the crisis was undocumented. Eighteen percent of the county is either undocumented or living with an undocumented family member. The city of Los Angeles alone has about 400,000 undocumented residents. That’s a huge portion of the population that is systematically left out of unemployment insurance and federal relief checks, which won’t go to somebody who filed taxes with an Individual Taxpayer Identification Number (ITIN) instead of a Social Security number, or has a member of their household who filed with an ITIN. There are 200,000 children in L.A. County who live in mixed status households. The Angeleno Card tries to get dollar assistance to these families.

“When you run a pilot program at a local level, you’re trying to demonstrate what is possible.”

Was the card designed only for undocumented residents?

It’s important to realize this funding isn’t just for undocumented folks – but it is open to them. It’s also for the recently incarcerated, who don’t have unemployment insurance to fall back on; people who didn’t file taxes electronically and will have to wait months for stimulus checks; and the “unbanked”; and people with marginal employment and gig employment.

This obviously has implications for how aid programs are crafted in other jurisdictions as well. Let’s talk about that.

Most of the undocumented residents are frozen out of [federal] relief. Many are in portions of the economy that have faced severe contraction – such as restaurants. Two hundred and fifty thousand of the city’s 400,000 undocumented residents were in the workforce – and like every group, about 25 percent have lost jobs. That gives a benchmark to the lost income. The program triggered a sense of what’s possible. There’s now a $125 million fund from the state of California. When you run a pilot program at a local level, you’re trying to demonstrate what is possible.