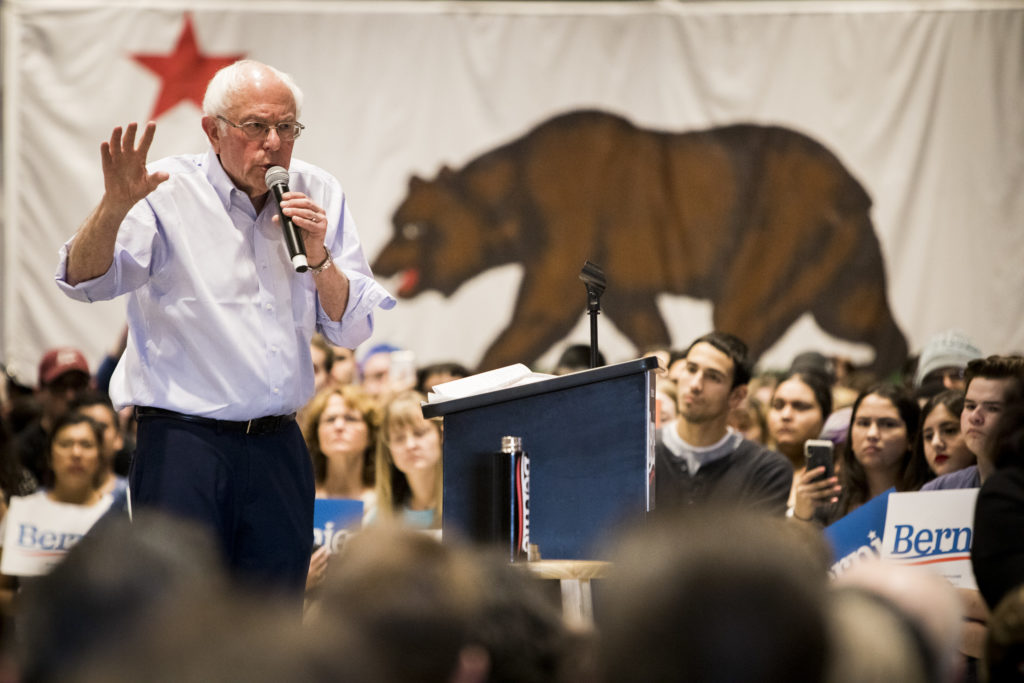 Bernie Sanders and the Art of the New Deal

It was five days before Christmas and white-haired men in baseball caps and flannel shirts stood shoulder to shoulder with nose-ringed college students, awaiting the arrival of Bernie Sanders. A kind of controlled delirium vibrated throughout this chandeliered banquet hall that was normally reserved for weddings and quinceañeras. Most had come not to size up Sanders’ arguments but to hail their improbable hero, a 78-year-old Jewish New England socialist who was drawing closer to capturing California’s primary and, possibly, the Democratic nomination – all to the shock and horror of his party’s establishment.

So unusual was the appearance of a presidential hopeful in Moreno Valley, a crime-plagued flyover town in flyover country, that 67-year-old Linda Moore, a diehard Donald Trump supporter, said she showed up purely out of civic pride. California’s Inland Empire – the sprawling desert flatlands where Moreno Valley is located – is about the size of Connecticut. The region’s burgeoning warehouse industry – it’s home to at least 14 massive Amazon “fulfillment centers” – has brought plentiful jobs, but also poverty wages, poor working conditions and air quality that is among the worst in the nation. “It was about time,” a union spokesman would say after Sanders’ speech, “that a candidate paid attention to this region, which is the shopping basket of America.” The shopping basket of America. The line has a catchy but vaguely ominous ring to it. It’s not that America comes to Riverside County to shop; instead, the Moreno Valleys, Fontanas and Bloomingtons are the places from which items on Americans’ ecommerce shopping lists are increasingly dispatched – by workers with little hope for a better tomorrow.

Tiffany Miguel, a 25-year-old supermarket employee who was waiting for Sanders in the banquet hall, said she and others her age want “the ability to buy a house, look forward to our future — not pay so much to live.” Instead, her friend Aaron Reynolds said, many of them “are risking their lives for slightly above fast food wages. People get crushed, people get gored by forklifts.”

Later, with Sanders’ arrival, hundreds of people raised their cellphones in unison to capture the candidate as he rose to the podium with a giant California Bear Flag behind him. The crowd cheered and erupted in chants throughout his 45-minute stump speech, but Sanders got the biggest applause when he said he dreamed of leading the world to redirect the $1.8 trillion that nations collectively spend on weapons to combat climate change. Pledges to legalize marijuana by executive order on his first day in office and to appoint only pro-choice judges to the Supreme Court also drew especially loud bursts of applause.

Sanders is betting that a majority of Americans feel equally enthusiastic about top-to-bottom change and are willing not just to vote for it, but to demand their legislators support it.

“What is important for Bernie Sanders is Bernie Sanders and not what is best for the Democratic Party,” a Democratic political consultant told Capital & Main a month after the Moreno Valley rally. The operative, who spoke on condition of anonymity, added that the American people want “transactional,” not “aspirational” politics. He predicted victory for Donald Trump if Sanders tops the 2020 ticket, not to mention doom for down-ballot Democratic candidates. As the party standard bearer, Sanders would mean losses for Democrats in state legislatures, he said – at a crucial moment when they must redraw congressional district boundaries based on the 2020 census. As the Democratic candidates gird for 2020’s early electoral battles, beginning with this week’s Iowa caucuses, followed by New Hampshire’s primary (February 11) and the Nevada caucuses (February 22), Sanders is enjoying a dramatic surge in opinion polls, laying to rest talk that he is yesterday’s progressive frontrunner. (He is the top choice of California Democrats in the latest Los Angeles Times poll.)

But it is Sanders’ perceived unelectability in November that causes the Democratic Party’s old guard to wake up with night sweats. When they picture Sanders running against President Trump they see George McGovern, with his call for a guaranteed minimum income, buried beneath the Nixon landslide; or Michael Dukakis posing in an Abrams tank before getting creamed by George H.W. Bush.

Sanders proposes to raise the national hourly minimum wage to $15, to make joining unions easier and to close gender pay gaps. He pledges to make public colleges and universities tuition-free and health care universally accessible through Medicare for All. He also promises to fix “a broken and racist criminal justice system” that disproportionately incarcerates people of color — partly by investing in education and jobs, and by ending the government’s use of private prisons and jails.

Yet Sanders’ agenda simply “doesn’t sound real to a lot of Americans,” explained Jaime Regalado, professor emeritus of political science at California State University Los Angeles. “But a lot of younger Americans feel it could well happen, and he’s the only one speaking that language to them.”

The Vermont senator’s campaign promises — on health care, the Green New Deal, all that legal weed – have brought moderate Democrats’ simmering resentments to a boil, as witnessed by Hillary Clinton’s “Nobody likes him” remark. And in early December Sanders got a decidedly cool reception from the editorial board of the New York Times, a bulwark of consensus liberalism. The meeting and the newspaper’s endorsement deliberations were later televised on the paper’s FX network and Hulu documentary series, The Weekly.

“You’re saying, how do I negotiate with Mitch McConnell?” Sanders began after being asked how he’d get his program through the Senate. “And I tell you how I negotiate. Because when the people of Kentucky are demanding to raise the minimum wage to $15 an hour or health care for all or making their schools, public colleges and universities tuition-free, that’s the basis of negotiation.”

Sanders seemed to sense a disconnect during the meeting. “We do live in different worlds,” he told the editorial board after declaring that he would not only be the commander-in-chief, but also the “organizer-in-chief.” The newspaper decided on a dual endorsement of senators Elizabeth Warren and Amy Klobuchar.

Abdul El-Sayed, a physician and former Michigan gubernatorial candidate who campaigns for Sanders, knew why the opinion writers didn’t buy Sanders’ message. “They look at that with a bent eyebrow and say, ‘I don’t understand how that works,’ said El-Sayed. “Because they don’t understand.”

Sanders has said his organizer-in-chief idea works and that he proved it as the mayor of Burlington, Vermont, after he won a 1981 election by 10 votes. “It was as if Trotsky had been elected mayor of Burlington,” Sanders’ friend Richard Sugarman, a University of Vermont religion professor, told producers of a local public television documentary.

The vinegary conservatives on the town’s Board of Aldermen tried to freeze Sanders out – even denying him the money to hire a secretary. In response, Sanders brought his constituents to city hall to make their demands heard. Two years later in a record-turnout election, the Sanders coalition ousted some of his opponents on the town council and eventually racked up impressive enough accomplishments, including bringing minor league baseball to town and restoring the city’s waterfront, that US News and World Report named Sanders one of the nation’s best mayors in 1987.

To be sure, Sanders’ view of governing by mobilization has been largely untested. The sweeping reforms of FDR’s New Deal came in response to a mass movement, not in coordination with them. And it may be a leap to dream of scaling up from a Vermont town of 43,000 to a vast and notoriously complacent nation of more than 325 million. But the enormity of the endeavor seems not to faze Sanders.

He held fast to his Burlington model as a member of Congress and as a 2016 presidential candidate. Last December he told Capital & Main that among his proudest accomplishments on economic inequality were “changing the conversation” and pushing to raise wages to $15 for Southern California employees of the Walt Disney Company in 2018 and at Amazon the following year –both of which happened largely outside of Washington.

“Four years ago when I was here and talked about raising the minimum wage, it was a radical idea,” Sanders said in 2019. “Since then, seven states and the Congress have done it. Four years ago when we talked about climate change being an existential threat to the planet, again, that seemed to be pretty outside the box. Not so anymore.”

Sanders rallied with Disneyland workers and slammed Disney CEO Bob Iger for the yawning gap between his pay and that of his employees. He co-sponsored legislation with Congressman Ro Khanna (D-Calif.) that called for a tax on employers whose workers are forced to depend on government aid programs, including food stamps. They called their bill the Stop Bad Employers by Zeroing Out Subsidies or the STOP BEZOS act. Amazon CEO Jeff Bezos caved to the pressure, raising wages for some 350,000 full- and part-time workers in late 2018.

In Congress, Sanders hasn’t been a prolific legislator, although in 2005 Rolling Stone dubbed him “the amendment king of the House of Representatives” for his success in attaching his priorities to existing legislation. He claimed that mantle in the Senate too, touting, in a 2016 TV ad, his passage of more roll call amendments (those that require a vote) in a Republican congress than any other senator.

He’s also known for a no vote on the Iraq war, his work on passage of a resolution aimed at ending U.S. involvement in Yemen (it was vetoed by President Trump) and a profile-raising eight-hour-long filibuster to protest a deal between President Barack Obama and Mitch McConnell to extend the Bush tax cuts. The speech was eventually turned into a book.

Less often cited is his past chairmanship of the Senate Veterans Affairs Committee. Sanders, along with the late Arizona Senator John McCain and Congressman Jeff Miller, a conservative Florida Republican, authored the Veteran’s Choice Act to end months-long waits for needed health care at the Department of Veterans Affairs in 2014. Sanders is also known for dogged advocacy of community health centers, pushing through $11 billion in Affordable Care Act funding for the clinics, which provide low-cost health care to anyone who needs it.

In a Sanders presidency, however, Capitol Hill deal-making would take a back seat to citizen mobilization as a pressure strategy for turning big dreams into concrete achievements.

A decade ago, some hoped President Barack Obama, who had actually worked as a community organizer, might do the same. But, as Jaime Regalado noted, Obama took a more traditional path. “He thought he could win enough Republican votes to have some of his projects passed or safeguarded. Sanders doesn’t believe in the system Obama was protecting.” Major change, Regalado said, “has only come when the ground shakes, when a lot of people are in the streets and they’re not going away.”

Sanders’ backers, like 22-year-old Valerie Bean, who cheered Sanders at the Moreno Valley rally, are hoping for just such a political earthquake.

“When people try to stay in the moderate area or play it safe,” she said, “change is never going to happen, so maybe it’s time to switch it up.”