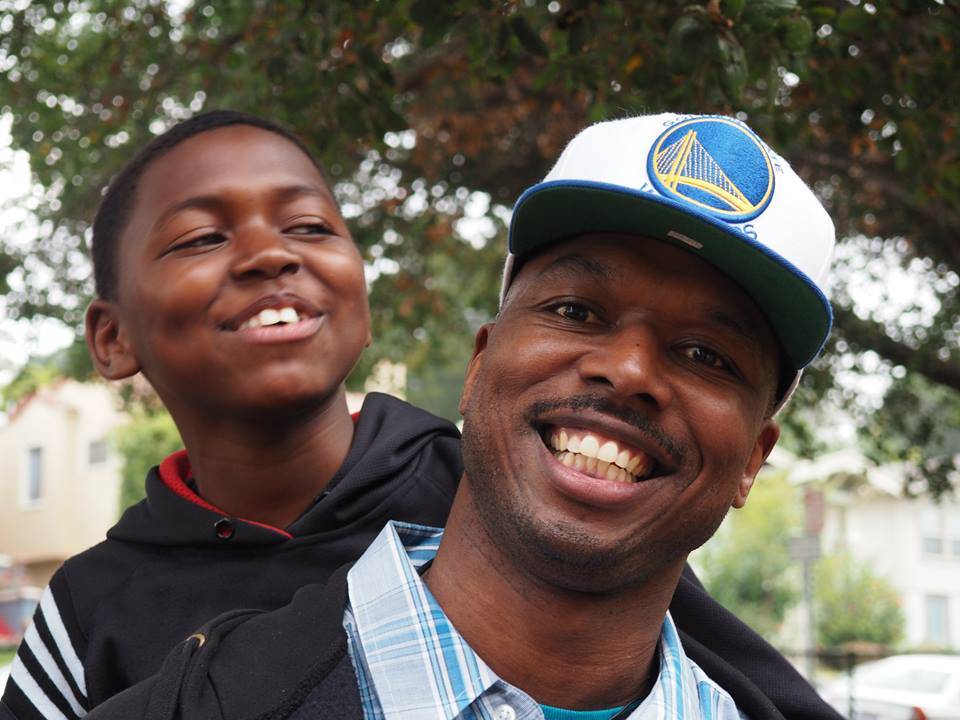 OAKLAND – The growing nationwide movement by cities and counties to raise the minimum wage is currently centered here in the Bay Area, and its success couldn’t be more urgent for workers like John Jones III.

Jones, 40, is a licensed aircraft mechanic but works as a Burger King security guard in downtown Oakland, making $10 an hour — $1 more than California’s minimum wage. His life is a series of financial challenges and daily indignities as he struggles to support his wife D’Nita, his 12-year-old son Kai and his newborn boy, Josiah.

To take a shower in his apartment, Jones has to use pliers to turn on the water because the knobs are broken. He can’t complain to his landlord because he’s behind on the rent. When his family runs out of toilet paper, Jones cuts paper towels into quarters to save a few bucks. He covers the windows in his bedroom with blankets because he can’t afford curtains. To cut down on the water bill, he and his wife only wash their dishes every three or four days. And in the past several months, he’d often skipped meals so that his pregnant wife had enough to eat.

“The idea that people have to live like this in America, in the Bay Area no less,” is disheartening, says the six-foot-two-inch Jones, who still looks like the local high school basketball player he once was. He speaks without a scintilla of bitterness and says that the worst aspect of his job is “the disrespect — when you hear ‘minimum wage worker,’ most people think of teenagers or people who are losers. We’re vilified. People come in with the attitude that ‘You guys are losers’.”

“That stings,” says Jones, who sometimes washes down the sidewalk outside the Burger King and cleans tables inside the restaurant, in addition to his security duties. “People look at us like we are next to nothing. We are just people who are trying to provide for our families.”

In many ways, Jones represents the new face of the low-wage worker at a time when cities and counties across the nation are adopting or considering laws to raise minimum wages to reflect local economic conditions and living costs. So far, 13 cities and counties have approved such minimum wage laws, with Seattle gaining national attention this June when it approved a minimum wage of $15 an hour, to be phased in over several years. The local initiatives come as the federal minimum wage has been stuck at $7.25 an hour since 2009.

“There has been increasing inequality and, at the bottom, stagnating wages in the last decade,” Ken Jacobs, chair of the University of California, Berkeley, Labor Center, says in an interview with Capital & Main. “Minimum wage increases are one tool to bring up that bottom.”

On average, workers in San Francisco would see their annual earnings increase by about $2,800 a year and those in Oakland would receive annual increases of approximately $2,700.

“California is the hotbed of this movement” to raise the minimum wage, says Annette Bernhardt, a visiting professor at the University of California, Berkeley’s sociology department and a scholar of low-wage work, speaking at a conference late last month at U.C. Berkeley’s Institute for Research on Labor and Employment (IRLE).

Avery Dollar, a 28-year-old African American and a single mother of a six-year-old daughter, is typical of those who would benefit. Dollar makes $9.25 an hour as a cashier at Foods Co. grocery store in Oakland. She says a raise would allow her to cook healthier meals instead of cheap processed foods like the corn dogs and chicken nuggets that she pops in the microwave. “It’s gross but we have to eat every day,” she says, adding that a raise in the minimum wage would “make my life so much easier and less stressful.”

Bing Rong Tan, 42, immigrated to the United States three years ago from China’s populous Guangdong Province with his wife and now-14-year-old son. He had hopes of providing his son with a better education. Tan makes $14 an hour directing pedestrians around a hospital construction site in San Francisco’s Chinatown and works about 25 hours a week. His wife makes minimum wage folding clothes at a retailer. The family lives in a tiny, cramped space of about 100 square feet Single Resident Occupancy (SRO) hotel in Chinatown; SROs are residential spaces with a shared bathroom and kitchen that were built and intended for single bachelor workers.

“My experience [in coming to the United States] is very different than what I expected,” says Tan, speaking through an interpreter. “Finding work is a lot harder than I thought. The cost of housing is much higher than I thought. There is such a difference between what we make and what we have to pay for rent and living expenses.”

Like other low-wage workers, Tan says that an increase in the minimum wage won’t allow him to radically change his life, but it will help. “Having a little more every year is important because the rent keeps going up,” he says.

In the Bay Area, opposition to the minimum wage initiatives has been low key.

Gwyneth Borden, executive director of San Francisco’s Golden Gate Restaurant Association, says her group doesn’t like the local initiatives because the measures don’t include an exception for waiters and bartenders, who generally make minimum wage but also get tips. But she says that the association is officially “neutral” on the initiatives.

“We recognize that low-wage workers need a raise,” she tells Capital & Main, but adds, “we would have liked it done differently.”

The initiatives’ supporters acknowledge that restaurant prices will rise slightly if the minimum wage goes up, but they say the price rise would be small. A $10 meal would increase by 27 cents if San Francisco’s measure is adopted, according to one study.

Nonetheless, not all restaurant workers support the minimum wage measures. At Oolong Noodles and Sushi, on Washington Street in San Francisco’s Chinatown, David Kuang, a 27-year-old waiter, says that “It’s no good for the restaurant. If wages are raised, then people will lose their jobs.” He says that he also worries that if wages are raised, restaurants will raise their prices and “people won’t come to eat.”

Opposition has also come from the San Francisco Council of District Merchant Associations, which represents local businesses. The group said in an August press release that the cost of services and commodities will increase, that instead of creating more jobs the opposite will be true and that San Francisco’s fledging manufacturing industry will probably move away.

The Labor Center’s Jacobs says that the research shows otherwise.

“The research here is strong – minimum wage increases have not had an affect on employment or hours.” He adds that research has shown that the costs of San Francisco’s 2003 minimum wage hike were absorbed through decreased employee turnover, improvements in worker performance and small, one-time increases in restaurant prices.

If the measures are adopted, they will affect tens of thousands of low-wage workers in the Bay Area, with pay raises for an estimated 142,000 workers in San Francisco and another 40,000 workers in Oakland. John Jones, the Oakland Burger King security guard, says the raises will be meaningful.

“It will give all of us a breather,” he says. “It will allow me to spend time with my sons” instead of having to work at a second job. “I’ll sleep a little better at night.”