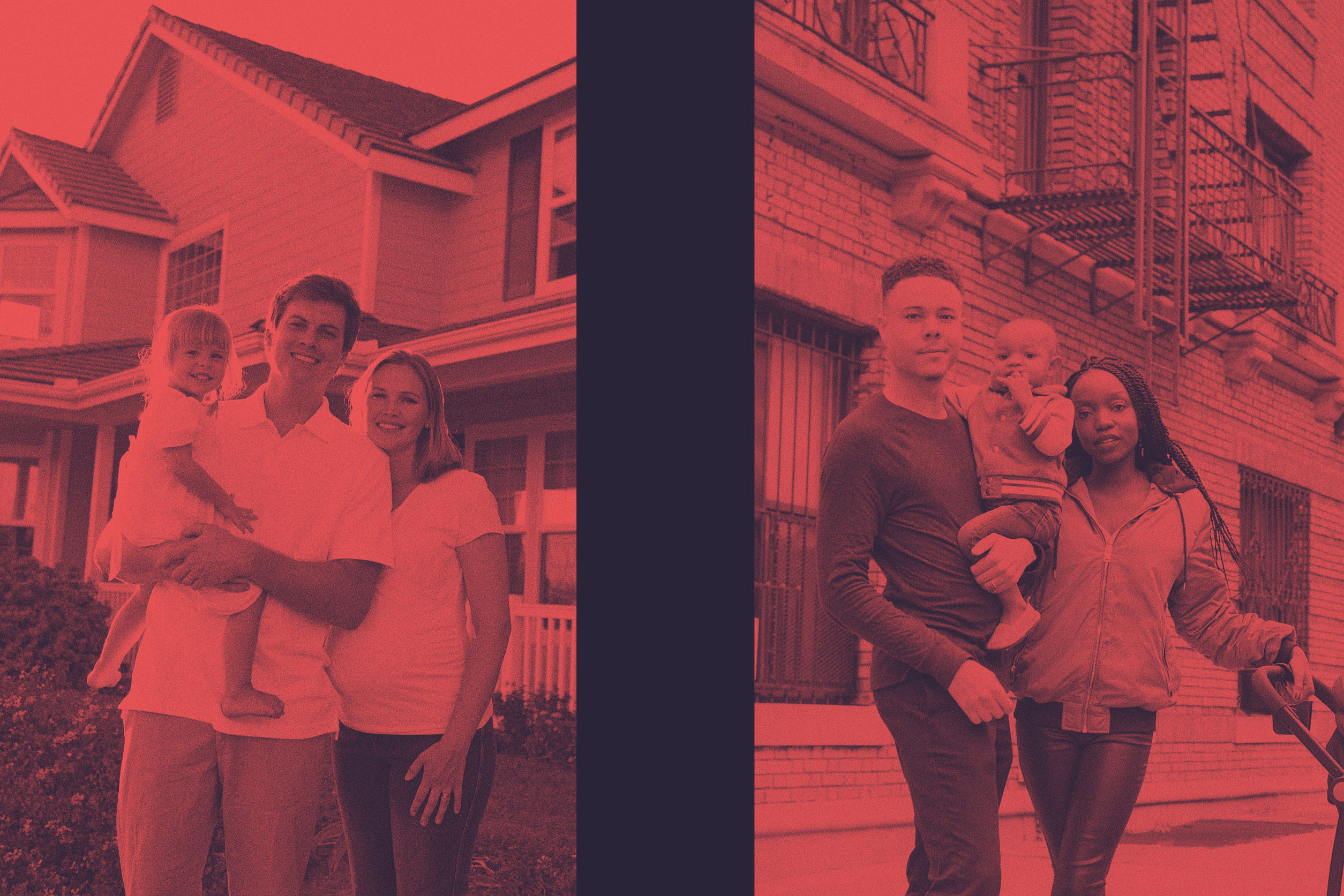 America’s racial wealth gap, pushed to the front of the nation’s agenda during the racial justice protests of last summer, has continued to widen and has indeed worsened during the COVID-19 pandemic.

The impact on Black lives, Black wealth and Black businesses has been enormous. According to the Federal Reserve Bank of New York, more than 40% of Black businesses shut down between February and April 2020. And 44% of Black workers say they have experienced income loss since March 2020, compared to 27% of white workers. Economists and business experts say it will take years for Black Americans, still staggering from the Great Recession of 2008, to recover.

“What COVID did was just peel back the ugly realities of the inequities that exist in the United States,” says Harold Epps, former director of commerce for the city of Philadelphia and senior advisor at Bellevue Strategies. “It just put a spotlight on us, just as the video cameras in Minnesota did.”

Last fall, a study by the RAND Corporation found that tens of millions of Americans could and should be making twice what they’re currently earning — for example, a full-time worker currently earning the national median wage of $50,000 would be making close to $100,000 now — if the country’s economic growth had been shared as broadly over the past 45 years as it was from the end of World War II until the early 1970s. Though the study found similar pay gaps between all racial groups, the wealth gap magnifies the loss of income experienced by Black workers. In other words, if a white and a Black worker each earn $50,000 for a job that should pay $100,000, the white worker is likely to still be far better off because their wealth is far greater than the Black worker’s. As the Federal Reserve Bank of Cleveland has determined, the income gap “is the primary driver behind the wealth gap and that it is large enough to explain the persistent difference in wealth accumulation.”

The Black-white wealth gap is not an accident but rather the result of centuries of federal and state policies that have systematically facilitated the deprivation of Black Americans, says the Center for American Progress in a recent report.

“From the brutal exploitation of Africans during slavery, to systematic oppression in the Jim Crow South, to today’s institutionalized racism — apparent in disparate access to and outcomes in education, health care, jobs, housing, and criminal justice — government policy has created or maintained hurdles for African Americans who attempt to build, maintain, and pass on wealth,” the researchers wrote.

Black Americans have lower incomes regardless of education level, less wealth, less inherited wealth, lower savings and investment rates and lower retirement savings than white Americans, all perpetuating the wealth gap. Though Black Americans have vastly improved the racial gaps in both primary and secondary education, wage and wealth gaps persist and continue to widen.

“A racial gap exists in every income group except the bottom quintile (23.5% Black), where median net worth is zero for everyone,” according to a Brookings Institution Report, “Examining the Black-White Wealth Gap.”

The scale of the disparity in sheer numbers is shocking: Black Americans represent 13% of the U.S. population, but possess only 4% of the nation’s household wealth, and the net worth of a typical white family, at $171,000, is roughly 10 times greater than for a Black family ($17,150) as of 2016. “In fact, the ratio of white family wealth to Black family wealth is higher today than at the start of the century,” according to Brookings. Prosperity Now, a Washington, D.C.-based advocacy and research organization dedicated to wealth equality, says the median wealth of Black Americans will fall to zero by 2053 if things continue as they are.

Having so little wealth and savings creates a cycle of inequity and poverty. It makes it difficult to own a home, qualify for bank loans, afford college tuition or even have a good credit rating. It can also make it more difficult to qualify for rental housing and increase interest rates charged for loans and all types of insurance. Out of desperation, many turn to predatory lenders who charge sky-high interest rates.

“Even if you leveled everything today and said, ‘OK, we’re going to treat everybody equally now,’ you’d still see a perpetuation of the gap,” says Gary Cunningham, president and CEO of Prosperity Now. “There has to be some reckoning, some acknowledgement and some atonement for the history that has went on since slavery to Jim Crow, to the great rip-off of the wealth of Black people in the mortgage crisis.”

Debt is a huge problem for Black Americans

Black Americans appear to be more negatively affected by debt than any other group, according to one report, “Addressing Debt in Black Communities.” Nearly one in five Black households has zero or negative net worth. Additionally, Blacks are the most likely to have high debt payment burdens: Nine percent have debt-payment-to-income ratios above 40%.

“Black Americans still have the most debt,” says- Teresa Ghilarducci, professor of economics and policy analysis at the New School for Social Research in New York City and a nationally recognized expert on retirement. “They’re more exposed to financial fraud. They pay more for their debt, even if they have equivalent credit scores.”

She says Black Americans live in neighborhoods where homes don’t appreciate, are more likely to take on student debt and will more likely have to work in college, so they’re less likely to finish their degrees. That leaves them with student debt, but without a degree.

There has been no success in narrowing the racial wage gap

Black-white wage gaps are large and have grown larger in the last 20 years, according to the Economic Policy Institute.

“If you look at two people doing the same job, and one is Black and one is white, there is a pay difference,” said Nick Abrams, a financial planner and founder and CEO of AJW Financial Partners in Baltimore. “If we started out making less, that’s less money we have to build wealth.”

That wage gap was 26.5% in 2019, according to the Economic Policy Institute. The gap has remained between 18% and 22% for workers with high school education, college degrees and advanced degrees.

There is a huge disparity in home ownership

Only 42% of Black Americans own homes, compared with 72% of white Americans. Despite some gains, there has been a 20% to 30% gap in Black-white home ownership rates for the past 100 years, according to the National Community Reinvestment Coalition.

“You had policies like redlining, and practices such as if any African American tried to get outside of their designated area and move into a more upwardly mobile wide area, you would have whites super organized against their presence in the neighborhoods,” said Maya Rockeymoore Cummings, widow of former Rep. Elijah Cummings and CEO of Global Policy Solutions in Washington, D.C.

She said the 2008 housing crisis devastated Black communities across the country. “Homeownership has typically been a major way that white families have built wealth. We saw how unsustainable exotic mortgages were used to strip communities of color of their wealth.”

The gap in retirement savings is enormous

Ghilarducci says one of the biggest issues in the racial wealth gap is the difference in retirement savings.

“In general Blacks have lower incomes, so the contributions to their retirement plans are lower,that’s also true for women,” Ghilarducci says. “Men get the most out of our retirement system.”

As a result, the number of Black Americans (62%) who don’t have money in a retirement account is almost twice the number of whites (37%), according to the National Institute on Retirement Security. The typical household headed by whites aged 47 to 64 holds $105,600 in pension/IRA wealth, which is more than 10 times that of the typical Black household ($10,300), according to Social Security and the Racial Gap in Retirement Wealth. And only 33.5% of Black U.S. households owned stocks in 2019, according to the Federal Reserve, compared to 61% of white households.

Abrams says Black Americans need to stop being afraid to take risks and embrace the stock market. Historically, it has outperformed every other investment.

“Last year, we saw the market take a huge dive,” he says. “It came right back. If you look at, you know the 2007-2009 crash, the market went down and took a huge hit. It came back up and was still on this historic run in the market. No matter what it has done, long term, the markets have always performed. And so, Black Americans must learn to not be afraid to put our money at risk, and have it working for us.”

Are there ways to narrow the wealth gap?

There are some solutions advanced by economists and embraced by some politicians that would considerably narrow or even eliminate the racial wealth gap.

The idea, proposed by Duke University economist William Darity and Ohio State University’s Darrick Hamilton, would be to give every child a savings account at birth. Financial guru and author Ric Edelman of Edelman Financial Engines has a similar proposal. The Darity-Hamilton plan would provide each child with a $500 to $50,000 trust fund, depending on the family’s household income. The recipient wouldn’t be able to access the money until they turn 18. Edelman proposes $7,500, though it would be funded differently. Edelman’s proposal is focused on funding for retirement, so the money would not be available until the recipient turned 66.

“We find that baby bonds can have a significant impact on the wealth gap when examining the wealth available to each child when reaching 18,” according to the financial services firm Morningstar. In fact, Morningstar says the Darity/Hamilton proposal would slice the racial wealth gap in half.

Sen. Cory Booker (D-N.J.) and Rep. Ayanna Pressley (D-Mass.) have sponsored legislation modeled after the Darity/Hamilton proposal. The government would put $1,000 in an interest-bearing account for every child born in the U.S. and then contribute up to $2,000 each year until the child turned 18. Lower-income children would receive higher payments. By age 18, the poorest children would have about $46,200; children of the wealthiest parents would have about $1,700, when they can tap the funds for things such as college tuition or buying a home.

In their book “From Here to Equality: Reparations for Black Americans in the Twenty-First Century,” Darity and his wife/co-author, A. Kirsten Mullen, make the case for reparations and offer a framework for how they would be paid.

They estimate the cost of reparations would be $10 trillion to $12 trillion. That would allow for a $200,000 to $250,000 cash transfer to each eligible participant through a trust account or endowment.

“Reparations is a legitimate policy response. And, by the way, when it is a legitimate policy response it has been used by the United States throughout history,” says Rockeymoore Cummings. “It just hasn’t been used to benefit African Americans. It seems to be used to benefit everybody else. We shouldn’t think it is something that is out of bounds for African Americans.”

Rockeymoore Cummings says another option that would make a difference would be housing strategies that guarantee below market rate housing opportunities and homeownership opportunities for Black Americans.

“These strategies would give people an opportunity to have a piece of the wealth pie through renovation subsidies and other things that can help them to maintain and keep properties in rapidly growing areas where equity is increasing,” she says.

“Unless we intervene in a real way that puts some things in place for people of color to build wealth and to equalize the playing field so that my child, your child and your grandchildren’s children actually can live in a society that works equally well for everyone, nothing will change,” says Cunningham. “For that to happen for Black people, there’s got to be some reckoning for the positions that we find ourselves in today.”