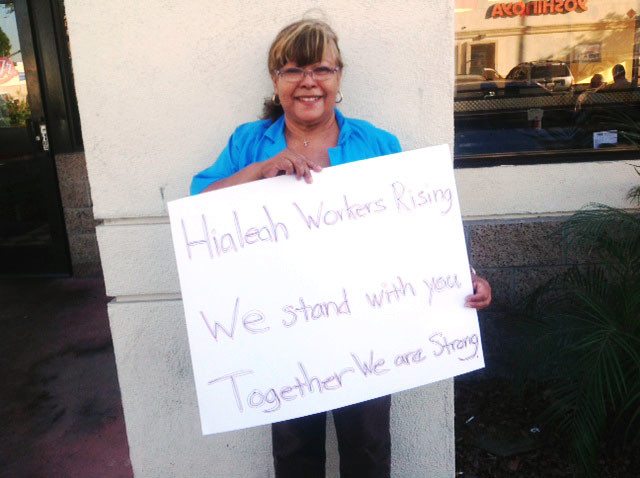 November, 2013 was not a good month to be a Walmart corporate executive.

The headaches for the nation’s largest employer of low-wage workers began November 18, when the National Labor Relations Board found that Walmart illegally threatened, disciplined and fired employees over last year’s Black Friday strikes and protests. The finding was the first step in an NLRB complaint asserting that the retail giant violated workers’ rights.

The Black Friday protests have been a driving force behind the core demand by Walmart employees that the company raise the annual earnings for sales associates above the federal poverty line.

That NLRB bombshell soon snowballed into a public relations disaster when, on the same day, news broke that a Canton, Ohio Walmart store had instituted a Thanksgiving food drive on behalf of store employees unable to afford a holiday meal. The Canton story was subsequently credited with reigniting the congressional fight for the first increase in the national $7.25-per-hour minimum wage since 2007. (Walmart’s 2013 profits are projected to be $17 billion.)

For at least a part of his November migraine, outgoing Walmart CEO Mike Duke, who earned a cool $20.7 million last year, can thank a fiery 66-year-old grandmother and $17.71-per-hour men’s department manager from the corporation’s Paramount, California store.

Rosa Valenzuela is a 19-year Walmart employee and has been an outspoken member of OUR Walmart, the non-union workers’ group backed by the United Food & Commercial Workers union that has been at the forefront of the effort to pressure Duke into addressing worker grievances over wages, scheduling and management retaliation.

Getting arrested in civil disobedience actions and spending most of her free time as an activist on the front lines of a national labor dispute is not a role that Valenzuela sought for herself.

Rather, as one of the few senior department managers in a store plagued with high management turnover, the single mother and grandmother of three increasingly found herself besieged by the desperate pleas of friends and even long-term sales associates — including other single mothers with young mouths to feed — who were getting their hours cut back from full-time to as little as 16 hours per week.

“People come to me with their reasons,” reflects Valenzuela, “because they know I’m not going to do something bad or say something bad about them to Walmart [management]. They come to me because they’ve got no other way to go. They say that Walmart [has an] open door [policy]. That’s not true. There’s no open door. If you go and complain about it they will treat you bad or they cut your hours.”

Valenzuela says that the troubles began around six years ago when the Paramount Walmart began drastically cutting associate work hours – even as it cut semiannual raises of 30 to 40 cents an hour back to once a year or, in some cases, no raises at all.

And, while the store workforce’s hours have been dramatically cut, its actual workload has remained the same. In the last three years cashiers, associates, floor managers and department managers have been forced to fill the breach by doubling up on duties outside their work categories.

“Before, they gave you a title,” Valenzuela says. “You’re supposed to be just a department manager or be a cashier or something like that. But now they want for you to do everything in the store — from unloading the trucks to stock[ing shelves] to whatever they need. That’s not fair. They cut people and now the people who [remain] have to do more than what they’re supposed to do.”

Valenzuela says she regularly finds herself on the loading dock unpacking trucks. She has little choice.

“We are unloading trucks, we stock, we push pallets — everything! Like I said, if you don’t do it, you know, they punish you. They say, ‘Okay, you don’t want to do it. Fine.’ And later on, they cut your hours.”

Valenzuela is more fortunate than most. Her long tenure and senior, fulltime position have afforded her a certain amount of immunity from the fear of retaliation and have allowed her to speak her mind, whether it’s at a store staff meeting or on last week’s Black Friday picket line.

“I’ve been working there for 20 years,” she says, “and when there’s a meeting or something, I always got something to say. I defend myself. Every time when I have to talk, I talk. I don’t need anybody to talk for me about my rights, you know? I always say what I have to say because I’m not a one to put my head down. I always speak for myself.”

Valenzuela has made this fearlessness the signature of her work with OUR Walmart.

“My thing is to get people to be less afraid about talking about what they really need to be talking about,” she says. “And I really want, like I said, for them to live better —with respect from our store managers. Because this is no way to live when you have to put your head down. … I want people to speak for themselves. I want people to fight for their rights. That’s what I want. That’s why I joined. That’s the reason why I do this.”

“Because,” she adds, “you never know. When you have grandkids and nephews, you want a good place [for them] to work like it was 20 years ago [for me]. But it’s not that way anymore. But that’s what I’m looking for.”

Related Topics:OUR WalmartWalmart LA
Up Next