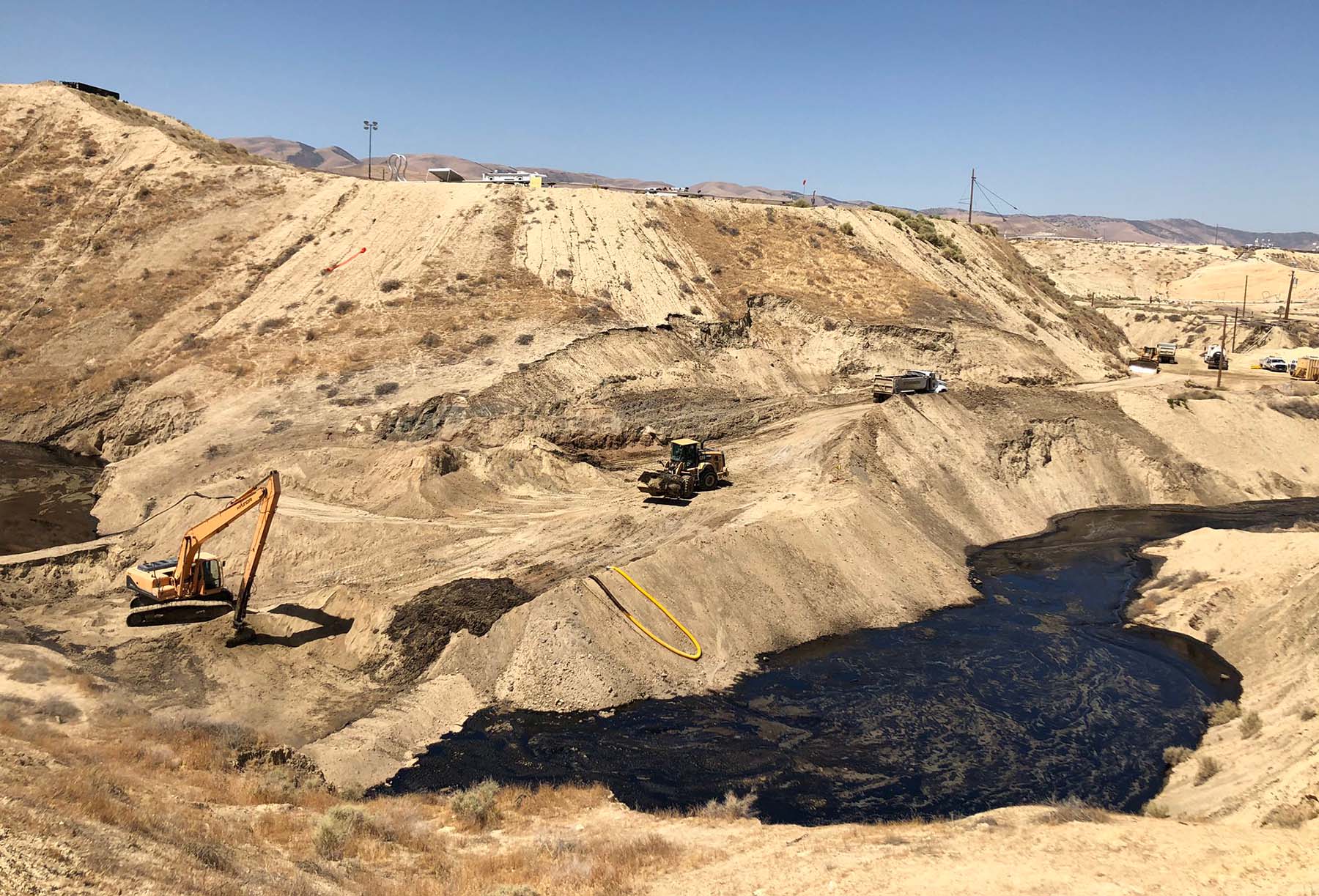 Cleanup operations at the site of an oil spill at the Cymric Oil Field in Kern County in July 2019. Photo: California Department of Fish and Wildlife.

Deep in the oil fields of western Kern County, a little northwest of the century-old town of McKittrick, hundreds of thousands of gallons of crude oil and wastewater filled with toxic chemicals have been seeping out of the ground for two years, in an area where companies operate hundreds of wells.

As of this month, exactly two years after it began, more than 576,240 gallons of oil and 4.2 million gallons of wastewater have seeped from the ground into a dry streambed. The ongoing pooling in the Cymric Oil Field “McPhee” lease area ranks among the largest spills in California history, though the state says the spread of spills generally in the Cymric field has been reduced by 90% since 2019.

Chevron, the company responsible for the McPhee spill, appears to be violating a law prohibiting so-called surface expressions. But the California Geologic Energy Management Division (CalGEM), the regulating agency responsible for enforcing such rules, hasn’t issued penalties to Chevron, apart from a fine it levied against the company for a nearby spill that occurred in May 2019.

More alarming, argue environmentalists, is that Chevron is selling the oil that it collects from the spill, even though it’s coming from a seep prohibited by regulations. CalGEM says it has yet to “assess” the amount of money Chevron has made off selling oil from this surface expression since November 2019.

That California is allowing Chevron to sell oil bubbling up from a prohibited surface expression is a striking example of the state’s climate dissonance.

In a statement, Chevron spokesperson Tyler Kruzich said the company has “made significant investments” into keeping the seep contained while implementing mitigation plans “with the goal to stop” the leaks.

Last year, The Desert Sun and ProPublica reported there were more than 70 “low energy” seeps in the state that generated revenue for companies, and all were exempt from CalGEM’s prohibition on surface expressions. The state confirmed to Capital & Main that its rules barring surface expressions don’t prohibit companies from selling oil recovered from them, and insisted companies face high costs in the form of potential penalties, spill response, and suspension of approvals for relevant production permits.

In spite of mitigation efforts, neither Chevron nor the state know when the seep will end. That California is allowing Chevron to sell oil bubbling up from a prohibited surface expression, with apparently no consequences for now, is a striking example of the state’s climate dissonance.

Earlier this month, Gov. Gavin Newsom’s administration submitted California as an associate member of the Beyond Oil and Gas Alliance, a group formed at the U.N. climate talks committed to phasing out production and use of oil and gas completely. The state joins Denmark, Costa Rica, Greenland, and Québec, among others. Yet Newsom’s administration has continued issuing permits for new and reworked oil wells throughout his term.

In a phone call from the COP26 event in Scotland, California Speaker of the Assembly Anthony Rendon told CalMatters that the state was “no longer leading the world” on climate policy, falling behind peers like the city of Paris and the German state of Baden-Württemberg.

The Cymric Oil Field, along with the nearby Belridge and Midway-Sunset fields, collectively emitted far more greenhouse gases than any other field in the state last year.

Newsom’s administration vowed to end fracking by 2024 and has announced other lofty goals on a decades-long timeline. The Western States Petroleum Association, the largest such trade group in the state, is suing CalGEM for denying permits for new fracking wells this year. The agency’s director, Uduak-Joe Ntuk, cited climate change as a reason for the denials.

And yet the oil at the Cymric Oil Field still seeps out of the ground, violating regulations strengthened by Newsom’s administration.

Half a dozen oil spills and a blowout have occurred in the field since 1999, according to The Desert Sun and ProPublica. The field is home to a number of cyclic steam injection wells, an intensive form of oil drilling where steam is pushed down at high pressure to loosen oil in a layer of what is often diatomite. Much of California’s remaining oil reserves are extracted this way.

The Cymric Oil Field, along with the nearby Belridge and Midway-Sunset fields, collectively emitted far more greenhouse gases than any other field in the state last year.

Surface expressions occur when oil and wastewater break through the ground via subsurface fractures and are likely caused by steam injection. Heated crude oil becomes less viscous and shoots out of the surface in unpredictable ways. It can also shoot out of damaged wells or pool on the ground.

In October 2019, CalGEM ordered Chevron to pay a civil penalty of $2.7 million for surface expressions in the Cymric field. According to state documents, the company reaped $399,231 in “economic benefit” from selling the spilled oil from the May 2019 incident. But it has paid none of the penalty, because it filed a notice of appeal and is engaging in settlement discussions with the state.

“The regulations say that the [surface expressions] are illegal, but if you have a regulator who’s unwilling to enforce the law, it doesn’t do much good.”

~ Hollin Kretzmann, senior attorney with the Center for Biological Diversity

CalGEM hasn’t assessed how much economic benefit Chevron has enjoyed throughout the two year duration of the McPhee spillage, according to department spokesperson Roper.

Hollin Kretzmann, senior attorney with the Center for Biological Diversity, said the fact that CalGEM has not collected any fines from Chevron for the spills calls the agency’s enforcement capabilities into question.

“The regulations say that the [surface expressions] are illegal, but if you have a regulator who’s unwilling to enforce the law, it doesn’t do much good,” Kretzmann said. “Chevron is selling the oil for additional revenue, so it’s very perplexing, to say the least.”

Eric Laughlin, a spokesperson for the California Department of Fish and Wildlife, said that his agency has a wildlife officer assigned to the area and has recorded no injuries to animals to date as they related to the McPhee spill. Testimony from another agency member, during a hearing on surface expressions in January 2020, indicated that animals in the Cymric Oil Field near other spills have been seen covered in oil.

The state has faced other issues stemming from its permitting of cyclic steam injection. An audit last year found that at least 100 injection wells were approved without proper environmental reviews; CalGEM has since said the issue has been resolved, though the Center for Biological Diversity is suing over it.

And CalGEM’s Class II UIC Program, which oversees the state’s injection wells for oil and gas production as well as wastewater disposal, has been out of compliance with the EPA’s Safe Drinking Water Act since 2012, and the state now risks losing oversight of the program.

For a century, Chevron has been a political powerhouse in the state. This year alone it has spent $3.55 million lobbying both the Legislature and various agencies in the executive branch, on everything from carbon capture and fees for promoting zero emissions vehicle goals to opposing physical buffer zones between oil drilling operations and homes, schools and health facilities. The company also donated at least $438,400 to candidates and associated committees in state legislative races in 2020.

In May, Capital & Main filed a public records request for communications between Chevron’s lobbyists and employees at CalGEM, as well as other executive agencies, based on issues Chevron said it lobbied on in the first quarter of the year.


Note: This article has been updated to clarify that California Department of Fish and Wildlife has recorded no animal injuries related to the McPhee spill.