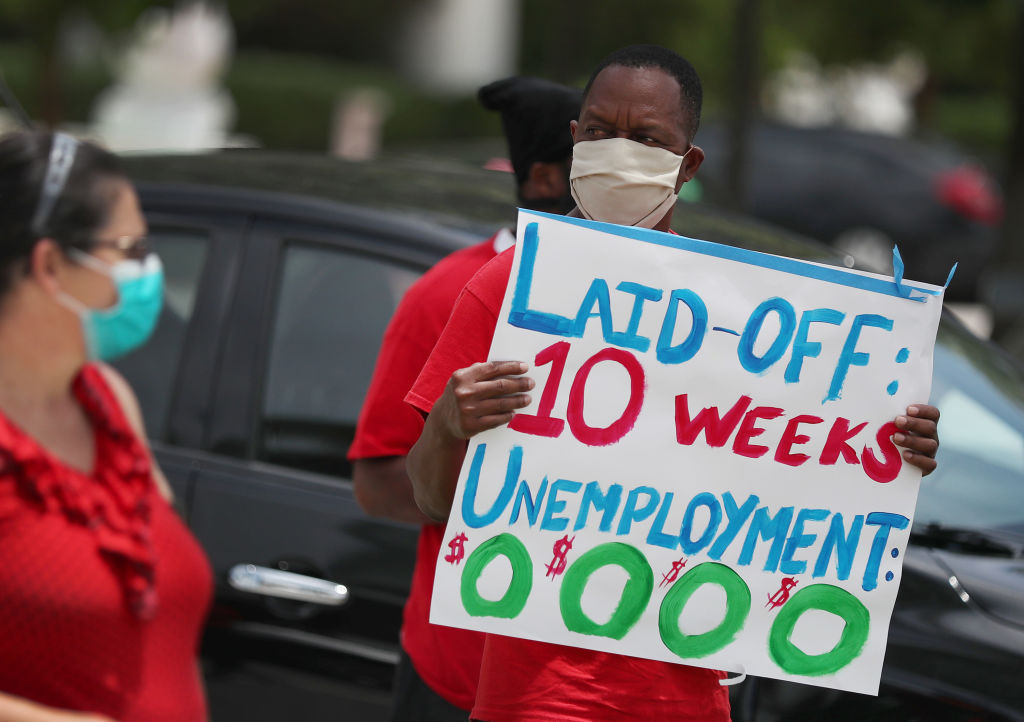 Congress has responded to the coronavirus pandemic, and the ensuing economic recession, with record-breaking trillion-dollar stimulus packages aimed at matching the scale of the crisis. But the latest bill to pass the Democrat-led House of Representatives — the $3 trillion Health and Economic Recovery Omnibus Emergency Solutions (HEROES) Act — has been called “dead on arrival” by Senate Republicans, who promise this fourth aid bill, once whittled down, will be the last.

Democrat and Republican leaders alike are balking at the cost of recovery and seeking ways to limit federal spending to keep the nation’s deficit low — an approach likely to prolong and deepen the financial crisis, according to economist Stephanie Kelton.

“We can [rebuild the economy] more equitably, more resiliently, to address long-standing problems in our communities.”

Kelton spoke to Capital & Main about the federal government’s response to COVID-19 and how federal spending could mitigate the recession and create a new economy. Kelton is the most prominent advocate of modern monetary theory, which holds that Congress has the power to fund big bills without worrying about how to offset the costs. A professor of economics and public policy at New York’s Stony Brook University, Kelton was recently selected to serve on an economic unity task force created by presumptive Democratic presidential nominee Joe Biden and Senator Bernie Sanders to develop the party’s 2020 policy platform. She previously served as a chief economist for Democrats on the U.S. Senate Budget Committee and as a senior economic advisor to Senator Sanders’ 2016 and 2020 presidential campaigns. Her new book, The Deficit Myth: Modern Monetary Theory and the Birth of the People’s Economy, will be published this week.

Capital & Main: Federal Reserve Chair Jerome Powell recently called on Congress to spend more now to avoid long-term economic damage. But Democratic leaders like House Speaker Nancy Pelosi and Rep. James Clyburn continue to claim they can’t figure out how to pay for it. What is the Fed asking of Congress, and what is Congress worried about?

Stephanie Kelton: Chairman Powell is saying what Federal Reserve chairs usually don’t: He is making an explicit plea to Congress not to repeat the mistakes of the past.

When President Barack Obama was beginning to take office during the Great Recession, senior advisor David Axelrod helped talk him out of a bigger economic stimulus, leaving the burden to the Federal Reserve, then chaired by Ben Bernanke. Congress passed the $787 billion American Recovery and Reinvestment Act. It became apparent quickly that it was too small, and Congress essentially refused to do more. The reason was, as it is now, fear of “sticker shock.”

“Disbursing cash from the federal government to help state and local governments is the most critical thing we can do right now.”

When the Congressional Budget Office completed cost estimates for the HEROES Act bill, Pelosi looked at the numbers and said she wanted to avoid sticker shock. So she pulled back on, for example, Rep. Pramila Jayapal’s Paycheck Guarantee Act. (Last month, Jayapal introduced the Paycheck Recovery Act.)

Powell says the biggest difference between monetary policy (what the Fed can do) and fiscal policy (what Congress can do) is “the Fed has lending powers, not spending powers.” When you lend, people have to take on debt, and right now is not a great environment to borrow a lot of money. But Congress can just spend money. And when they do, we own that cash free and clear. We don’t have to pay it back. So Powell is saying go for it, don’t leave this to us or we’re likely going to end up with another protracted, painful economic recession.

The HEROES Act includes more than $1 trillion in aid for state and local governments. But Senate Majority Leader Mitch McConnell and Treasury Secretary Steven Mnuchin, the White House’s stimulus negotiator, say this assistance will be put on hold and likely scaled back. What role could aid for states play in the nation’s recovery?

Disbursement of cash from the federal government to help state and local governments is the most critical thing we can do right now. A trillion strikes me as a number that is commensurate with the need.

“We can make sure that every single person who lost jobs in the last two and a half months can be reemployed.”

Think of it like trying to get a car to take forward motion. You can’t drive a car with one foot on the gas and one on the brake at the same time. The Federal Reserve and Congress are trying to use monetary and fiscal policy to prevent the economy from totally stalling out. They’re trying to climb the hill, so they push down on the gas pedal.

But there’s a foot on the brake at the same time — governors, mayors and city councils across the country slashing their budgets, cutting education, cutting essential services and laying off teachers, firefighters and police.

With the U.S. economy in such a fragile state, is it possible to reshape it and tackle issues like inequality?

Not only can we do that, but I think that if we fail to do that, we will have wasted an enormous opportunity.

The virus has helped to lay bare a whole host of problems in our economy. Some people already knew that those problems were there. Senator Sanders has been talking about income and wealth inequality, and racial disparities in health, for a very long time.

“For a while the Democratic Party embraced [FDR’s] vision.
Where are those values today?”

As the pieces of our economy fall apart, you have two choices. Pick them up, reassemble them and go right back to the economy that we had — an economy that was so fragile that a virus was able to take 40 million jobs and [is projected to take] health care from 30 million people. Or we can pick up the pieces and assemble them differently this time. The opportunity lies in recognizing that the second option is within our reach.

We can build it back together more equitably, more resiliently, to address long-standing problems in our communities, in our health disparities and climate. It just isn’t clear who’s laying out that vision. Who has that vision to put the pieces together differently? What are the policies that are going to get us there? What’s the world going to look like on the other side?

Are there existing visions for remaking our economy that our elected officials could draw inspiration from?

In a lot of ways, we make this harder than it needs to be. If we want to get to a world where we are ensuring basic protections that include social and economic safety for all of our people, those rights were enumerated by  President Franklin Delano Roosevelt decades ago and left for the Democratic party as a blueprint. For a while the party embraced the broad goal, the vision. Where are those values today?

FDR gave us a mission-oriented Economic Bill of Rights in 1944 that enumerated eight things we should strive to ensure every person in this country has a right to.

You have a right to a job. So how do you do that? There’s a federal jobs guarantee proposal out there. We can make sure that every single person who lost jobs in the last two and a half months can be reemployed. And we don’t have to wait years to get those jobs back. We can be proactive and create employment around building the kind of economy that we want.

FDR enumerated a living wage, so the job should pay a living wage. He said people should have a right to housing, education, health care. How do we do that?

There’s already legislation. Lawmakers have written these bills — they just don’t pass them. But if you vote for it, the spending will happen. That’s the trick. When Pelosi says she doesn’t know how to pay for it, she means without adding to the deficit. But surely that should not be what holds us back as a people when it comes to building the kind of economy and the kind of world we want to live in.