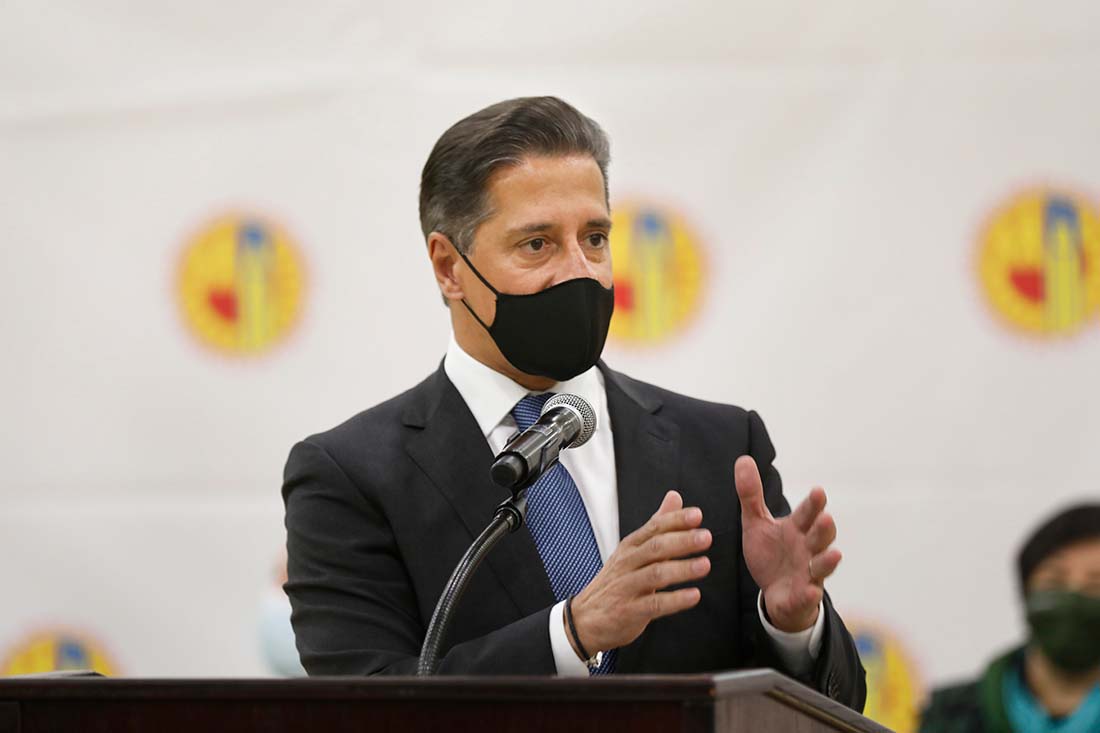 When Los Angeles Unified School District’s new rockstar superintendent, Alberto Carvalho, formerly of Miami-Dade County Public Schools (MDCPS), concluded his remarks at a press conference on Dec. 14, the first question he received from the media was not about vaccine mandates, teacher shortages or the omicron variant. It was about charter schools. Would the new superintendent expand them?

“Thank you so much for starting with the easiest questions first,” Carvalho said, drawing laughs from the press and school board members seated behind him.

Carvalho’s first question, and the rain pattering against the Edward Roybal Learning Center gymnasium, made it feel like it was still winter 2019, when United Teachers Los Angeles (UTLA) picketed in January storms against charter school expansion, among other issues. Critics accuse charters of siphoning desperately needed funds out of the public school system and strangling district schools under the guise of saving public education from itself. Charters are largely nonunion. They have been accused of exploiting teachers and rejecting special education students. They sometimes shutter without warning.

Los Angeles, the city of the late billionaire Eli Broad, one of America’s most influential charter advocates, has the most charter schools in the country, some 280. New York City Public Schools District enrolls roughly 400,000 more students than LAUSD and runs eight fewer charter schools. In Los Angeles pro-charter groups spent more than $13 million on school board races in 2020, and hold a 4-3 majority.

So where does Carvalho stand? During his 13 year tenure in the Sunshine State, the number of charter schools in the south Florida district rose from 65 to 145 (while more than 30 charter schools also closed). More campuses were converted into magnet programs offering specialized education in subjects like robotics, computer science or performing arts: In 2010, around 41,000 Miami students attended magnets, and by 2019 that number had risen to more than 72,000. The Miami magnets, however, are operated by the school district and not by private owners. “I have always been a proponent, and dramatically expanded, publicly offered, accountable choice in Miami-Dade public schools,” Carvalho said at his press conference, referring to his investment in public magnet schools. “In Florida, charter schools are enabled by Florida statute, and school boards, by and large, do not have great latitude in the approval of charter programs.”

Boosting school choice was one of Alberto Carvalho’s answers for a district in freefall when he took over as Miami-Dade County Public Schools Superintendent in 2008.

Choice has marked his career. In a 2020 interview with Khan Academy founder Sal Khan on Facebook Live, Carvalho explained that over 73% of Miami-Dade students were enrolled in schools of choice, either magnets or charters. “That means parents and students are making choices about the types of programs, modalities of learning, something actually excites them, if they want robotics, coding, visual arts, cybersecurity, there is something for everyone,” he said. “One choice fits none in Miami-Dade.” Students and families could select from over 1,000 choice programs in the district, he explained.

Boosting school choice was one of Carvalho’s answers for a district in freefall when he took over MDCPS in 2008, at the beginning of the great recession. Graduation rates were at 56% districtwide, he told Khan, and some schools’ graduation rates dropped as low as 35%. Today, more than 90% of Miami-Dade students graduate from high school and the school system is A-rated in Florida. Crucially, Carvalho insists, when he became superintendent only 30% of Miami students were taking advantage of “choice programs.”

Thanks to the district’s high profile success, Carvalho is now beloved in Miami. “In this world nobody is perfect, but as a superintendent he is as close to that as you can get,” says Jorge Garcia, executive director of the Dade Association of School Administrators. “He’s really a visionary. He certainly turned this district around.”

Carvalho’s education philosophy is “all about choice and competition,” says Carol Burris, executive director of the nonprofit Network for Public Education. “He’s the choice man: If you just give parents the right choices, they’ll make the right choices, and everything will be great.”

Burris is less impressed with his record. Graduation rates are the easiest numbers to boost, she says, by offering students more opportunities to pass their classes. An increase in underlying achievement numbers, like National Assessment of Education Progress (NAEP) scores, is more telling, and they remained stagnant during his tenure (particularly for Black students).

The superintendent was also ensnared in a district scandal involving an online charter school, K12 Inc., which the district hired to implement distance learning for the 2020-2021 school year. In 2016, the state of California sued K12, accusing the company of failing to educate students, who returned abysmal achievement numbers, and inflating attendance rates, all while accepting public money. The lawsuit resulted in a $168.5 million settlement. Carvalho and Miami-Dade selected K12 anyway, offering it $15 million in a no-bid contract for the 2020-2021 school year.

“I don’t expect [Carvalho] to come in and say things that are going to immediately tick off a third, half of the board. That’s not how he is. He tries to find agreement.”

The bid was still pending the first week of school. The rollout of its online learning system was a disaster for K12, with students and teachers locked out of the platforms, faltering sound and video feeds and erased class content. As an apology to stressed Miami teachers, K12 donated $1.57 million to the Foundation for New Education Initiatives (FNEI), a nonprofit affiliated with the district and managed by Carvalho and other school officials. The money was to be distributed by the nonprofit to teachers in the form of $100 gift cards. The donation prompted an investigation by the Florida inspector general.

Carvalho first hired K12 in 2010 to run MDCPS’ virtual homeschooling program. After investigating the donation to FNEI, the inspector general’s office found no evidence of wrongdoing, but said that a donation to a nonprofit run by Carvalho and other district officials, from a company with a bid pending with the Miami district, gave the appearance of impropriety.

School board member Jackie Goldberg, who was elected promising to stand up to charters in the wake of the 2019 UTLA strikes, does not expect Carvalho to be a staunch charter advocate in Los Angeles.

“I do not believe that this man is interested in 4-3 votes,” Goldberg adds, referring to the pro- and anti-charter factions that split the school board. “I don’t expect him to come in and say things that are going to immediately tick off a third, half of the board. That’s not how he is. He tries to find agreement.”

Carvalho shrewdly used magnet programs to ward off the threat of charters in Miami, Goldberg notes, doing so in an era when deeply pro-charter governance at the state level made expansion practically an inevitability. Carvalho limited its impact.

“I think he saw what he needed to do to stay on top of [charter expansion],” she says. “That’s one of the areas where we’re going to watch him closely.”

Carvalho speaks of his record on choice in the same terms: A school choice tsunami was coming to Florida in 2008, and he chose to ride the wave rather than drown in it. Magnet schools provided public, district-controlled competition with charter schools.

Carvalho said he would not automatically press forward with Student Centered Funding, an initiative that ties school funding directly to student enrollment.

“We have a Legislature here that is highly invested [in charter expansion],” says Baez-Geller. “It’s been hard to find loopholes to these laws. As a school board member, I learned that our hands are completely tied.”

On Dec. 14, Carvalho said he would not automatically press forward with Student Centered Funding (SCF), an initiative championed by his LAUSD predecessor, Interim Superintendent Megan Reilly, who sat behind Carvalho in the Roybal gym. SCF ties school funding directly to student enrollment and is seen as a cornerstone of school choice, introducing competition to public education by financially incentivizing schools to win students from other schools and then financially punishing the losers. A favorite policy of former education secretaries Betsy DeVos and Arne Duncan, Student Centered Funding leads to school closures and social segregation, critics say. Carvalho told Capital & Main he was concerned the model could result in inequalities.

In the 13 years Carvalho has overseen MDCPS, seven superintendents came and went in Los Angeles. If his stint in Florida is any indication, Carvalho will not follow his predecessors through the revolving door in the superintendent’s office at 333 South Beaudry Ave. He is here to stay. How he manages the district’s charter wars could shape the future of public education in Los Angeles.

The turbulent 2010s ended in stalemate between pro- and anti-charter forces in LAUSD, with charter advocates overseeing the largest expansion of school choice in the country and UTLA replying with its popular teachers’ strike, which led to some limits on charter growth. In the 2020s, it may be Carvalho who picks a winner.