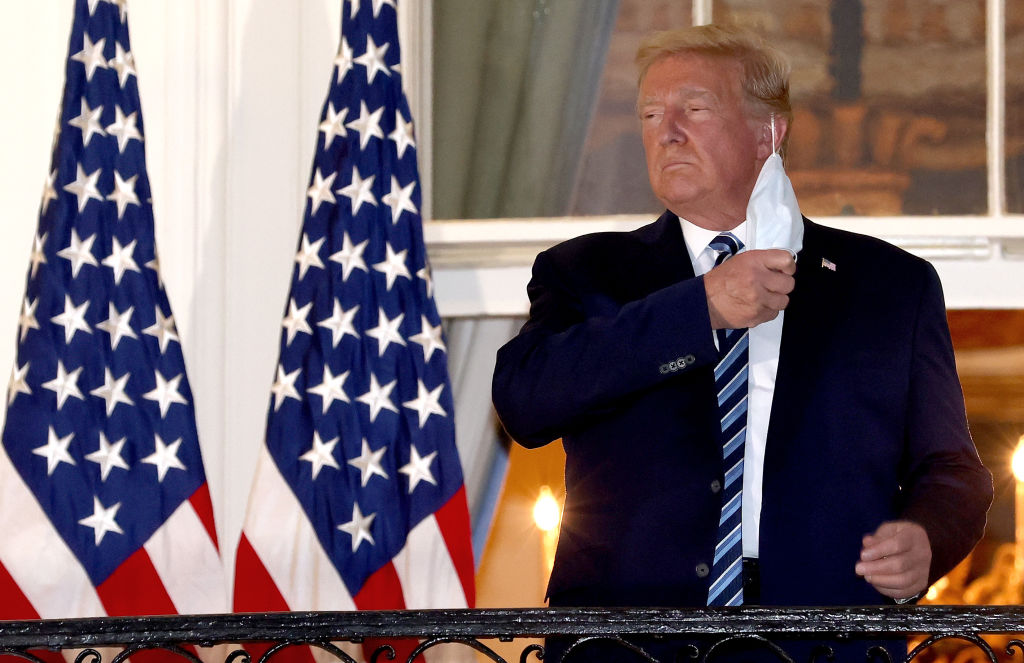 From her position as a nurse at Kaiser Permanente South San Francisco Medical Center, Eunice Balancio sees the damage. The abject lack of political leadership on COVID-19 has led to untold misery. She and her colleagues have at times struggled to obtain basic gear such as personal protective equipment (PPE). And active misinformation, much of it from the president himself, has led people into wrongheaded decisions that affect their lives, often drastically for the worse.

“We take care of these patients 24/7,” Balancio said. “The saddest part is when you watch a patient die alone because of COVID. My message is to take this seriously and not downplay it – which has been in contrast to the very words and actions of the president.”

Trump’s catastrophic response to the pandemic has mobilized the nation’s nurses to push back with their voices and their votes.

Donald Trump’s inability to reckon with the truth of the coronavirus is readily apparent by the numbers. With 8.2 million current COVID cases and more than 221,000 deaths, the U.S. is a global leader in the sorts of statistics no one wants to be associated with, and Trump’s insistence on minimizing the true risk while promoting quack medicine has only exacerbated the problem.

In any year, such a failure to lead would be catastrophic. In 2020 America, it has also mobilized the nation’s nurses to push back with their voices and their votes.

In July, the National Nurses United, which represents more than 155,000 members nationwide, emphatically endorsed Trump’s rival for the presidency, former Vice President Joe Biden. The NNU’s statement read, in part, “For nurses, who have been struggling every day for months on the front lines of the worst pandemic of our lifetime, hampered by President Trump’s abandonment of public health and safety, the stakes in November could not be sharper.”

An opinion piece in Newsweek signed by more than 700 nurses made similar points, saying Trump has “grossly mismanaged the nation’s response” to the COVID-19 outbreak and calling the loss of life and proliferation of long-term care issues “stunning and unacceptable.” The nurses said they were writing as individuals and not part of a campaign, but their message was unified and unambiguous: Trump “lied and continues to lie about the seriousness of the pandemic.” The nurses said they would be voting for Biden.

As part of Capital & Main’s ongoing coverage of this health crisis, we’ve been interviewing nurses steadily since February. The unanimity of their frustration and concern, both for patients and the health professionals trying to care for them, has been the constant through these months, but a rising tide of animus toward Trump has also been clearly visible.

“He should lead by example, and that means following the proper precautions,” said Balancio, a member of the California Nurses Association. (Disclosure: The union, part of NNU, is a financial supporter of this website.) “Wear a mask. Follow the social distancing. But we don’t see him doing this. It is really undermining the sacrifices of the health care workers, of the essential workers, and the many lives lost to COVID.”

Nurses are a disparate group but in 2020 they’ve arrived at one point of agreement: Donald Trump has actively made a horrific situation even worse.

For Balancio and other nurses, simply lining up adequate PPE was – and remains – a significant challenge, the kind of thing they never thought they’d have to deal with and the product of Trump’s refusal to coalesce a national strategy for procuring equipment. And at hospitals and clinics across the country, nurses and physicians alike have seen patients who are unwilling to acknowledge the disease in their midst.

In Springfield, Mo., a nurse wrote an open letter imploring citizens to take the virus seriously, adding that she and her colleagues had been cursed by patients who did not practice social distancing “because they didn’t believe the virus was real,” and taken calls from angry family members who were sure a relative’s positive test result was somehow false. A doctor in Green Bay, Wisconsin, told the Associated Press that a few patients with COVID symptoms refused to be tested “because they don’t want to become a statistic, or some rhetoric like that.”

Trump embraced the use of hydroxychloroquine to treat the virus; the drug’s emergency authorization later was revoked by the FDA after “serious adverse cardiac events” and other side effects rendered it far too risky. Trump denied – and continues to deny – the efficacy of masks in preventing spread of the disease, despite broad agreement among experts that masks are a critical element of the fight against COVID. After refusing for months to mask up or socially distance from others, Trump was diagnosed with the virus, only to receive an experimental drug cocktail not even approved for public consumption and proclaim it a “cure” for the disease.

In short, Trump’s approach to the science of COVID-19 is a train wreck – but with a nation on board. Doctors, nurses and their organizations know it. The 23,000-member Massachusetts Nurses Association endorsed Biden. In traditionally red-state Texas, anti-Trump sentiment fostered the creation of the grassroots organization Texas Nurses For Biden. And in Trump’s adopted home state of Florida, doctors and nurses in Boca Raton rallied last weekend to raise awareness of early voting. The group’s name: Doctors for Biden.

Nurses in the U.S. are a disparate group, and any attempt to broadly label them – either politically or socially – is doomed to fail. But in 2020, it appears they’ve arrived at one point they can agree on: Donald Trump has made a horrific situation even worse, a running litany of failure that now includes his pointless trashing of Dr. Anthony Fauci, perhaps the single most trusted source of information about the disease in this country.

Eunice Balancio, who aside from normal days off has not taken a break from her nursing duties in San Francisco since the pandemic hit the U.S., feels that much all the way down. “I believe in science,” said Balancio, “and it’s really alarming and heartbreaking for me to think that the highest levels of political leadership are not listening to the experts.”

COVID Casualties: The Jobs That May Never Return