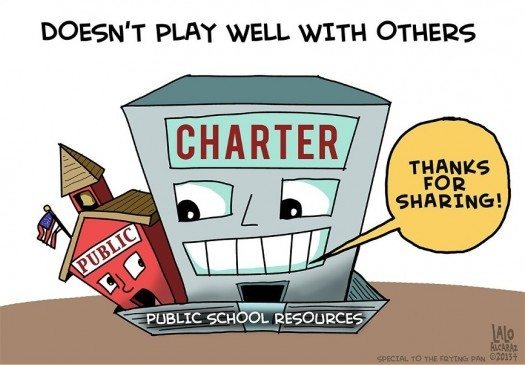 For more than 30 years each, Cheryl Smith-Vincent and Cheryl Ortega have shared a passion for teaching public school in Southern California. Smith-Vincent teaches third grade at Miles Avenue Elementary School in Huntington Park; before retiring, Ortega taught kindergarten at Logan Street Elementary School in Echo Park. Both women have been jolted by experiences with a little-known statewide policy that requires traditional public schools to share their facilities with charter schools. Ortega says she has seen charter-school children warned against greeting non-charter students who attend the same campus. Smith-Vincent reports that she and her students were pushed out of their classroom prior to a round of important student tests – just to accommodate a charter school that needed the space.

“It was extremely disruptive,” Smith-Vincent says of the incident.

The practice of housing a traditional public school and a charter school on the same campus is known as “co-location.” Charters are publicly funded yet independently operated, and are intended to encourage innovation and improve student performance. Under Proposition 39, a school-funding ballot initiative adopted by California voters in 2000, charter schools were given the right to use empty classrooms and share in underutilized public school facilities.

Proponents of the measure, including the California Charter Schools Association (CCSA), claim that it ensures that all public school students, including those enrolled in charter schools, share equally in school district facilities. But critics contend that co-locating siphons key resources from the already-underfunded traditional public schools, depriving students of playground space, library time and other resources. 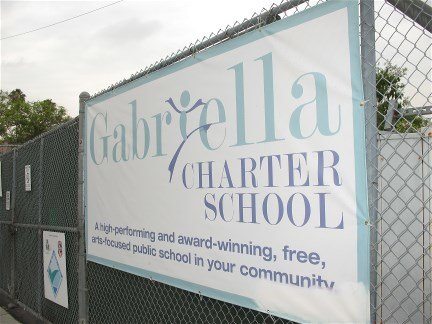 Co-Location Is Everything: Gabriella Charter at Logan Street School.

“One of the difficult things about having a charter school co-located on a district public school campus is that . . . the two schools end up competing for those things that are necessary to provide a quality education for the students,” says Robin Potash, an elementary school teacher and chair of the United Teachers Los Angeles (UTLA) Proposition 39 Committee. “That includes competing for the same students.”

“We’ve collected lots of anecdotal stories [about] the inequitable use of space, disparity of resources, use of school personnel, lack of services for special education students and English-language learners, and the meals that are provided – pre-packaged versus hot gourmet,” Potash continues. Her last point refers to some charter students receiving their lunches from Whole Foods.

Though the practice of co-location is little known to the general public, it is not uncommon in California. Co-locations exist or have been approved in San Francisco, Oakland, San Diego and in Kern County in California’s Central Valley. In the Los Angeles Unified School District (LAUSD) alone, there are 65 co-locations involving traditional public schools and charters, with the district’s charter schools typically requesting space for about 25,000 students to be co-located. 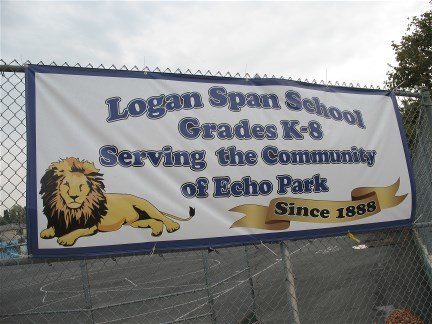 It’s not easy to house two separate schools on the same campus and it can be particularly difficult when the schools have separate and disparate cultures, educational philosophies and traditions. Charter school students sometimes wear uniforms, traditional public school students do not. Sometimes all of the students come from the neighborhood, other times many of the charter’s students are from different parts of Los Angeles. Sometimes the administrators at the schools cooperate; other times they compete. To be sure, some co-locations operate smoothly, with teachers, administrators and parents working together to minimize disruptions, although co-locations have also become controversial in New York City, for similar reasons as in California.

Asked whether the co-locations set up a two-tier system, Soto says that “too often [traditional public schools] try to cordon off students from the charter school . . . Our experience is that charter school students at [co-location] sites tend to get the leftover space,” and that their access to amenities such as bathrooms, playgrounds and cafeterias is an “afterthought.”

News that a charter school is going to be sharing a traditional public school campus often provokes protests and hard feelings. Last year the Silver Lake community became divided after the Citizens of the World Charter was allowed to share the campus of the Micheltorena Elementary School.

“It was terrible,” says Kurt Bier, the father of a student at Micheltorena. “People didn’t want the charter to co-locate because it would draw resources away from students [already] attending Micheltorena. It divided the community. It pitted people against each other.”

The two schools are not scheduled to share space this fall, with Citizens of the World acquiring co-location status at Stoner Avenue Elementary School in Culver City.

This past June, parents and teachers at Boyle Heights’ Lorena Street Elementary School held a protest after it was announced that Extera Public Schools, a charter operation, would be sharing the campus for 2013-2014. The announcement was made five days before the end of the last school year, and protesters said this didn’t leave enough time for rational planning of how to share the space.

Extera was founded by former Hollywood talent agent Tom Strickler and is headed by veteran LAUSD educator Jim Kennedy; one of its stated goals is to introduce children to nature.

Eddie Rivas has taught at Breed Street Elementary School for the past three years, the last two of which was shared with an Extera charter. His fears of co-locations creating two-tiered systems are based on experience.

Rivas’ worries are well-founded, according to Cheryl Ortega.

“I was walking my children up the ramp to go to recess and we were passing by the Gabriella campus,” says Ortega, recalling an incident she witnessed at Logan Elementary when she was subbing at the school not long after her retirement. Logan shares its campus with Gabriella Charter School under a lease agreement.

“One of my little girls called out to a little girl [from the charter]. A teacher told the little girl in the charter to come away and said, ‘We don’t talk to Logan.’ It was as sad as could be. They are telling children they can’t mix or even speak to each other!”

Others say the problems of co-location involve more than snobbery.

“One of the consequences of Proposition 39 is that it prevents thoughtful public planning about how to make use of public space,” Rogers says. “There’s a strong incentive for charter schools to use co-location as a way to get less expensive facilities.”

The CCSA’s Soto doesn’t dispute the charge that charter schools can often get less expensive facilities by co-locating.

“We believe charter school students are entitled to have equitable access to public school facilities,” he says.

Cheryl Smith-Vincent says that construction repairs forced her to move out of her third-grade classroom at Miles Avenue Elementary School in April and relocate to a new room. She says that the repairs had long been needed, but were only scheduled once a decision had been made to give that space to a charter school co-locating at Miles in the fall.

“Our students lost six days of instruction and valuable final preparation time for testing,” Smith-Vincent wrote. “Instead of learning and teaching, teachers and students were moving materials up and down stairs from one building to another . . . It is inconceivable that the week before the administration of the STAR [Standardized Testing and Reporting] test that is so valued by this district, that students and teachers would be uprooted and moved with minimal assistance from the district.”

The letter continued, “Initially we could not understand the urgency . . . It then occurred to us that our original rooms were in the building that is slotted to be given to a charter.”

Bravo replied that he had asked an aide to look into Smith-Vincent’s concerns and that the aide “could not find any connection between the timing of the repairs in question and the selection of Miles for a charter school relocation.”

As Miles Elementary prepares for a co-location with a charter school this fall, Smith-Vincent and other teachers are worried. In a list of talking points titled, “Potential Negative Impact of Charter Co-Location,” they say that playground space is limited; that the custodial staff is currently insufficient for the current school population and that co-location would result in unclean bathrooms and unswept classrooms; that computer labs and library space is already full, and that Miles students will have reduced access to books and library staff;  and that parent volunteers will no longer have full access to the school’s Parent Center.

“It undermines what we can and should be doing for traditional schools,” Smith-Vincent says of the scheduled co-location. “It takes resources away and prevents us from being able to meet all the needs of our students.”

A Harsh Schooling: The War Against Public Education