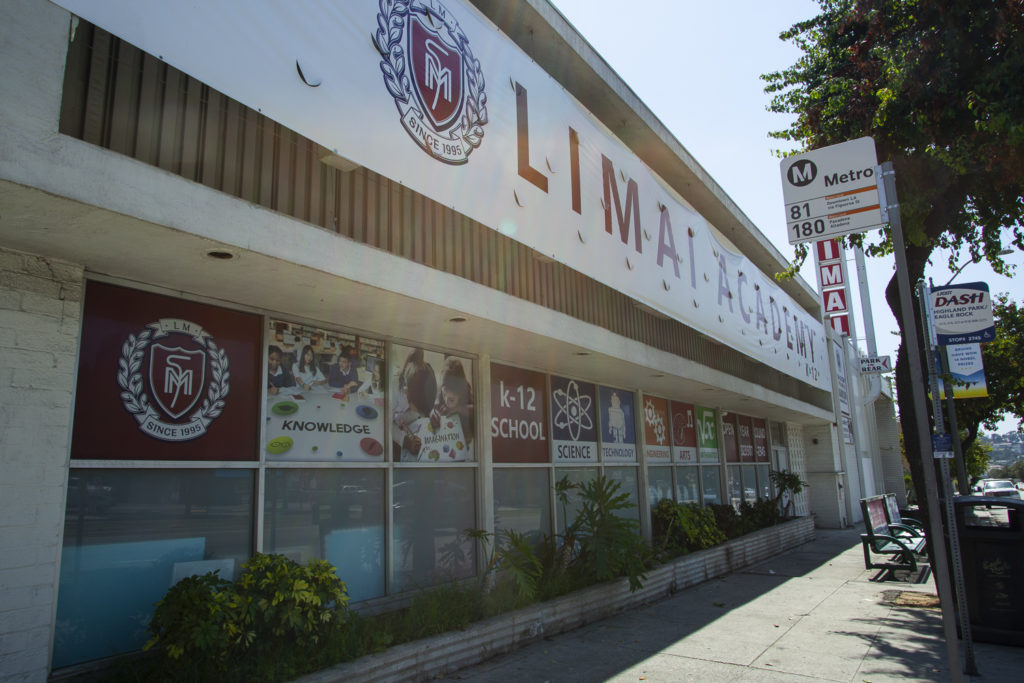 This story is the final part of our “Grading Charter Schools” series examining the impact of privatized education in California. The series is funded by the California School Employees Association, which is a financial supporter of this website.

IN LATE AUGUST OF 2018, Donald and Christine Fergusson were looking forward to the start of their daughter’s second year (second grade) at the International Preparatory Academy. The school, part of the Partnerships to Uplift Communities (PUC Schools), is located in the northeast Los Angeles suburb of Eagle Rock. But three weeks before the start of school, iPrep’s new superintendent, a PUC national board member and the PUC CEO held an emergency meeting where they told parents they would need to bring in more students or the school would close. The Spanish-Mandarin dual immersion school originally aimed to enroll 275 in grades K-2 and 6-8, although the organization told parents it could get by with 200. Panicked parents began distributing fliers in the neighborhood and urging neighbors to register for iPrep immediately.

“They gave us until September 24th to bring in more students,” Donald Fergusson said. “That’s not the parents’ job.”

After scrambling for a few days, the Fergussons decided iPrep was a sinking ship and enrolled their daughter in a Los Angeles Unified School District school with Mandarin immersion, which had been their main reason for choosing iPrep. It turned out to be a good decision. Three days after iPrep opened for its second year of operation — with only 114 students — PUC’s board voted to shut it down.

“Our school was under-enrolled from the very start,” Christine Fergusson said. “They told us it would grow and add one grade per year. I think [the board was] going to close the school anyway. They just strung us along.”

Part of the reason for the closures is an oversaturation of charter schools in some neighborhoods.

A 2017 study by the National Education Association teachers’ union shows that, for charter schools opened in the year 2000, five percent closed within the first year, and after 10 years, one-third had shut their doors. After 13 years, 40 percent of charters were shuttered. (Disclosure: The NEA is a financial supporter of this website.)

Part of the reason for the closures is an oversaturation of charter schools in some neighborhoods. In certain cases, as with PUC iPrep, the charters were granted based on faulty data that overstated the need for a school. The PUC iPrep closure came only months after another Eagle Rock school, Celerity Rolas Charter School, also shuttered due to lack of enrollment. The Celerity charter network had also been under a federal investigation for reckless spending by its CEO. Another school, PUC Santa Rosa Charter Academy, which serves about 160 middle schoolers in Glassell Park, informed LAUSD in May that it was closing at the end of spring term, according to a district spokesperson.

With iPrep, it’s not clear whether another factor was at play: PUC, a nonprofit group of 15 charter schools in Los Angeles, was co-founded by Ref Rodriguez, who resigned from the L.A. Board of Education in July 2018 after pleading guilty to criminal charges related to campaign finance. PUC did not respond to Capital & Main’s request for comments.

When charters close for business reasons they can close as soon as it becomes impossible to make payroll.

CHARTER SCHOOLS ARE PUBLICLY FUNDED and privately managed, and they must apply for renewals from an authorizer designated by the state legislature to regulate and oversee them. Very often this authorizer is the local school district in which they operate. When charters are denied renewal, they usually close after the school year ends. When charters close for business reasons—mainly, because of a student shortfall leading to a budget shortfall—they may shutter as soon as it becomes impossible to make payroll. 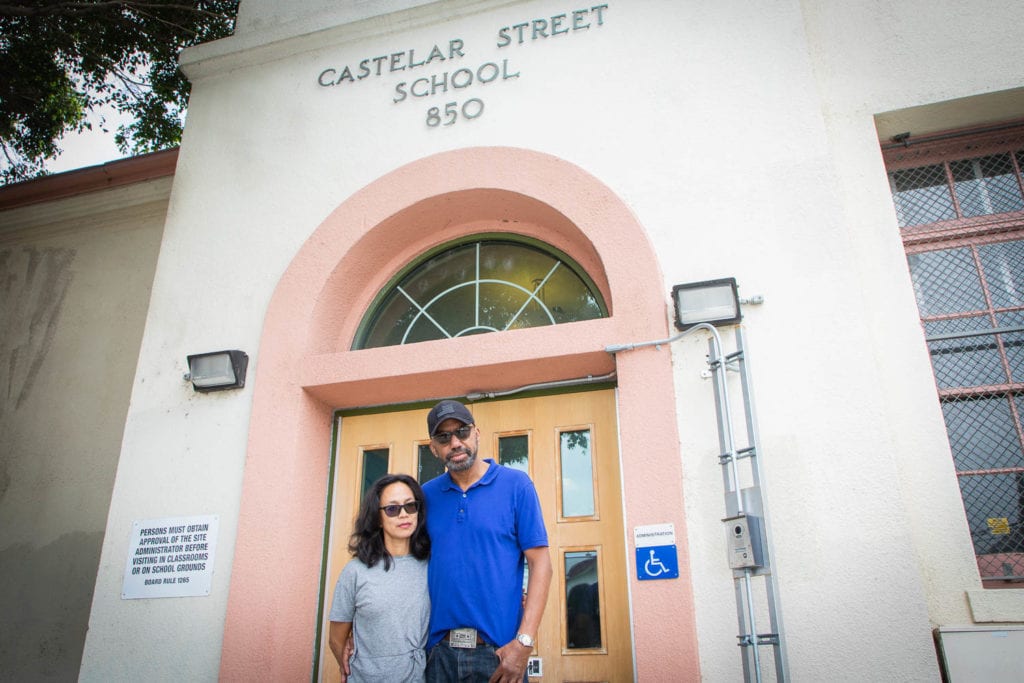 Christine and Donald Fergusson in front of the public school their daughter now attends.

PUC iPrep wasn’t the only charter school to see an abrupt closure in Los Angeles in the past year. In April the board of the L.A. Unified School District cited financial mismanagement while voting not to renew the five-year charter for Summit Preparatory Charter School, which enrolled around 250 students in grades four through eight in the South Park neighborhood. The school had originally planned to end its year on June 7, but due to a deficit of about $310,000, shut down a month early. It ran a GoFundMe page to stay afloat but raised less than $17,000.

Martha Infante Thorpe, a former teacher at L.A. Academy Middle School, where Summit Prep was co-located, wrote an angry post in the Facebook Group “Parents Supporting Teachers” at the news of Summit’s closing:

“Schools such as these offer free uniforms, laptops, and the promise of a superior education to woo parents away from public schools, knowing these humble parents are seeking the best education possible for their children. Nothing, I mean nothing, is worse to me than lying to immigrant parents who have sacrificed so much to get to this country, to give their children a better life. Where will those kids go? What will their families do? BTW, public schools will never close early. And they do not need Go Fund Me’s to stay open.”

Many of these schools closed despite receiving government money and grants. A new report from the Network for Public Education, a public schools advocacy group, shows that 787 California charter schools were awarded grants through the U.S. Department of Education’s (DOE) Charter Schools Program (CSP) between 2006-2014. The report also showed that at least 297 of those charter schools were closed or never opened at all. “In total, $103,467,332.00 were awarded to California charter schools during those years that either never opened or shut down,” the report said.

“Sometimes you see charter schools open in August and closing by January or even October,” said Carol Burris, the network’s executive director.

No matter when a school closes, it’s disruptive to students, parents, and to the neighboring schools which have to take the students, says Burris. She added that parents considering charter schools are forced to roll the dice given the lack of fiscal transparency of the companies that manage most of them. “But parents can look up the names on the boards of these schools to see if they’ve been associated with failing schools. Many times these board members turn up again and again in new schools.”

THE CALIFORNIA CHARTER SCHOOLS ASSOCIATION did not respond to multiple requests for comments, nor did PUC Schools or national charter school organizations. The charter school movement has long touted the schools’ flexibility, agility and ability to address the needs of students in a way that district schools can’t, and that case is made in videos like this one from the National Alliance for Public Charter schools. “Choice” is a big selling point, and many charter schools do offer specialized programs, such as language immersion, music- or science-specific focuses that aren’t available in other public schools.

“Sometimes you see charter schools open in August and closing by January or even October.”

One charter school operator had some harsh words for schools that close abruptly. Hattie Mitchell, who, with her husband Brett, founded Crete Academy charter school to serve high-needs students—including many who are homeless— in South Los Angeles, pointed out that charter schools should have a process for closing.

“At the end of the charter petition they give you a section to write a detailed plan for closure,” she told Capital & Main. “Also, you know a year in advance if your application to continue your charter has been denied. You have a whole year to prepare for closure.”

Mitchell noted that a nearby charter school, Apple Academy, closed in 2017 and sent her approximately 30 students. “They did it right. They started meeting with parents 18 months before the closure, to help them find an appropriate school. They even helped teachers look for employment.”

Traditional district schools do close as well, though that’s typically due to declining enrollment or poor academic performance rather than financial problems. And because of that, the writing is usually on the wall months in advance. Districts will consolidate schools or make plans to accommodate students in other schools, with months — not weeks or days — warning.

It isn’t just parents of charter school students, and their teachers, who are left reeling when schools closes. Other district schools in the community are affected as well. When Burris was a high school principal, she found that even a small, sudden influx of students from failed charter schools could be disruptive. “We started planning for the next school year in January. You have to carefully look at enrollment, and how many teachers you’ll need, exactly how many classes you’ll offer, even how many books you’ll have to buy.”

“There does not seem to be any provision in place for dealing with the mid-year closure of a charter school.”

RICK BAGLEY, SUPERINTENDENT OF THE ROSS VALLEY SCHOOL DISTRICT in Marin County, had a close brush with a school closure in December 2017. “We had no idea what grade levels these students were in, what part of the district they might live in and, of course, we had no idea how many additional staff we’d need to accommodate this possible influx of children,” Bagley said. “We had zero information about their academic, social and emotional functioning. Even if we had more specific information, finding, recruiting and hiring teachers mid-year would have been difficult at best.”

In the end, the majority of students from the closed school enrolled at another charter school, saving the district some big headaches. “The point is that there does not seem to be any provision in place for dealing with the mid-year closure of a charter school,” Bagley said.

But even with advance warning closures can be disruptive for parents, kids, teachers and staff. Until the end of May, Dulce Maria Caudillo taught sixth, seventh and eighth grade at Roots International, a small public school in Oakland. She was notified four months before the end of the 2018-2019 school year that Roots would close due to low enrollment and low test scores.

“That was still not enough planning time and the situation has been messy,” Caudillo said. “I have been stressed out non-stop since [the announcement].” Caudillo added that it was up to her and other teachers to find local district schools for its kids, though by late June most were enrolled for the upcoming school year.

Almost one year later, back in Eagle Rock the Fergussons say they still feel burned by the experience at iPrep. “Our daughter loved the school,” Donald said. “But this [closure] has really turned us against charter schools.”

The Cost of Collapsing Charter Schools