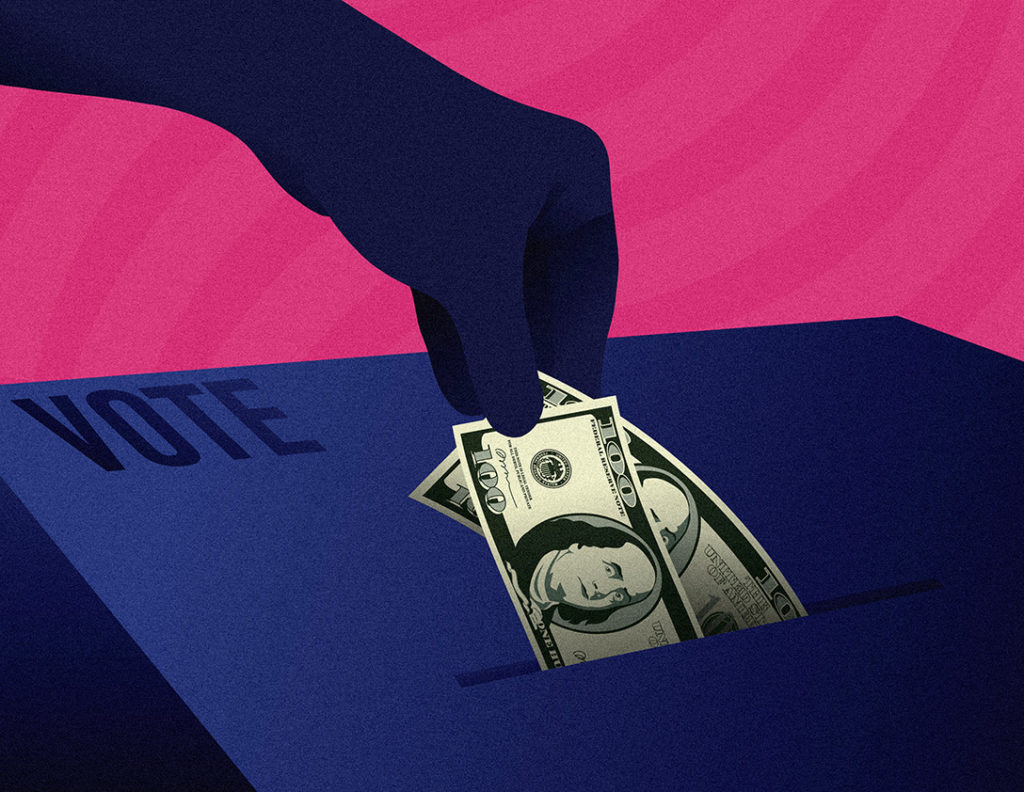 How changes to California’s Proposition 13 could reduce inequality.

Story Updated Nov. 25: An attorney and assistant treasurer for the now-defunct No on Prop 10 campaign committee, which defeated last year’s California rent control measure, denied that the committee forwarded $1 million in contributions it received this year from the Irvine Company to a current effort to oppose a split-roll initiative. Ashlee N. Titus, who also is the assistant treasurer for the anti-split roll Californians to Stop Higher Property Taxes committee, said there “is simply no nexus whatsoever between the payments from No on Prop 10 and the work these consultants” from Meridian Pacific, Inc., and Apex Strategies “are now doing on the split-roll measure.”

Headed by the richest real estate man in the United States, the Irvine Company has provided $1 million in early funding to defeat California’s Schools and Communities First campaign, a 2020 split-roll property tax initiative that would eliminate the benefits big landholders have enjoyed since the passage of Proposition 13, the landmark property tax-slashing measure approved by the state’s voters in 1978.

Irvine is one of California’s largest commercial property businesses, owning 65,000 apartments in 125 mostly coastal locations, as well as 125 commercial buildings and 40 shopping centers, including the Fashion Island complex in Newport Beach, where the company is headquartered. As such, it has saved untold millions of dollars in the 41 years since the passage of Proposition 13, which was sold to voters primarily on its benefits for homeowners. And Irvine stands to lose a similarly significant if undetermined sum in the decades to come if the split-roll measure wins, even though the proposal has been written to exempt residential holdings such as Irvine’s apartment empire.

The company’s fight to preserve the commercial property protections of Proposition 13 presents a case study in how corporate and personal wealth can exacerbate the economic inequality that began to widen in America about the same time that the California measure kick-started the nationwide tax revolt. (Disclosure: Several unions belonging to the Schools and Community First coalition, which is funding the split-roll measure, are financial supporters of this website.)

While most of the criticism of wealth and income inequality has focused on policies and tax-avoidance practices that have added to the riches of Wall Street investors, corporate executives, hedge fund managers and Big Tech, there is little question that Proposition 13’s inclusion of large commercial businesses has contributed to the chasm between the top one percent and everybody else – and that a split property tax roll would figure to change the equation.

Split-roll proponents say that if it succeeds at the ballot box, the updated, market-rate reassessments on big companies like Irvine that have benefited from Proposition 13 would provide anywhere from $7 billion to $11 billion in new funding for schools and local governments.

“A third of that funding would go to schools, and we know that education makes a huge difference [in incomes],” said Chris Benner, director of the Everett Program for Technology and Social Change at the University of California, Santa Cruz,  and co-author of a 2018 study of how a split roll would affect the economy. “Before Proposition 13, we were in the top tier of quality public schools in the country. Now we’re in the bottom tier. A great reinvestment in public schools would make a huge difference. It would also go for basic public services — so, to the extent that having decent public services support poor people more than upper-income earners, it could impact wealth inequality.”

Increasing taxes on big property owners to pay for infrastructure improvements also would amount to a wealth shift in favor of the normal-incomed as well as the poor, to the extent that it could create higher-paying jobs and induce cities to ease off the “fiscalization” of their land-use decisions, Benner said. Since Proposition 13, local governments have sought to make up for their loss of property tax receipts by approving retail developments that pump up sales-tax receipts, instead of using the land for its job-producing “best and highest purposes.”

As Irvine opens its vaults to kill split-roll, campaign finance experts say that the company’s spending presents another example of big-money political spending that over the past 40 years has accompanied and fostered the growing income and wealth inequality in the United States, where the top micro-percentages of the population have accumulated more and more of the nation’s bounty.

“I don’t think there is any question about the connection,” said Ann Ravel, the former chair of the state’s Fair Political Practices Commission and a onetime Federal Election Commission member.

Ravel cited studies that found that at the federal level, more than 90 percent of all laws, policies and other regulations “reflect the interests of the very wealthy and also corporate interests,” and that the lawmakers who pass and approve them “are beholden to those interests.”

Paraphrasing Nobel Prize-winning economist Joseph Stiglitz, Ravel said, “There will never be any change” in the concentration of wealth in the United States “until the campaign finance system changes.”

Derek Cressman, a longtime advocate for campaign finance reform and a former official with Common Cause and the U.S. Public Interest Research Group, said he found the connection between political money and wealth, and income inequality “clear and strong.”

“People with wealth for centuries have found ways of engineering political structures aimed at protecting and expanding their wealth,” Cressman said. “It is not just some accident of marketplace capitalism, but a very concentrated and very well-thought out strategy by wealthy interests to maintain and deepen their wealth.”

Craig Holman, a Washington, D.C., a lobbyist for Public Citizen specializing in money-in-politics issues, noted that on the national level, spending on federal elections has increased from $1.4 billion in 1998 to $6 billion in 2018, and is projected to go as high as $10 billion in 2020, with more and more of the money coming from fewer and fewer sources.

With regard to the pending split-roll measure, Bren’s Irvine Company early this year gave a million dollars in campaign cash to the No on Prop 10 committee that ran last year’s anti-rent control campaign, even though the campaign had been won by landlord interests on Election Day, 2018. The No on Prop 10 committee then forwarded $1 million to two political firms that are working against the split-roll measure, Meridian Pacific, Inc., and Apex Strategies. The latter firm is headed by Tony Russo, the former group senior vice president at the Irvine Company who now runs his own political consulting business in Sacramento.

The No on Prop 10 committee paid $150 in expenses to the California Secretary of State’s Office, gave $335,000 it had left over to the California Business Roundtable and then it went out of business, according to the state campaign finance records.

Interestingly, the Irvine Co. last year did not contribute any money to the No on Prop 10 committee but gave $4 million to the California Republican Party – which then made more than $5 million in nonmonetary contributions to No on Prop 10, including more than $3.6 million it spent on services provided by Meridian Pacific.

As of October, the Irvine Co. has spent more than more than $15 million on political campaigns in California over the past 18 years, according to an analysis conducted for Capital & Main by MapLight, the nonpartisan Berkeley nonprofit that tracks money in politics with a focus on identifying outsized influencers. Irvine directed $12.8 million of its spending in large chunks to campaign committees such as the state GOP, the California Business Roundtable, the California Apartment Association, the pro-Republican New Majority PAC and, most recently, to the post-election remnants of the No on Prop 10 committee.

In direct contributions that Irvine made in its own name over the years to statewide ballot measures, the company’s campaign money mostly reflected the interests of a mainstream conservative political player – favoring things like term limits for legislators, opposing a parcel tax for schools that would have cost it millions and opposing a 2010 initiative that allowed the Legislature to pass a budget by a majority vote.

Irvine has shown an edgier side, however, in contributions that it filters through other donor committees such as the California Republican Party and the No on Prop 10 campaign, as it has during the early movements on the split-roll campaign. In 2005, Irvine distributed more than $400,000 to five committees that spent big on former Gov. Arnold Schwarzenegger’s failed special election ballot measures, according to the California secretary of state’s records. Schwarzenegger’s defeated initiatives would have defunded public employee unions, made it easier to fire school teachers and put a cap on state spending, with dire consequences for education spending.

The same year, the SBAC took in $11 million in undisclosed out-of-state money that tracked back to a Koch brothers-affiliated organization in Arizona for the committee’s campaign against the unions. The state Fair Political Practices Commission investigated the spending and later fined two Koch organizations a record $1 million between the two of them to settle the case. Russo, the former Irvine senior VP, played a major role in the scheme, helping to raise money that went to a Virginia nonprofit that gave some of it to the Arizona group that, in turn, contributed the $11 million to the committee SBAC set up on behalf of Proposition 32.

“I’ve still got the good fortune to have been the only person to have gone after the Koch brothers and succeeded,” said Ravel, who chaired the FPPC through the conclusion of the case.

Russo declined to be interviewed for this story. A Russo aide directed Capital & Main to a spokesperson with Meridian Pacific, who declined to answer questions about the Irvine Company or Russo. Irvine Company spokesman Scott Starkey did not return phone messages or respond to email.

There’s nothing illegal about donors such as Irvine giving money to one committee, which then directs the cash to another payee. Asked why they do it, Cressman, the campaign finance reform advocate, said that sometimes “it would be politically disadvantageous for voters to know who was funding a message,” or that it would be “counterproductive to the message they are trying to send.”

With the petition-gathering still underway, it’s not as if split-roll advocates will be going into the campaign unarmed. The Schools and Communities First coalition so far has raised more than $7 million, including $1.6 million from the Chan Zuckerberg Advocacy nonprofit, more than $1.4 million from teachers’ unions, another $1 million from the San Francisco Foundation and $650,000 from the Service Employees International Union. Almost all of the money has gone toward petition-gathering, with half of it spent on a scrapped first effort that campaign officials rewrote to exclude smaller businesses and others from the measure’s coverage.

The opponents’ Californians to Stop Higher Property Taxes campaign, meanwhile, is just beginning to gather steam. It is sponsored, among others, by some of the Irvine Company’s long-time favored recipient committees, such as the California Business Properties ($350,000 from Irvine over the past 18 years), the California Chamber of Commerce ($376,500) and the Howard Jarvis Taxpayers Association ($305,000). By the time all the contributions are counted, that first million from the Irvine Company may not amount to much more than a down payment, no matter how its campaign money finds its way into the action.

MapLight contributed research to this story.