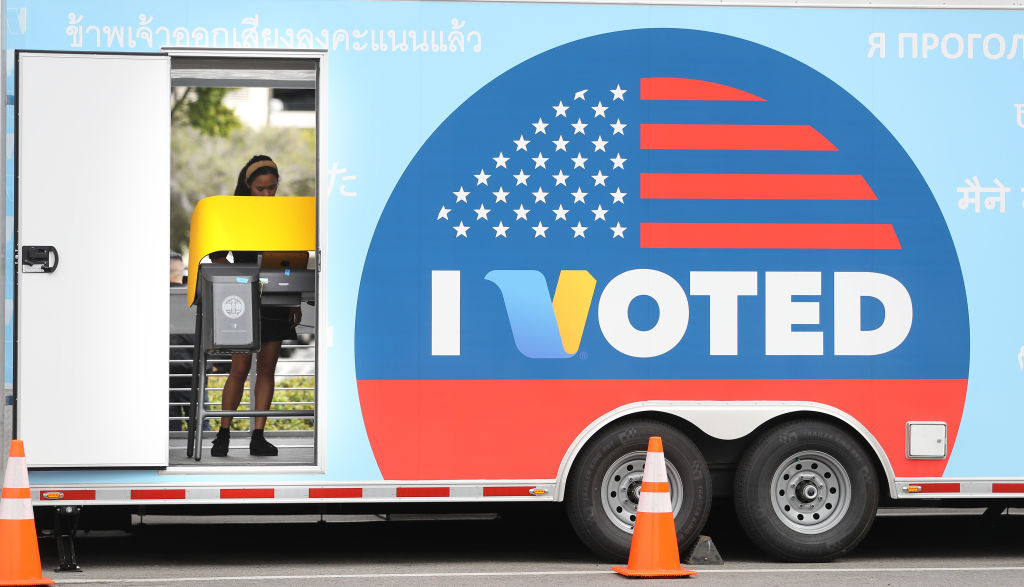 What Will California’s Rising Voters Decide?

It was a Wednesday afternoon in mid-February, and at Los Angeles Trade-Technical College, the computer club was having its first meeting of the semester. In less than two weeks California would vote in its Democratic primary, and so many clipboard holders were descending on the working-class school to talk about issues that computer club members were reminded of an inside joke familiar to students at the college.

“The joke is that Trade-Tech students will sign anything” just to get on with their day, says Musfequr Rahman, an affable 28-year-old who is president of the campus computer club. A self-described nerd, he goes by Mo. Born in Bangladesh, he and his family moved to the U.S. before he entered kindergarten, and he grew up mostly in South L.A.

More than 5 million voters not registered to a party are eligible to participate in the March 3 California Democratic primary, making them the second largest cohort of voters in the state at nearly 26 percent — ahead of Republicans, who comprise just 24 percent. Mo Rahman and fellow computer club members Abraham Aguayo, 27, of Boyle Heights, and Steve Samayoa, 28, of Cypress Park, are among the group of voters registered as “no party affiliation.”

Young men like these are being called the “X factor” in the California primary. And yes, independents are more likely to be men, according to the Pew Research Center. Since the massive number of non-partisans helped flip seven long-held Republican House seats in California to the Democrats in the midterms, the hope of many is that by flexing their muscles in 2020 they will help oust Donald Trump from the White House.

Capital & Main spent a few days in February at L.A. Trade-Tech interviewing the type of independent voter that Democratic candidates have been courting in the months leading up to the primary. I found a plurality for Senator Bernie Sanders on a campus otherwise largely undecided on the crowded field of candidates. Indeed, the social progressivism and political disaffection that combine to define many independent voters seemed equally in evidence whether a student was registered as a Democrat or with “no party preference.”

Like any club, computer club members disagree on politics.

Andrew Yang was once a favorite of Mo’s. Since the Silicon Valley entrepreneur dropped out of the race on Feb. 11, Mo has been studying the rest of the field; he says he likes Tom Steyer. Steve Samayoa likes Bernie Sanders, but he is intrigued by Michael Bloomberg because he thinks America needs more forward-thinking tech entrepreneurs and says he’s worried about getting a tech-related job in his field of study. “I want a way to apply my degree without having to work at Starbucks,” he said. Abraham Aguayo worries that simmering political conflicts with China and Iran could escalate to war, but he doesn’t support any of the candidates and plans to sit out the primary. “There’s too many candidates,” he said. “And they’re all a different shade of the same color.”

For a two-year community college, L.A. Trade-Tech has become an established destination for Democratic presidential hopefuls. In 2008, then presidential candidate Barack Obama held a town hall on campus that drew an estimated 2,000 people. Six years later, hundreds lined up for several hours to hear President Obama deliver a speech touting the economy. Organizers brought bleachers in to accommodate the capacity crowd of 1,500.

In November, when former Vice President Joe Biden held his first California rally of the 2020 campaign at L.A. Trade-Tech, there was a simple stage, no bleachers, and a crowd estimated at 450 people.

Students too young to vote in 2014 referred to the momentous occasion of the Obama rally that year as if they were there. Others said they voted for Obama in 2012 at the urging of their immigrant parents, and many more said they voted for Hillary Clinton in 2016. Few, however, said they planned to vote for Biden in the primary. “Biden seems like he’s fallen out of favor,” Samayoa said.

One exception was Angelique Young, a 27-year-old from South L.A. studying to be a special needs teacher. She said she is leaning towards Biden “because he was Obama’s VP.”

The student body of L.A. Trade-Tech is in many ways a cross section of the blue-collar voter bloc that helped put Obama in the White House in 2008, and on which Biden is counting for a respectable showing in California. Two-thirds of the roughly 18,000 students are between the ages of 18 and 35. Hispanics comprise more than 70% of students and African-Americans nearly 8% — compared to 19% Hispanics and 3% African-Americans at UCLA. Immigrants and the American-born sons and daughters of immigrants are a fixture of student life at the urban community college.

“There are a lot of first generation students,” said Dr. Bradley Vaden, a political science instructor at the college. “Most of them feel disassociated from the process itself.”

The most common issues facing these voters included college debt, housing, health care, and their future work prospects. Stephen Ayala, a 22-year-old from Exposition Park whose parents are from El Salvador, likes Sanders and Warren and says there is a “high possibility” that Sanders will get his vote. Ilona, a 39-year-old nursing student who did not give her last name out of concern for her privacy, says she is Bernie or bust. “I’m more Green-oriented, but because of the way the system is set up I’m going to vote for a Democrat and it’s going to be Bernie.”

Robert Graham, 24, of Crenshaw, studies behavioral sciences and wants to be a therapist. The most important issues to him are affordable housing, poverty, and getting the homeless off the streets. “I would vote for Warren because she’s for relieving student debt and increasing financial aid funding for students,” he said.

Cruz was working at the reception desk at the Veterans Student Center, an airy gathering spot for many of the nearly 350 military service members who attend the two-year college. A young guy with close-cropped hair came in asking Cruz how he can activate his tuition benefits under the GI Bill.

“Pete Buttigieg can’t beat Trump, I know that,” said Sheldon Thompson, a 63-year-old Air Force service member who was among a group of African-American veterans hanging out in the lounge. “I’m with Bloomberg. He created jobs, and he had a good record as mayor of New York,” said Thompson, who is studying computer applications. “Tom Steyer is good, too. But all he talks about is global warming.”

Patrick Perkins, 31, of Inglewood, is a Marine Corps veteran who served in Iraq, graduated from LATTC and now works as a tutor at the center. He says that reading about Bloomberg’s controversial stop and frisk policy in New York dampened his enthusiasm. “[But] I still think he’s a better alternative than what we have currently,” he said.

Back at the meeting of the LATTC computer club, members discussed the results of a recent online poll asking whom they believe will be the 2020 Democratic nominee. Five of seven members believe it will be Sanders.  “Bernie has name recognition,” said Emanuel Renderos, 20, of downtown L.A., who cannot vote in the California primary because he is registered as a Republican.

Mo Rahman agrees. “Bernie is probably the most popular candidate,” he said, “and if he doesn’t get the nomination it’s going to spell big trouble for the Democrats right now. But a lot of people are scared of Bernie because he’s so different.” Count Rahman among the skeptics. He called the promises by both Sanders and Warren to make college education free and forgive student loan debt “too good to be true.”

Rahman, who works part time at a South L.A. grocery store, attended the Biden rally in November and said the low turnout and energy struck him as an omen. The independent voter is looking at a few other contenders he hadn’t considered, like Buttigieg, Steyer, and Tulsi Gabbard.

“I’m trying to continue to inform myself of their policies and how many of their promises can they actually keep,” he said. “I want a candidate that makes friends with our allies and understands compromise.”