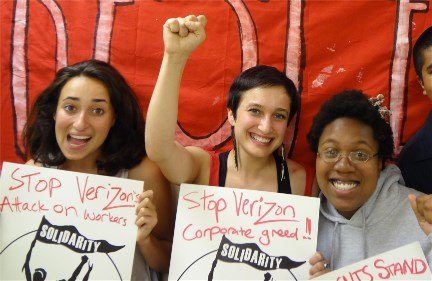 You’ve probably heard it from a colleague, or maybe from a friend or family member:

“Kids these days… they’re just too ambivalent to care about labor unions or workers’ rights.”

But as it turns out, that’s just not true. Young people are actually big fans of unions. Fully 61 percent of young people view labor unions favorably – and that’s more than 10 points higher than the national average, according to a new Pew poll. In fact, young people are the only age group that views unions more favorably than they view corporations.

But despite the overwhelming support young people have for unions, they’re far less likely to belong to one. Harold Meyerson writes in the American Prospect:

The irony for unions —and in theory, the opportunity—is that the youngest Americans are the least unionized. The latest data from the Bureau of Labor Statistics show that labor force participants under 25 have a unionization rate of 4.2 percent … So wherever young people got their disproportionately favorable impression of unions, it didn’t come from their personal exposure to them. Then again, young people in the early 1930s—a time when union membership collapsed, along with the economy in general—didn’t have much personal exposure to unions either, yet they became the most pro-union generation in American history. What both these generations have in common is a far greater skepticism about the economy in general and a much stronger belief that the economy is rigged to ordinary workers’ disadvantage.

Just ask any twenty-something, “How’s work/the job search going?” and you’ll hear this belief expressed first-hand in their responses; “The deck is stacked against us!” or “I guess taking a lousy low-wage job is better than no job,” or perhaps “I bet our parents never had it this bad.”

And they’re right. Young people entering the workforce today are laden with more student debt than ever – so much so that many wind up moving back in with their parents because they can’t afford to live on their own. Job prospects for workforce newcomers are limited at best, and thanks to decades of corporate special interests chipping away at workplace rights, busting unions and bashing labor, the jobs that are out there for young workers rarely come with a living wage and decent benefits, let alone a union card. Choosing between taking a low-paying job or accruing even more debt to earn an advanced degree on the hopes that it will increase opportunities is the cold, hard reality for far too many young people.

But there’s another option. By connecting with and engaging more young people in and around the labor movement, we can improve wages and working conditions for a whole generation, turn around our economy AND save the vital movement that brought us the weekend, the minimum wage and child labor laws (just to name a few of the labor-backed policies we often take for granted). If we can lift up younger workers, we can lift up ALL workers, and one day, we might be able to once again relish the idea that our kids will have the same shot at the American Dream that our parents and grandparents had.

I’m one of the rare (and exceptionally fortunate) young people who grew up in a union household and managed to secure a union job early in life. My dad, an Operating Engineer, taught me about the value of unions at a young age, and I was one of the few kids in school who understood unions to be the sole counterbalance to corporate greed and excess that’s only gotten worse as we’ve grown up. Whether they’re food service workers or PhD candidates, my generation recognizes that corporations are out of control, and something has got to change.

The labor movement can be that change. We can turn the tables on corporate greed. We can expand our ranks to nontraditional organizing efforts. We can connect with young people in our communities, and educate them about what unions have to offer for them. We can inspire them to fight for their rights. And we can make space for them in our unions, councils, organizations and campaigns – because if we give them an outlet where they and their peers can feel comfortable getting involved, we can groom new activists and future leaders, and that’s the only way we can restore and grow the labor movement.

Our generation has the unique opportunity to bridge the gap between union workers and nonunion workers – or as I like to say, current union workers and future (or aspiring) union workers. But if we do nothing, we can all but guarantee that unions will go extinct in our lifetime. And while I can’t speak for all young people, I personally know that I want to make sure unions are still around for my kids and grandkids.

Young people need unions, and unions need young people. That’s why I’m thrilled to be spear-heading a new movement in California aimed at engaging, energizing and mobilizing more young people in and around the fight for workers’ rights. We’re about to launch an aggressive outreach effort to help unions and labor groups cultivate organizing, civic and educational programs specific to young workers, regardless as to whether they’re in a union or not.

Now is the time to build a more inclusive and powerful movement for the “now” generation, but we can’t do it without your help. If you’re interested in getting involved by starting a young worker program at your union, send me an email.