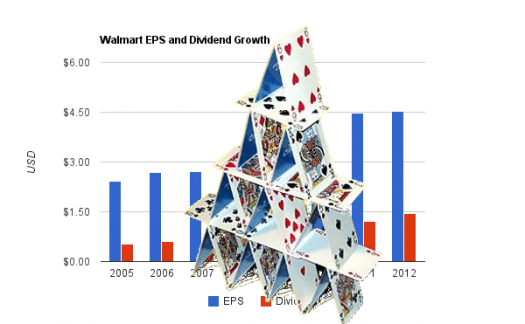 This Walmart low-prices, low-wages thing isn’t working out so well — even for Walmart.

The company released its quarterly numbers last week, and they weren’t pretty. Same-store sales declined by 0.3 percent, and the company lowered its earnings-per-share forecast. Bad news wasn’t limited to Walmart. At the low end of the retail consumer market, Kohl’s reported similarly bad news; Macy’s, a little higher up the food chain, lowered its earnings forecast as well.

While Americans with money are boosting both the housing and auto markets, the growing number of Americans without are curtailing their shopping. As Douglas McMillon, chief executive of Walmart International, noted last week, “When we do see good things in the economy, sometimes they don’t immediately flow through to a paycheck. Remember how the average American lives.”

And who signs more paychecks than any private-sector employer on the planet? Ah, yes: Walmart.

But let’s not single out the Bentonville, Arkansas behemoth unduly. The good things in the economy aren’t flowing through to paychecks anyplace else in the U.S. economy, either. Corporate profits — which comprise a larger share of the nation’s economy than at any time since World War II — are being plowed into share buybacks or dividend payments, but decidedly not into wage increases. Worse yet, a steadily higher share of the jobs created in the current “recovery” are low-wage positions in retail and restaurants, while wages for the new generation of auto workers are half that of their predecessors.

The United States leads the industrial world in the percentage of its jobs that are low-wage. Fully 25 percent of the workforce makes less than two-thirds of the nation’s median wage — ahead of Britain (where just 21 percent hold such low-paying jobs), Germany (20 percent) and Japan (15 percent). This is not what the “We’re Number One!” chant presumably refers to, but it could.

This is not the first time U.S. mass retailers have faced the problem of under-consumption. In the 1920s, as U.S. cities swelled, the low incomes of the new urban consumers posed a constant challenge to merchants. In contrast to today’s Walton family heirs, however, some of those merchants realized that the solution was to raise workers’ incomes.

In the ’20s, Edward Filene, whose family owned both its eponymous chain and the Federated Department stores, called for the establishment of a minimum wage, unemployment insurance, a five-day workweek, legalized unions and cooperatives where people could do their banking. (He helped establish some of the first banking co-ops himself.) The Straus family, which owned Macy’s, and shoe-magnate Milton Florsheim endorsed similar measures and were among the more prominent business leaders who supported Franklin Roosevelt’s New Deal. They were well compensated for their clear understanding of how to make an economy thrive: During the 30 years of broadly shared prosperity that the New Deal reforms made possible, department stores catering to the vast middle class were a smashing success.

Today’s economy, alas, has increasingly more in common with the pre-New Deal era than with the more robust and egalitarian mid-20th century. The mass market has fragmented into a bustling luxury trade and a stumbling low-income sector. As in the 1920s, wage increases are few and far between. And with the economy disproportionately generating low-wage jobs as middle-income positions dwindle, it’s time to ask why the Waltons can’t see what the Filenes and the Strauses saw fully 90 years ago: That a nation whose workers have inadequate incomes and no bargaining power isn’t likely to be one where mass retailers can thrive.

Those workers, meanwhile, are growing restless. After a series of one-day walk-outs in a number of cities, a coalition of fast-food workers has announced a nationwide day of walk-outs on Aug. 29. They are asking for a minimum wage of $15 an hour — not that much when you consider that 70 percent of today’s fast-food workers are adults and that $15 an hour comes to just $30,000 a year.

As in the ’20s, these nonunion workers probably can’t persuade their employers to give them a raise. Yet that doesn’t mean they can’t prevail. Writing in 1924, Filene predicted that if workers “cannot settle their issues inside industry by industrial methods, they will go outside industry and settle them by political methods.” States (and some cities) have the authority to set their own minimum wage standards. As long as employers like the Waltons remain so indefatigably dense, that may be the only way workers can win adequate pay — and the only way mass retailers can return to health.

Walmart Gets Ready for Labor Day With Arrests

The L.A.Times Misses the Bigger Picture