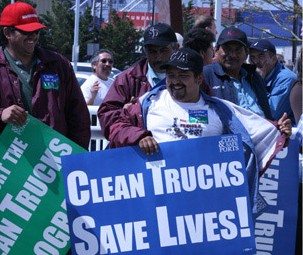 For years, NRDC, working with allies in labor, have disproved the myth that environmental protection and good jobs can’t co-exist. We are not alone in this: NRDC, Sierra Club, National Wildlife Federation and Union of Concerned Scientists are members of the BlueGreen Alliance, which also includes the Steelworkers, United Auto Workers, SEIU and other national and international unions representing tens of thousands of members.

NRDC has focused particularly on promoting the new clean energy economy which brings with it good-paying, local jobs in the manufacturing, construction and service sectors. We have seen this in California where the clean energy sector is growing faster than any other sector, accounting for over 90,000 in Los Angeles area alone. This is apparently news to the Los Angeles Times. In a misguided editorial on the recent Ninth Circuit ruling in the Port of Los Angeles clean trucks case, the Times wrote: “There’s nothing wrong with trying to enhance well-paying jobs in L.A., but that has no connection with improving the environment.”

Oh really? Here are a few examples from the Southern California area, all of which the Times reported on.

These projects, and many others around the state, give lie to the claim that good jobs and environmental protection are inconsistent. The Times knows this; they report on it every week. It’s time to stop feeding into unsubstantiated rhetoric that does nothing but give cover to polluting industries that do not want to clean up their act or move California forward.