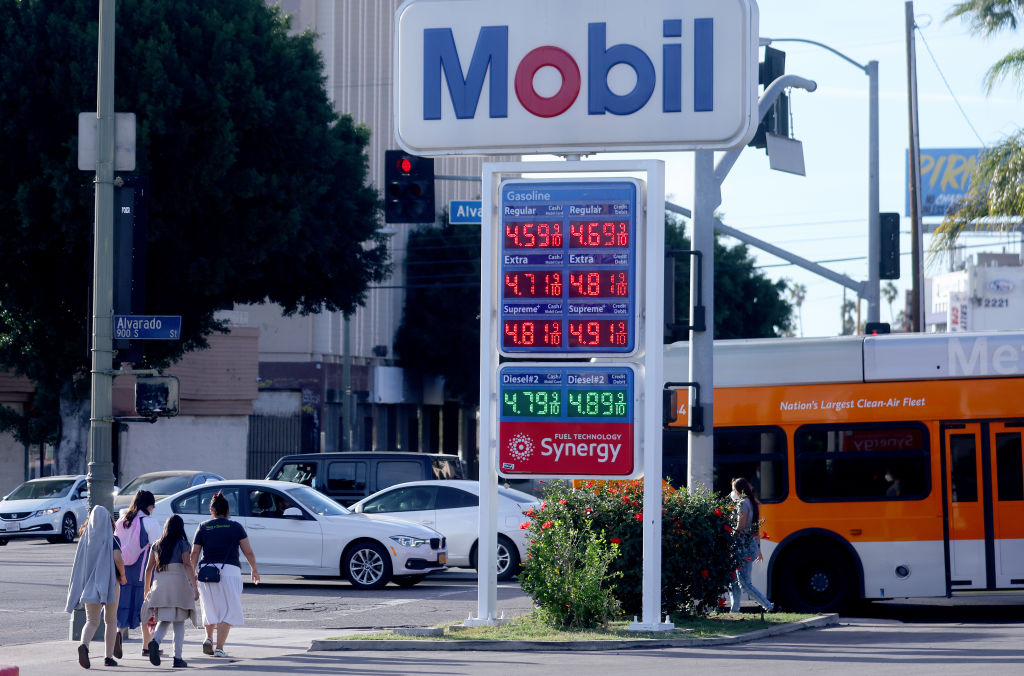 When I met Amparo Ramirez in March of 2020, our conversation was very much of the moment. The pandemic was in its early days and the fear factor was high, but Ramirez, who works in food service at the Los Angeles International Airport, was explaining that even if she felt ill, she would most likely report for her shift — and so would her colleagues.

“If you miss work, they look at you differently,” she told me through a translator, speaking of her supervisors at LSG Sky Chefs, one of the world’s largest airline food catering services. “I cannot afford to miss.”

Ramirez was making $15.25 per hour at the time. Two years later, having survived a protracted layoff by using stimulus and unemployment money to pay the rent on her apartment, she is back on the job. Not only that, but her wages with Sky Chefs have risen to $17 an hour, an increase of nearly 12%.

Is she feeling relieved?

“I am incredibly worried, and I really don’t feel prepared,” Ramirez, 50, said last week. “I’ve been thinking that I might have to try to get a second job. I’m living at the margin.”

Among the more pernicious aspects of inflation is that, although it happens to everyone at the same time, it doesn’t affect everyone equally. Higher-income individuals and families may tighten their belts. But at the end of the economic scale where Ramirez lives, the working poor get hammered by prices spiking on the basic necessities of life — food, shelter, power, fuel — with little choice but to pay.

Economists have long recognized this effect, known as inflation inequality. Now, in the midst of the worst inflationary cycle in 40 years, California is seeing it play out in real time. Despite wages rising significantly as understaffed companies try to lure people back to work (or into the job market at all), most lower-income families have realized virtually no gain in purchasing power.

“As of last December, you needed to have seen about an 8% increase in wages over the past two years to keep up with inflation, and that was before anything that has happened here in 2022,” said Sarah Bohn, a senior fellow at the Public Policy Institute of California.

The PPIC’s research shows that since December of 2020, wages in California have increased 5% overall — but when inflation is factored in, they’ve actually decreased by 2%. “It became obvious that we had to look at this, because it really impacts so many people in the state, particularly the lower-wage earners,” Bohn said.

The Consumer Price Index shows that food costs shot up nearly 8% over a 12-month period that ended in February, the latest month on record.

It’s a huge number of people. By most estimates, about a third of California’s labor force, roughly 6 million workers, earns less than $15 an hour, a figure that has held fairly steady over the past two decades. Some of the state’s most potent economic engines, including agriculture, manufacturing and the leisure/hospitality industry, are built on low wage jobs.

These are full-time employees, many of them with years of service and families to support. Ramirez, a native of Sinaloa, Mexico, has worked in the U.S. for more than 30 years and is a lawful permanent resident here. She raised her daughter as a single parent, paying $1,700 a month for their one-bedroom unit in Culver City — a rent that did not rise over the past two years, which Ramirez described as a near-lifesaving turn of events. (Her current base pay comes out to $2,720 a month before taxes.)

Now, “I got a message from the landlords that they’re considering raising it,” Ramirez said. Her food and gas costs have skyrocketed. The Consumer Price Index shows that food costs shot up nearly 8% over a 12-month period that ended in February, the latest month on record. Average gas prices in Los Angeles County, meanwhile, increased by more than a dollar per gallon in a month and have been near $6 a gallon for weeks. A year ago, the average was $3.80.

Ramirez was also hit by a critical change in her company’s approach to health care. Previously, Sky Chefs offered employees an additional $5.67 per hour in lieu of using its health care plan. Ramirez took the money — about $900 extra per month — and bought subsidized insurance through Covered California for far less than that, using the difference to meet her budget.

But beginning April 1, Sky Chefs changed its policy. Now, workers are offered what the company calls “no premium” health insurance, and they no longer have the choice to take the supplemental $5.67 per hour. Ramirez’s workers’ organization, Unite Here Local 11, has protested the change, saying it was not collectively bargained, carries a high deductible and will hurt workers at the worst possible time. (Disclosure: Unite Here Local 11 is a financial supporter of this website.)

Ramirez needs a car to get to work, so she shoulders both a car payment and the gas price hikes. The $900 monthly reduction in pay, she said, eliminates any cushion against rising prices. She is trying to help her daughter, now in her second semester at West Los Angeles College, to pay for school, “but I’m barely able to make ends meet.”

When those at higher income levels encounter soaring prices, they may choose to cut back or skip on luxuries, but they won’t feel dramatic effects nearly as quickly because they don’t need to devote as much of their total income to the basics. A 2019 study found that higher-income households spend 64% of their monthly budget on necessities like food, shelter, clothing, transportation and health care. Lower-income households, meanwhile, must use 83% of their income to cover those same essentials.

During the pandemic, the state and federal government rushed out stimulus payments and raised unemployment benefits, and California enacted rent relief and tenant protection policies. With those programs ending, and with enhanced federal child tax credit payments from last year also phased out, lower-income families may quickly find themselves in desperate circumstances when their costs rise.

The median cost of rent is expected to rise 10% this year and healthcare costs will go up 9.6%, according to the Federal Reserve Bank of New York.

“With inflation kicking in, the disappearance of these income supports is being doubly felt by many families,” Chris Wimer, co-director of the Center on Poverty & Social Policy at Columbia University, said via email. When the enhanced tax credit payments ended in December, Wimer explained, “We saw a big spike in child poverty of 3 million to 4 million children. Absolutely, child poverty has increased.”

And the screws are being tightened. The median cost of rent is expected to rise 10% this year and health care costs will go up 9.6%, according to the Federal Reserve Bank of New York. Meanwhile, a survey of companies by the compensation software giant Payscale found that fewer than one in 10 employers plan to hike pay more than 5%, meaning most raises won’t keep pace with inflation.

Higher-income individuals and households in California will withstand that. In most cases, especially among the top 20% of earners, they have savings and investment funds that could be tapped in an emergency, and they often own homes and have fixed mortgages. Since they spend less of their overall income on necessities, they’re better positioned to maintain those hedges against inflation.

For lower-income Californians, this inflationary cycle may both prolong their economic standstill and further a wealth gap in the state. With rising prices snapping up every available dollar, low-wage workers have less (or no) money to save or invest. And rents, unlike gas or food prices, rarely go down once they’ve been raised.

“Typically, inflation is viewed as a significant tax on the poor,” said Manuel Pastor, who directs the Equity Research Institute at the University of Southern California. Pastor noted that it is highly unusual during a period of inflation for “wages at the bottom to be rising pretty rapidly,” as they are now, the result of market forces and the Great Resignation. Again, though, the escalating cost of basic goods and services is wiping out most of those wage gains for lower-income families.

Californians may yet see another round of financial relief. Gov. Gavin Newsom’s initial proposed state budget for the coming fiscal year projected a $45.7 billion surplus due to tax collections from the very wealthy, who enjoyed massive run-ups during the pandemic. Updated estimates from the Legislative Analyst’s Office say the surplus could rise to $23 billion more than Newsom’s original estimate, and that likely will trigger rules that mandate rebates to taxpayers. The governor has suggested that his revised budget plan in May will reflect that reality.

Beyond quick payouts, though, “We need to look at what structural impediments are in place that prevent employers from being encouraged or incentivized to offer better jobs,” said the PPIC’s Bohn. “We have to ask: Why is it that a third of our workforce in California is in low-wage jobs? Because this is difficult for them and ultimately for our society.”

In the meantime, the work goes on — and so does the struggle. When Amparo Ramirez was informed last year that Sky Chefs was recalling her, “I ran right back to work,” she said. “To have full-time hours, it was everything.” She just wants to be able to live on what she earns, and in a state roiled by inflation inequality, that is no sure thing.

The High Price of Life in the Golden State