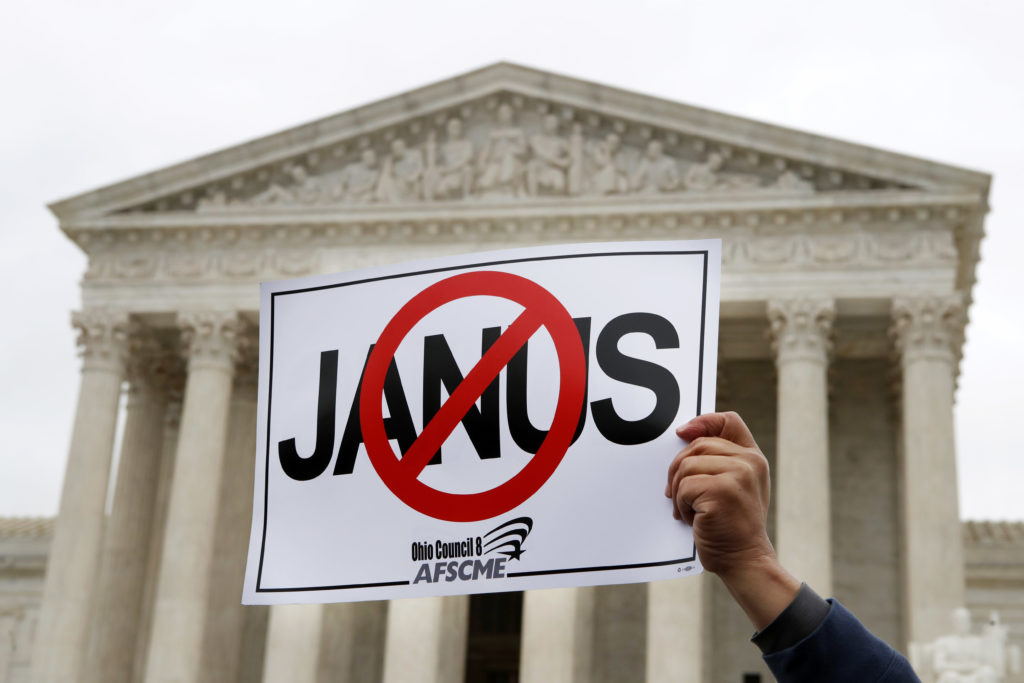 UNION MEMBER JOHNNIE MCDOW was game to show up at the three-day organizing training at the Los Angeles County Federation of Labor in May 2018. He just didn’t know what to expect.

He had never heard anything before about organizing. “I’d never even heard that term,” he says.

McDow, 54, is a silver-haired father of four from Santa Clarita. A slight accent and a few colloquialisms hint at his childhood in Tennessee, where his siblings and grandmother still live.

Jonnie McDow had never been anti-union—he just wanted the union to pay attention.

For a while, he was in pre-med at Brigham Young University. McDow says, “I could have been a doctor, but I didn’t enjoy that.” After a private contractor hired him some 35 years ago, he found that work installing and maintaining heating, ventilation and air conditioning (HVAC) suited him. McDow got his technical training and liked the pay rate. He later hired on with the Los Angeles Unified School District as an HVAC technician. He then became a member of the union representing workers in LAUSD that maintain heating and cooling​. McDow marveled at the health care, pension and the gradual pay bumps created by a union contract.

The 2018 Janus ruling created a financial drain that undermines the ability of public-sector unions.

When he arrived at the County Fed’s training, he was unaware that it was part of a national union effort bracing for a seismic event that is reshaping the labor landscape. Union federations and locals across the country were in overdrive, training and mobilizing organizers to reach out to public-sector workers and educate them about the benefits of union membership.

It was in preparation for the pending Supreme Court decision in Janus vs. the American Federation of State, County and Municipal Employees Council 31. The 5-4 Janus decision, which came down in June 2018, ruled that public-sector workers were no longer required to pay union dues nor “fair share” agency fees that cover collective bargaining for their wages and benefits or services such as arbitration. Union dues account for much of union budgets, but agency fees account for even more.

Janus set up a financial drain that undermines the ability of public-sector unions—about half of U.S. organized labor—to set standards for wages and workplace conditions, since fewer dues-paying members mean less clout in both in the public-policy arena and at the bargaining table.

The impact has been profound. Powerhouse policy advocates like the American Federation of State, County and Municipal Employees, National Education Association, the Service Employees International Union and the Communications Workers of America are threatened. AFSCME and SEIU suffered a sizable loss of agency fee payers in 2018. (Disclosure: AFSCME and SEIU are financial supporters of this website.)

“One of the big opportunities of the Janus fight was to engage members about the whole question of collective bargaining power.”

The Janus lawsuit was part of a long march by anti-union forces backed by right-wing foundations and political efforts backed by the billionaire Koch brothers in cities and states across America.

“They want to put more money in their pockets and control the political landscape in this country,” McDow says.

After the County Fed training, McDow was on board to organize and boost union membership. He had mobilized people in the past; he just didn’t think it was organizing. “I was doing this long before Janus, as you can see, but what it made us do is it made us go back and refocus our efforts on organizing people. We are union members—and we’re not union members because the union is some white knight on a steed that comes riding in to save us.”

ANYONE WHO KNEW MCDOW’S BACKSTORY might have been surprised that he had taken up the mantle to recruit new union members. That’s because in 2012, long before he engaged with the County Fed, he had galvanized a mini-movement that could have been construed as anti-union.

After the Janus ruling, union membership from the building trades in LAUSD went from 42 percent to 93 percent.

He was then working for the Los Angeles Unified School District, one among hundreds of painters, pipefitters, plumbers and heating and air conditioning technicians that keep schools functioning in the San Fernando Valley. They were all worried about the district’s proposed cuts and frustrated by what they saw as a lack of satisfactory union response.

LAUSD had proposed a reduction in pay for 4,500 workers like himself by chopping a work year from 12 months to nine-and-a-half. “I was looking at a two-and-a-half months pay cut without any say so in it whatsoever,” McDow says. “I couldn’t afford a 22-and-a-half-percent pay cut. And so, I went to my union [and asked], ‘What are you going to do for us?’”

He called a meeting to discuss budget cuts, and only seven people showed up. But McDow, using mass texts and email blasts, reached out beyond HVAC workers to those in different trades, all represented by unions that, like his own, are all part of the L.A. and Orange Counties Building and Construction Trades Council. Attendance built to more than 300. That “got the attention of the unions,” McDow says. “But we still weren’t getting a lot of help.”

The activists ultimately supported a move to reject union representation by decertifying their local, though no vote was taken. After hitting a number of roadblocks, the decertification effort fizzled.

McDow had never been anti-union—he just wanted the union to pay attention.

“I think he was really frustrated,” said Chris Hannen, Los Angeles County representative with the building trades council. So he invited McDow to lunch at Sharkey’s in North Hollywood to hear what he had to say.

The impact of the recession was still being felt, Hannen remembered. “Funding for [Johnnie’s] employer, LAUSD, was slashed pretty drastically. They faced layoffs; they had no pay increases. And they were just really frustrated. And Johnnie was organizing large gatherings to express that frustration and he was really effective.”

McDow’s organizing had drawn flak from all sides. “I started out trying to help people. Unfortunately, I created a really dark time in my life.” The efforts were “putting a target on my back,” he says. McDow had always supported the idea of cooperation between unions and management, and he began to re-engage with his union.

“I decided I needed to do this a different way. I needed to get involved in the negotiation of our contract.” He responded to outreach from Fred Larkin, a representative from McDow’s union, United Association Local 250, and joined the bargaining unit.

At the lunch meeting, says McDow, Hannen laid out a plan “that absolutely made sense to me. I finally sit down and I’m talking to somebody about my contract.”

THAT KIND OF INTERACTION “is the centerpiece” of building union cohesion and strength, says Fred Ross, organizing director of the International Brotherhood of Electrical Workers Local 1245, which represents some 20,000 members, including nearly 3,000 public-sector transit and power workers throughout California. (Disclosure: The local is a financial supporter of this website.)

“To me one of the big opportunities of the Janus fight was to engage members about the whole question of power, especially collective bargaining power,” Ross says.

Even before Janus, Ross’ local “set out to have one-on-one meetings with members, starting out by listening to them—what’s your experience with the union?”

Ross’ union devised skits that put workers at an imaginary bargaining table. “Will we be stronger if we’re 100 percent union or if we’re 40 percent union? Anyone who’s been part of a bargaining process knows about what’s called a last, best final offer,” he says.

“But they also know what the employer’s first offer was. Guess what—if 40 percent of us stop paying dues, that first offer is going to become the last, worst offer. We won’t have the power to move them like we do now.”

McDow and Hannen developed a constructive relationship; Hannen invited him to the May 2018 training session and helped McDow secure leave from his school district job to participate in a 10-day organizing drive. Hannen “asked me to take a week off to do it, then in July asked if I would be willing to do this on a full-time basis to help him out,” says McDow. “Next thing you know, I’ve done it for a year.”

When McDow first began educating other employees about the Janus decision and its ramifications, he was astonished to learn that many of his colleagues were unaware they were not union members—when they hired on, they agreed to pay agency fees and thought they were union dues. When he broke down the ramifications of Janus, many signed up union.

Union membership from the building trades in LAUSD went from 42 percent to 93 percent. “Forty-two to ninety-three, just from us talking to people,” McDow says.

McDow has now begun education workshops with employees of the city and county of Los Angeles.

Related Topics:AFSCMEFeaturedJanus v. AFSCMEL.A. County Federation of Labor
Up Next