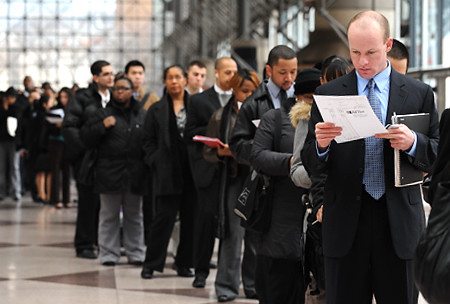 A new report released today by the AFL-CIO shows that more than 305,000 Californians will lose their unemployment benefits on December 31 if Congress fails to act to extend unemployment insurance.

Electrician Alexander Stewart, who has been out of work since July 2010 and will lose benefits if Congress fails to act by the end of the year:

We elect Congress to look out for the interests of everyday people. It’s appalling that elected officials would let petty politics stand in the way of extending unemployment insurance, the only thing keeping my family and so many others afloat in these tough times.

In California as well as across the country, jobless workers and their communities will be holding actions Thursday to call attention to the ongoing jobs crisis and to urge Congress to take immediate action to extend unemployment benefits. In Sacramento, hundreds of jobless workers will march to Rep. Dan Lungren’s office to call him to support an extension of benefits.

According to the report, young people and people of color will be disproportionately impacted if benefits are cut.  In California, the unemployment rate for young people 20 to 24 years old is 19 percent.  For African Americans the rate is 19.5 percent, and 14.7 percent for Latinos.

In California, the average benefit provided by the federal extension amounts to $292 a week, which covers a family’s minimum expenses for survival. That money is pumped directly back into the local economy when jobless workers pay for groceries, transportation, utilities, and housing. Budget cuts in recent years have greatly depleted the safety net in California, leaving the unemployed with even fewer options to meet basic needs if unemployment insurance isn’t extended.

With California unemployment hovering around 12 percent, job seekers far outnumber actual jobs. It’s deplorable that Republicans in Congress and their special interest friends are attempting to sever the one remaining lifeline for California’s jobless. California’s Republican members of Congress need to get their priorities in order.  Our state’s jobless need an extension of benefits far more than the richest 1 percent needs yet another fat tax break.

The prospect of losing benefits during the holiday season takes a tremendous toll on those suffering the hardship of unemployment.

Sherry Davis, who has been unemployed since January:

Losing a job through no fault of your own is one of the hardest things anyone can go through. I’ve spent every single day for months looking for work. It’s so difficult when the jobs just aren’t there. Not only is there the obvious major financial impact but emotional impact as well…you once felt good about yourself and your future when you got out of bed in the morning and then suddenly, it becomes difficult to even get out of bed. Now, because of politics as usual in Washington, I’m facing not only a holiday season but everyday not knowing whether I’ll be able to feed my family, pay my mortgage or keep the lights on in January. It’s devastating.

To view the full data and stories of unemployed workers in California, visit www.uistories.aflcio.org/CA#.

Don’t Discount This: Walmart Worker Issues Challenge to Her CEO