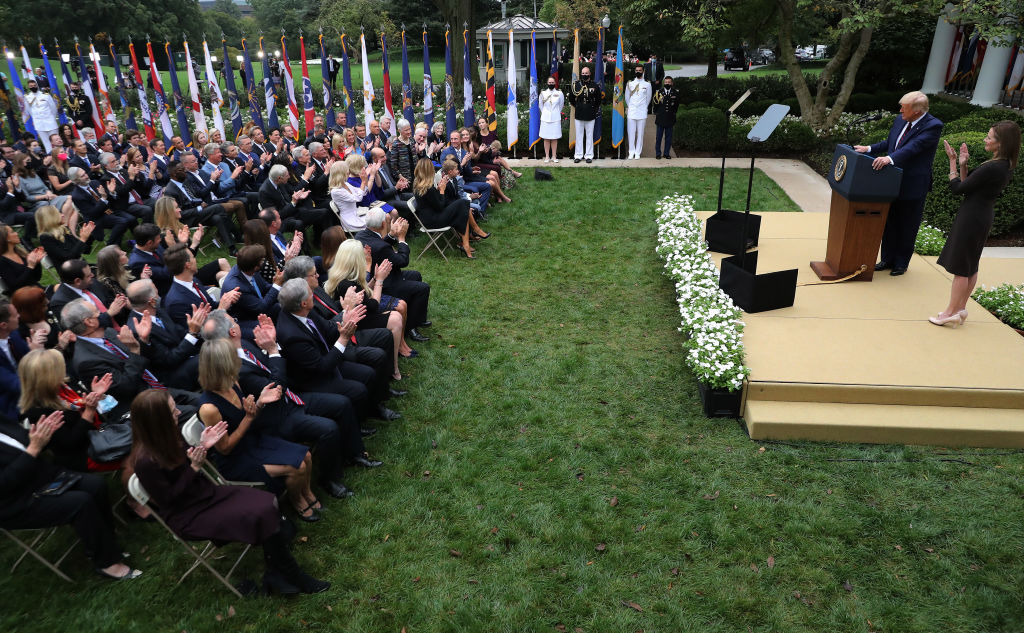 The White House gathering on Sept. 26 introducing Amy Coney Barrett as President Trump’s nominee to the Supreme Court. The ceremony is now regarded as a likely superspreader event. Photo by Chip Somodevilla/Getty Images.

The current saga of Donald Trump and his struggle with COVID-19 raises a host of questions. Some of these are political, but others cut deeper, including this: What is the responsibility of leaders to limit the needless suffering of others?

Neither the Constitution nor any acts of the courts or Congress compel a president to make the reduction of human suffering a priority. But the value of decency, and the expectation that power should be exercised for the common good, certainly do.

Trump’s illness, and that of the growing number infected within his circle, could probably have been avoided with basic safety measures. He will, and should, be judged for refusing to insist on such obvious precautions as mask wearing and social distancing. But what about the 7.4 million Americans who have contracted COVID-19, the more than 200,000 who have died? What was Trump’s obligation to those who have endured serious complications, or those who succumbed to the disease?

Compassion for a president in the throes of sickness should not preclude a clear-eyed assessment of whether he has used the immense authority of his office to limit needless suffering. In the context of the coronavirus pandemic, Trump’s failure to protect Americans from preventable pain and death will forever be intertwined with his legacy. The road not taken – strong federal leadership in testing, PPE production and distribution, contact tracing, mandatory use of masks and public education – traces the nation’s despair.

And we should not forget that millions of Americans face the threat of the pandemic without health insurance. An estimated 5.4 million American workers lost their health insurance between February and May of this year. During the President’s first three years in office, while the Trump administration worked to undermine the Affordable Care Act, the number of uninsured Americans increased by 2.3 million.

The revelation contained in Bob Woodward’s book “Rage” that Trump understood the ravages of COVID-19 early on puts his inaction into stark relief. Since he cannot invoke ignorance, what is left to explain the toxic mixture of lies and denial that has defined the president’s response to the worst infectious disease outbreak since the flu of 1918? If it was political calculation, nothing could be more morally bankrupt. If it was a lack of empathy, we reach the same conclusion. And if it was an inability to rise to the challenge of shielding a nation from intolerable anguish, then only a titanic ego would have precluded leaning on others to help mount a vigorous defense.

In contemplating the inescapable fact that the president could have blunted the horror of COVID-19 but chose not to, another question emerges: Would he have acted differently had his own infection and illness come much earlier?

There is no way to know, of course – but assuming Trump survives, his words and actions in the weeks to come will at least be telling. Will he finally acknowledge publicly that COVID-19, far from on the verge of disappearing, is a mortal threat to the country? Will he take responsibility for the dereliction of duty that has defined his response to the pandemic? Will he express genuine sympathy for those who have suffered and died, and the mourning families left behind?

Doing so, with no consideration for the political fallout, would not redeem Trump for the tragedy that has transpired on his watch. But it would save lives and serve as a warning to future presidents that spin, bravado and neglect are no substitute for leadership. Perhaps those who follow him will embrace this variation on the Hippocratic Oath: Do everything possible to prevent needless suffering, because the well-being of a nation depends on it.

Happy New Year, L.A.–Could Your COVID Obituary Be Next?