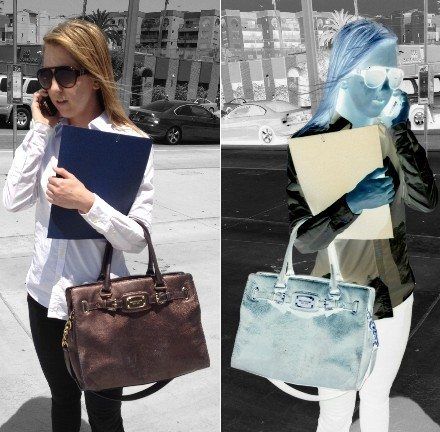 On Wednesday, June 13, Caroline, an organizer at a downtown press conference held by opponents of a proposed Chinatown Walmart store, noticed a young woman chatting to reporters. She’d seen her exactly one week before at another news conference. There, the young woman introduced herself as Zoe Mitchell, said she was a student at the University of Southern California and, somewhat vaguely, mentioned that she was interested in writing human interest stories.

At the June 6 event, Mitchell seemed sympathetic to the cause of workers who had a long list of complaints against the Walmart-contracted warehouses they worked in. And she had a request – could she talk to some of these workers who spoke English and record their names and stories?

Caroline was happy to accommodate the student and hooked her up with a lengthy interview with the worker present who spoke English. Then, on June 13, Caroline spotted “Zoe” and went over to her.

“Hi, you were at our event last week!” she said, greeting Zoe. But the young woman gave the organizer an odd look and tried to turn away.

“I just wanted to welcome you back,” Caroline persisted. “You’re the student from USC.”

“No I’m not,” the young woman replied coldly and moved away.

Before long word spread among the news conference’s other organizers that the erstwhile student might be a Walmart spy. Caroline now followed the young woman about as “Zoe” handed out her business card to the assembled journalists.

“What is your name, who are you working for?” Caroline asked, point-blank. She got an equally blunt answer.

“Stephanie Harnett. I’m with a PR firm hired by Walmart.” The card she’d been handing out revealed her employer: Mercury Public Affairs, a national “high-stakes” PR agency whose partners include political operatives and former elected officeholders, mostly from the GOP.

Harnett then went about her real assignment which, apparently, was to infiltrate the event and try and sway reporters. But the organizer followed Harnett with a video camera, asking, “Why did you lie last week?” Harnett kept dodging the other woman, trying to hide her face from Caroline’s camera until, finally, Harnett pleaded, “Can’t you just leave me alone – I’m just trying to do my job. I respected you doing your job, why can’t you respect me?”

An Internet search reveals that Harnett did once write for USC’s Daily Trojan newspaper before she graduated from the school. Frying Pan News called the number she had written on a media sign-in sheet, but it was not a working exchange. A call to the number on her Mercury business card was answered by a woman who directed us to spokeswoman Becky Warren in Sacramento, but a message left with Warren was not returned by press time; neither was a request for comment made to Walmart.

Harnett is still looking for respect — today Gawker announced that she has been fired and her Twitter account is closed. Whether her playing secret agent was Harnett’s own idea or her employer’s hasn’t been fully explained yet, although statements made to Gawker by Warren and Walmart disavow knowledge of her actions.

If, however, she was an undercover spy for Walmart it would mark an escalation in the corporation’s tactics as it fights to gain a foothold in downtown Los Angeles. Given recent allegations about Walmart’s bribery of public officials in Mexico and elsewhere, though, perhaps we shouldn’t be surprised. Especially in the age of James O’Keefe III, when agents provocateurs troll public events and record their political enemies’ quotes for use against them.

“It is unusual in this day and age to send in an undercover operative,” says Ross Johnson, a veteran Los Angeles publicist and CEO of Ross Johnson Public Relations, when asked about the incident. “But there are very few rules in the political 24/7 news cycle of a political public affairs agency. Am I surprised they got caught? No. Do they care they were caught? I doubt it.”