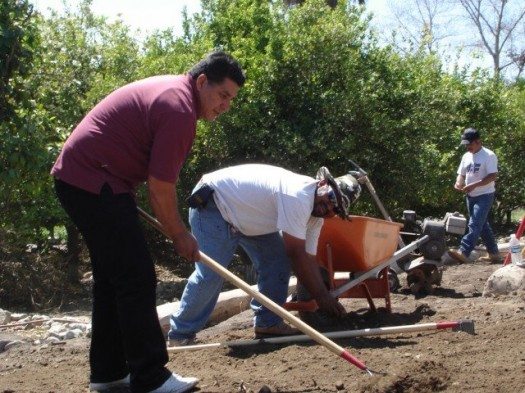 Our Nation so richly endowed with natural resources and with a capable and industrious population should be able to devise ways and means of insuring to all our able-bodied working men and women a fair day’s pay for a fair day’s work. A self-supporting and self-respecting democracy can plead no justification for the existence of child labor, no economic reason for chiseling workers’ wages or stretching workers’ hours.

Enlightened business is learning that competition ought not to cause bad social consequences which inevitably react upon the profits of business itself. All but the hopelessly reactionary will agree that to conserve our primary resources of man power, government must have some control over maximum hours, minimum wages, the evil of child labor and the exploitation of unorganized labor. –FDR, May 1937

In his recent State of the Union address, President Obama called on Congress to increase the federal minimum wage to $9 an hour and to link the future minimum wage rate to inflation. In doing so, the president took note of the fact that at today’s minimum wage, a family with two children that works full time sill lives below the poverty line. This, he insisted, is unacceptable, as “in the wealthiest nation on Earth, no one who works full-time should have to live in poverty.” Higher wages, the president insisted, “could mean the difference between groceries or the food bank; rent or eviction; scraping by or finally getting ahead.” And for businesses across the country, it would mean “customers with more money in their pockets,” which translates into the simple fact that “our economy is stronger when we reward an honest day’s work with honest wages.”

Not surprisingly, the president’s call for an increase in the minimum wage has elicited a somewhat predicable response from conservative Republicans. House Speaker John Boehner has called the idea “a job killer,” while House Budget Committee Chairman Paul Ryan called it “inflationary” and “counter-productive.” Some Republican leaders, such as House Majority Leader Eric Cantor and Senator Marco Rubio of Florida, have even gone so far as to advocate doing away with minimum wage/maximum hours laws altogether.

Interestingly, the legislation that gave us the minimum wage, the Fair Labor Standards Act, was also promoted by Franklin Roosevelt in his January 1938 State of the Union address. Here, after taking note of the fact that “millions of industrial workers receive pay so low that they have little buying power,” and hence “suffer great human hardship,” FDR also pointed out that these same workers are “unable to buy adequate food and shelter, to maintain health or to buy their share of manufactured goods,” all of which he insisted was a drag on our national economy.

Moreover, even though a majority of Americans—much like today—supported the passage of legislation that would set minimum wages and maximum hours, the Fair Labor Standards Act aroused fierce opposition among FDR’s conservative critics. The National Association of Manufacturers insisted that the law was but the first step in taking the country down the road to “communism, bolshevism, fascism and Nazism.” The National Committee to Uphold Constitutional Government insisted the act was unconstitutional and part of a larger conspiracy to turn the president into a dictator. To counter these absurd claims, FDR turned to one of his most effective tools, the Fireside Chat, where he calmly cautioned the American people:

not [to] let any calamity-howling executive with an income of $1,000 a day, who has been turning his employees over to the Government relief rolls in order to preserve his company’s undistributed reserves, tell you—using his stockholders’ money to pay the postage for his personal opinions—tell you that a wage of $11 a week is going to have a disastrous effect on all American industry. Fortunately for business as a whole, and therefore for the Nation, that type of executive is a rarity with whom most business executives most heartily disagree.

Since its passage in 1938, the Fair Labor Standards Act has helped improve the lives of millions of American workers—especially those at the bottom rung of the income scale. Moreover, contrary to the fear mongers of 1938 and today, minimum wage and maximum hours legislation has not been disastrous for American business. In fact, study after study shows that, on balance, raising the minimum wage has been good for the economy and business overall because it increases the purchasing power of the American consumer.

Given the sluggish state of our economy, and given the fact that the minimum wage as it stands today, when adjusted for inflation, falls far below the hourly income levels achieved in the mid to late 1960s, isn’t it time to offer hard-working Americans a pay increase?

In 1938, Franklin Roosevelt argued that if we want to move “resolutely to extend the frontiers of social progress, we must…ever bear in mind that our objective is to improve and not to impair the standard of living of those who are now undernourished, poorly clad and ill-housed.”

If Congress is serious about improving and not impairing the lives of the millions of working poor in this country, then it needs to act to reverse the downward spiral in hourly income that has occurred in the past four decades and get behind President Obama’s call for an increase in the minimum wage. The president is right. It is outrageous that in the richest country on earth, a person who works full-time is still forced to live in poverty. Surely the simple idea that an honest day’s work deserves an honest day’s pay is something that all Americans—even conservative Republicans—can agree should be part of the American dream.

(David Woolner is a Senior Fellow and Hyde Park Resident Historian for the Roosevelt Institute. His post first appeared on the institute’s Next New Deal blog and is republished with permission.)