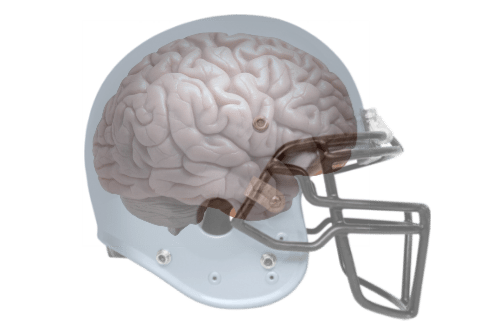 A few years ago, the Los Angeles Times began a practice of selling ads on the front pages of its sections. It was a slow build, with a preliminary announcement in 2007 and, two years later, it actually began to happen. Reaction from readers was not positive. The continued practice is still not exactly popular. At times, it’s clear these things are ads, while in other circumstances, they are designed to look like news articles.

Whether this piece falls into that new tradition, I’m not sure. The “article” was written by Paresh Dave, and tells us about Riddell’s new InSite Impact Response System, a football helmet Riddell says will protect players against concussions. (The system uses sensors inside the helmet, which wirelessly relay to the sidelines data about potentially traumatic hits.) High schools are purchasing the helmets and offering them to parents for free or at a limited cost and, apparently, “getting players and parents to try them has been a challenge.”

There are, however, a few things that might be worthy of including in an actual news article that would mention Riddell —

The cause of much of this was the company’s last great advance in concussion safety, the Revolution. In designing that helmet, Riddell sought to eliminate the risk of concussions. One of the consultants Riddell hired later told ESPN that “no helmet can prevent a concussion. Full stop.”

The company went forward anyway and designed the helmet.

Riddell then commissioned an “independent” study — which it paid for. The study was supposed to compare the helmet to other models, but the latter turned out to be, according to the book League of Denial, “random older models of indeterminate age”—a bit like testing a new drug against leeches and proclaiming it a wonder. Moreover, the researchers never tested the Revolution’s youth version.

Despite these flaws, Riddell marketed the new helmets as a, well, revolution, telling players and parents they would make them safe, and earning a huge mark-up on their head gear, which also grew Riddell’s market share dramatically. Years later, an investigation by the Federal Trade Commission forced the company to stop its misleading claims.

The new sensor helmet is based on HITS (Head Impact Telemetry System), which Riddell introduced in 2002. Which system, by the way, is part of the retired NFL players lawsuit.

Paresh Dave’s story is not the first the Times has published about Riddell. The paper has noted the largesse of the company in donating equipment to a local high school, and Riddell liked this 2011 article so much it’s featured on Riddell’s website.

Riddell has a pretty big incentive to make parents think it is creating safer helmets. A football helmet isn’t cheap, and the company’s legal troubles have led Rawlings—better known for baseball equipment—to re-enter the industry two decades after more or less ceding the market to Riddell.

My question is, Why is the Times running ads for Riddell?