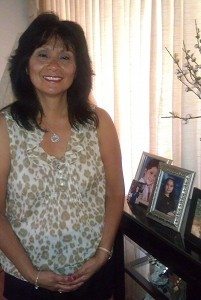 Cathy Ellorin has to fight for each and every hour of her job. In fact, she has to fight to convince the people who pay her that what she does is a job at all. It’s not as though she works short hours; actually, she gets no time off at all. Her job isn’t easy, either.

Cathy is currently employed as an in-home caretaker to her daughter Natalia, who has cerebral palsy. California State’s In-Home Supportive Services program (IHSS) provides Cathy with  financial support to enable her to stay at home with Natalia and keep her safe and happy. But Cathy has to fight to keep this support coming.

From the first years of Natalia’s life, Cathy could tell something wasn’t right. Natalia’s tremors were disconcerting enough, but the daughter’s inability to feed properly was far worse.

Cathy took Natalia to Children’s Hospital in Los Angeles for a wide range of neurological testing, which revealed nothing except a case of hypotonia. Cathy knew that couldn’t be right — the problem seemed to be worse than a mere lack of muscle tone. Natalia was missing all of her developmental milestones: She didn’t start walking until she was 2 and all of the things that seem to come naturally to other toddlers were much more difficult for her.

Natalia visited another six neurologists at marquee institutions — including Cedars-Sinai and UCLA — before being diagnosed, at the age of 14, with ataxic cerebral palsy. It was a mystery for Cathy why this took so long. To her it was clear that from birth Natalia demonstrated more than half of the symptoms associated with ataxic CP.

Today Natalia, now 16, has limited verbal skills and has issues with spatial and social limitations; she is so sweet and trusting that it is dangerous for her to be on her own. So she needs lots of care and near-constant supervision. Fortunately, through IHSS, Natalia receives the best care and supervision money can buy: her own mother.

Founded in the 1970s in response to disabled individuals’ calls for flexibility and control over their own treatment and caretaking, the IHSS provides an alternative to out-of-home care facilities by helping pay for in-home care for the disabled.

This program is a godsend for Cathy and Natalia. Without IHSS compensation, Cathy, who retired from her flight-attendant job to care for her daughter, would have to take another job and Natalia would most likely have to be placed in a group home.

Even though Cathy is grateful that IHSS exists, her experience with it has hardly been completely positive. As Natalia wasn’t diagnosed with cerebral palsy until she was 14, just two years ago, Cathy had to fight to get her into the program. Because Cathy was married at the time, she had to apply for a Medi-Cal waiver to get her daughter enrolled.

The difficulties didn’t stop there. When IHSS registers a patient, the agency sends a social worker to do an in-home evaluation of the needs of the disabled person. The social worker looks at precisely what the person needs assistance with and how much of it is needed— measuring how long each task takes in minutes. The social worker then adds up that time and IHSS pays, based on his or her evaluation. The maximum amount of time one can get for caring for a minor is 195 hours per month (e.g., for the month of August, 6.5 hours a day, seven days a week.) In San Diego, IHSS pays $9.50 an hour, which means that many in-home service providers need to hold another job – or go on welfare.

Initially, Natalia was authorized for only 70 hours of care per month. This short amount of time is not uncommon. Despite IHSS saving the state money compared to the cost of services charged by group homes or other such programs, there is massive institutional pressure to limit the amount of hours any one provider receives.

The number of hours allocated for home care are divided over three broad areas: personal care (including bathing, food), paramedical care (medication, exercise) and protective supervision (time spent watching patients for their own safety). IHSS is often reluctant to allot time for protective supervision and this was particularly bad for Cathy. She says she routinely hears comments from program administrators and social workers implying she shouldn’t qualify for protective supervision of her daughter because it’s her responsibility as a mother—comments she feels ignore the reality that supervision of a disabled child is infinitely more labor-intensive and time-consuming than for a non-disabled one.

The hurt from this cost-saving mentality was especially sharp after Cathy received the official diagnosis of her daughter’s cerebral palsy. When Cathy and Natalia moved from Los Angeles to San Diego following Cathy’s separation from her husband, their new social worker, after an evaluation, tried to cut their monthly care hours to a mere 20. The woman claimed that Natalia was no longer disabled and refused Cathy’s request for protective supervision.

For Cathy, that was it. She got in touch with Disability Rights of California, a nonprofit organization that provides pro bono legal advice to disabled people and their advocates. The group reviewed Cathy’s case and agreed that IHSS was completely in non-compliance. DRC provided documentation of exactly how and why IHSS had failed. Cathy sent this information, along with a written letter, to the head of her local IHSS, as well as to the heads of the San Diego County IHSS and the Health and Human Services Agency in Sacramento. Within a day she received calls from all three agencies and had her daughter given full hours in the program.

Despite this victory, Cathy remains deeply worried about the numerous other beneficiaries of this program who can’t fight, don’t fight or don’t have access or knowledge of the resources available to them. Moreover, many Californians don’t see the program as important, ignoring the fact that, in Cathy’s words, “We’re all going to be disabled at some time in our life, through age or an accident. You never think you’re going to be disabled.”

Even knowing how crucial this program is— and how many people it helps— cities, counties and the state continue to cut its budget. Most recently, California imposed an eight-percent hour cut to all IHSS recipients. Health care programs are always vulnerable to cuts during a state budget crisis, but Cathy believes IHSS is the wrong one to trim.

“It’s about how we treat people,” she says.