Jackie Robinson on the end of the bench with his teammates at Ebbets Field in Brooklyn, 1947. Photo: FPG/Archive Photos/Getty Images.

What the American public knows about Jackie Robinson is certainly inspiring enough. A stunning athlete who competed in four sports as a collegian at UCLA, Robinson went on to a monumental achievement, becoming the first Black American to play major league baseball 75 years ago when he debuted for the Brooklyn Dodgers on April 15, 1947.

Even so, it’s quite possible that Robinson is roundly underappreciated by those who know him only for breaking baseball’s color barrier. In truth, Robinson was a powerful civil rights advocate who spoke his mind both during and after his playing career, sometimes risking his safety to do so.

“People just forget that Jackie Robinson was a radical,” says Peter Dreier, a professor of politics at Occidental College and an author who has written extensively both about America’s history of social justice and its national pastime. “He was a ferociously principled person.”

With co-author Robert Elias, Dreier has written companion books, Baseball Rebels and Major League Rebels, that speak to the sport’s long history — some of it unwilling — as a vehicle for social movements. Included is the players’ own late-blooming decision to unionize, which was forged in the 1950s and came to fruition in 1966.

In advance of MLB’s leaguewide celebration of Jackie Robinson Day on April 15, Dreier spoke with Capital & Main by phone. 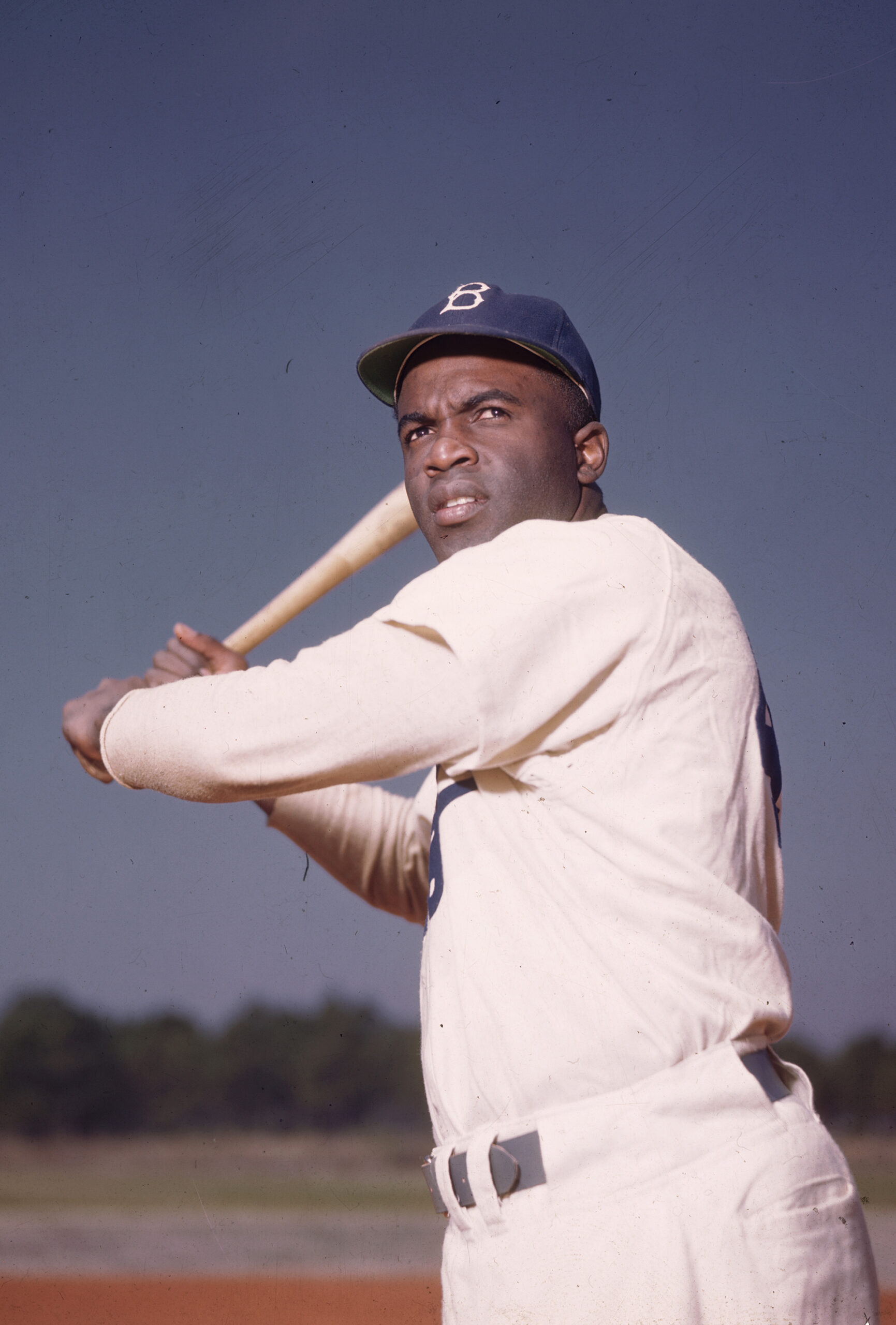 Capital & Main: Major League Baseball isn’t known as a particularly progressive sports business. Did it evolve socially at the same pace as the nation, or has it ever led?

Peter Dreier: Well, it definitely led with Jackie. The racial integration of baseball came in 1947, which was seven years before the Brown v. Board of Education decision and eight years before the Montgomery bus boycott — two defining moments of the modern civil rights era.

It’s hard for people today to realize how breathtaking and path-breaking it was to have Jackie Robinson playing on a major league team. Back in 1947, there were still Jim Crow laws. Black people still couldn’t vote in the South. People were still being lynched. There was no city in America with a Black mayor. There were two Black people in Congress. And here comes Jackie Robinson.

But as you note in Baseball Rebels, the movement to integrate baseball actually began well before Dodgers co-owner and top executive Branch Rickey signed Robinson, didn’t it?

Yes, although the story isn’t often told that way. There were efforts to integrate baseball going back to the 1930s, led by sportswriters like the New York columnist Heywood Broun and Wendell Smith of the Pittsburgh Courier, one of the most prominent Black newspapers in the country at that time. For that matter, the Communist Party [in America] played a big role, and leftist unions organized pickets in front of major and minor league parks and circulated petitions calling for the game to be integrated. It’s possible that Branch Rickey could have done it on his own — he had it in his mind — but he needed that movement to kind of force his hand.

“Baseball players were skilled craftsmen and exploited workers. They really nickel and dimed these guys.”

Jackie himself was very aware of all of that?

Jackie understood that this movement opened the doors for him, that it wasn’t just him and Branch Rickey. And he repaid that debt many times with his activism. His activism in the civil rights movement, during and after his playing career, is usually downplayed. He risked his life a couple of times to go down South and do pickets and rallies. He raised money for civil rights groups over and over. He was very courageous, and people forget that part of his life. 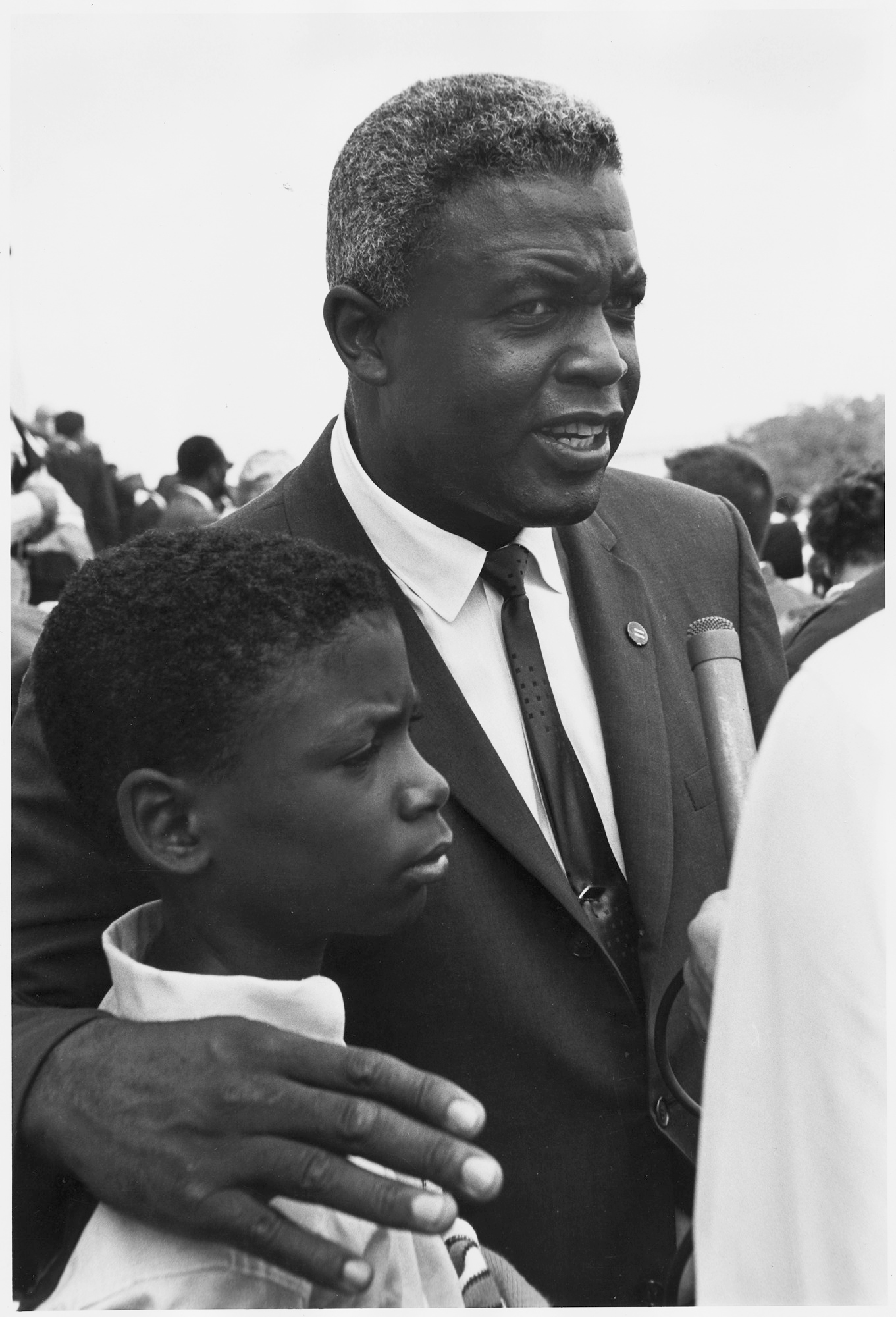 Jackie Robinson with his son at the March on Washington for Jobs and Freedom in 1963. Photo: Rowland Scherman.

It’s a piece of Robinson’s story that is sort of lost to the sands of time.

Yes. And even people like [football’s] Colin Kaepernick and [the NBA’s] LeBron James, though they’ve been publicly involved in social and political matters, probably don’t know that history. Or [baseball’s] Sean Doolittle — the ones who are speaking out now on different issues. We wrote this book for the general public, but I really hope that athletes read it and learn about their own history. When Sean Doolittle or [Dodger] Mookie Betts speak out about Black Lives Matter or gay rights, or criticize [former President] Trump for his immigration or asylum policies, they’re standing on Jackie’s shoulders.

Is it fair to say that even if they’re not seen this way today, major league baseball players represented an exploited class of workers for quite some time?

Certainly. Baseball players were skilled craftsmen and exploited workers. The beginnings of baseball occurred during the Gilded Age [in the late 1800s], and the owners of that day thought of themselves as the baseball version of the robber barons. They were going to make their money by exploiting the workers and increasing their profits. They really nickel and dimed these guys. They made them pay for uniforms and food, and they were kind of crude about it. It was pretty awful, and the players got pissed off. But at first they didn’t know they had any choice, and it went on that way for decades.

After a few failed efforts, the players finally formed a union, but in the beginning it was only to negotiate their pension plan. Was it hiring Marvin Miller in 1966 that really gave the union its power?

That changed everything — and as we mention in Major League Rebels, Marvin wasn’t the players’ first choice, so he really had to swallow hard before deciding to go for it. He was brilliant. He went toe to toe with the owners, and he won every battle he fought. With Miller leading the way, the Major League Baseball Players Association had the first players-union contract in major sports history.

“The Sporting News said that Jackie should stop being a crusader and just play baseball. That’s not unlike Laura Ingraham more recently telling LeBron James to shut up and dribble.”

One thing that’s clear in your portrayal of Jackie Robinson is that he was outspoken during his career, not just after it. I’m sure that didn’t make his path any easier.

He was criticized by some of the sportswriters of that time for being a loudmouth and a troublemaker. Jimmy Powers, who was a popular columnist at the New York Daily News, once said, “Whenever I talk to Roy Campanella [a Black player who joined the Dodgers in 1948], we talk about baseball. But when I talk to Jackie Robinson, we always wind up talking about social issues!” He didn’t mean that as a compliment.

The Sporting News, which was sort of the baseball bible, said that Jackie should stop being a crusader and just play baseball. That’s not unlike [Fox News host] Laura Ingraham more recently telling LeBron James to shut up and dribble. Jackie got a lot of that. A lot of Black players thought he was too outspoken, too. Many of them were just grateful to play baseball.

But Jackie continued to speak his mind, and as you mentioned, there is still some of that going on today in baseball. Would you like to see more of it?

Well, for example, MLB owns a sweatshop in Costa Rica. For many years the shop was owned by Rawlings, but MLB now owns a quarter share of the company that owns Rawlings — so they are the owner of a sweatshop. About 2 million baseballs are produced there every year, exclusively for MLB use. And the working conditions and the pay and disrespect of the workers is just horrible. It’s just outrageous.

Wouldn’t it be great if the Players Association sent a delegation of high-profile players down to Costa Rica after the season’s over, to draw attention to this? It would be hard for major league baseball to ignore that.

Will Lithium Save the Imperial Valley?