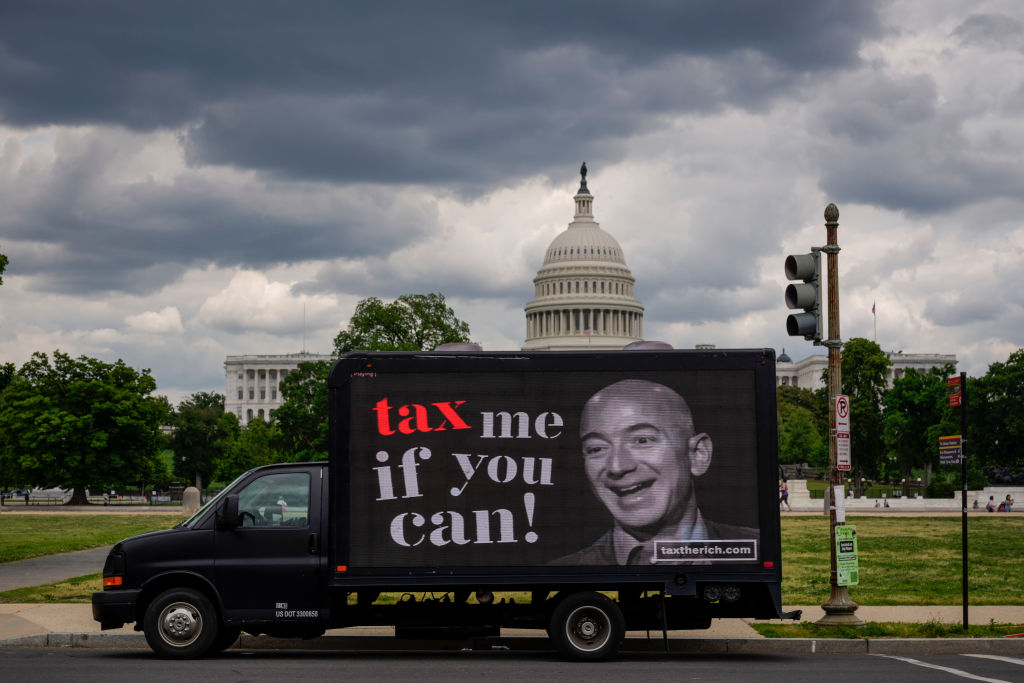 A mobile billboard calling for higher taxes on the ultra-wealthy on May 17, 2021 in Washington, DC. Photo: Drew Angerer/Getty Images.

During four years of Donald Trump’s high-anxiety presidency, Republicans could at least point to one goal accomplished amid the noise and two impeachments: the 2017 tax reform law. Hours after signing the bill, Trump was down at his Mar-a-Lago resort in Palm Beach, Florida, bragging to some of his most affluent friends: “You all just got a lot richer.”

His glee was unsurprising, once again confirming who the former president thought were his most important constituents. It was also the latest example of the GOP’s insatiable desire to cut taxes for the wealthiest Americans, a movement forged in the 1970s and 1980s by President Ronald Reagan and California anti-tax activist Howard Jarvis.

At the same time, a huge disparity between rich and poor continues to accelerate in California and across the country. The blatant unfairness of the federal tax code hasn’t escaped the notice of voters, who are increasingly open to the rising call for national and state wealth taxes.

A 2020 Reuters/Ipsos poll found that 64% of Americans favor some kind of wealth tax for the super-rich, agreeing they should “contribute an extra share of their total wealth” each year. That support crosses party lines, with 77% of Democrats backing the idea and 53% of Republicans.

The movement has also been fueled by an influential 2013 best-selling book, Capital in the Twenty-First Century, by French economist Thomas Piketty, who argued that society becomes unstable with wealth inequality. His solution: progressive wealth taxes. “Wealth is so concentrated,” he writes, “that a large segment of society is virtually unaware of its existence.”

During the 2020 presidential primary season, proposals for a wealth tax from progressive Sens. Elizabeth Warren and Bernie Sanders were widely popular, though Joe Biden never explicitly endorsed the idea. Billionaire candidate Tom Steyer proposed a tax whereby “anyone worth $32 million or more” would pay an additional 1 cent on the dollar. For those with more than $500 million, it would go to 1.5 cents, and for billionaires an additional 2 cents for every dollar. The result would be an extra $1.7 trillion in tax revenue over a decade.

“In theory, a wealth tax is a good idea because the income tax does a relatively poor job of taxing income for capital.”

A current proposal by Sen. Ron Wyden (D-Oregon), called the Billionaires Income Tax, would target about 700 extremely wealthy taxpayers — the top 0.0005% of Americans. It could be a crucial ingredient in funding whatever form President Biden’s Build Back Better plan takes when it reemerges this year.

The federal proposals are gaining more attention as an alternative to traditional tax increases that don’t enjoy the support of Democratic moderates in the Senate: Kyrsten Sinema of Arizona and Joe Manchin of West Virginia. Biden is naturally more inclined towards simply raising corporate tax rates and taxes on wealthy individuals but now sees a wealth tax as a potential, and maybe necessary, substitute.

“In theory, a wealth tax is a good idea because the income tax does a relatively poor job of taxing income for capital, especially at the top end of income distribution,” says Eric Zolt, a law professor and tax expert at UCLA. “But it’s challenging to do.”

Zolt notes that it may be easier to establish a wealth tax on the state level, since a federal law might run into constitutional issues, particularly in front of the current, conservative-leaning U.S. Supreme Court.

“The Constitution requires that direct taxes be done proportionally by states,” Zolt explains. “And part of the problem is that states are really unequal on the number of billionaires in each state.” California is notably home to more billionaires than any other, while poorer states like Alabama and West Virginia have zero.

Even in the bluest of Democratic-dominated states, the wealth tax has had a tough time. In California, serious proposals have failed to attract enough support to even get a vote in the Legislature.

“Increasing the upper marginal tax rates will go a long way in helping to fund social programs that are really necessary and potentially benefit the middle class in general.”

But recent history shows the state is at least willing to consider tax proposals for the common good. In 2009, California’s financial crisis had led to a $24.3 billion shortfall. Some were calling for a federal bailout to rescue the state from itself. But after the return of Gov. Jerry Brown in 2011, voters chose by a margin of 10 percentage points to tax themselves back to financial health via Proposition 30, which contributed to a state budget surplus.

Brown and other Democrats asked voters to raise their own taxes, usually a risky proposition for anyone vying for reelection. By contrast, in 2022, the wealth tax has few public champions in the state Legislature, and Gov. Gavin Newsom has shown little interest.

Even aside from Newsom’s lack of support, a bill introduced last year in the Assembly failed to get traction partly because of the ongoing state surplus, which grew even during another pandemic year. But last month, Assemblymember Alex Lee (D-San Jose) reintroduced his plan for a tax on extreme wealth. AB 2289 is essentially the same as the bill that failed last year — which would levy a 1% tax on assets worth more than $50 million, and a 1.5% tax on net worth over $1 billion, excluding real estate.

“Even though we have a comparatively progressive tax code in California, a lot of folks benefit from being able to amass large amounts of wealth every year,” says Christoph Mair, a legislative advocate for the American Federation of State, County and Municipal Employees. “Increasing the upper marginal tax rates will go a long way in helping to fund social programs that are really necessary and potentially benefit the middle class in general.” (Disclosure: AFSCME is a financial contributor to Capital & Main.)

One especially engaged activist group is the Patriotic Millionaires, founded in 2010. With more than 200 millionaire (and billionaire) members in 31 states, their efforts began with a letter sent to then-President Obama asking that the Bush tax cuts for the wealthiest Americans be allowed to expire.

“There are a lot of people who feel that rich real estate developers are the most important people in the universe and just should not pay any taxes and that only working people should pay taxes,” says Morris Pearl, chair of the Patriotic Millionaires and author of last year’s Tax the Rich! How Lies, Loopholes, and Lobbyists Make the Rich Even Richer.

“This went from a sort of crazy idea — actually taxing wealthy people based on their wealth — a few years ago to being part of the debate.”

A former managing director at the investment firm BlackRock, Pearl says the goals of the Patriotic Millionaires are not just idealistic but practical, and he suggests that it’s increasingly common for high earners and business owners to share this view. “Their investments, their businesses, depend on the fact that the United States is a country with hundreds of millions of people who can pay their bills every month,” Pearl explains. “Companies make money from people paying their bills. It’s not money trickling down from the top to the less wealthy people. It’s money trickling up.”

Even aside from their impact as a group, many members of the Patriotic Millionaires are active politically, regularly donating to politicians — which already gives them access unknown to most voters. “I handed AOC a copy of my book and she said, ‘You know, Morris, you’re preaching to the choir here.’”

The group is largely focused on three goals: seeing rich people pay more taxes than working people; minimum wage increases; and lessening the influence of big money in politics. With Biden now in the White House, the idea of a progressive wealth tax is at least part of the discussion.

“This went from a sort of crazy idea — actually taxing wealthy people based on their wealth — a few years ago to being part of the debate,” says Pearl, noting that today both the White House and leaders in the Senate “are talking about some of the ideas that we’ve been working on for years. We’ve certainly made progress.”

For many supporters of a wealth tax, the motivation is not just the needs of a particular year’s budget. It’s really about fairness. Billionaire investor Warren Buffett famously noted a decade ago that he pays a lower rate than his secretary, and advocated for a minimum tax on top wage earners.

Not much has changed since that startling admission of unfairness, but activists and lawmakers will keep trying to establish a wealth tax. And the largest portion of American taxpayers are becoming increasingly concerned, in an era when the super-rich are now able to afford their own competing space programs.

“People are becoming more aware of the staggering inequality,” says Mair. “It’s not only really unfair, but we have a lot of issues we should be dealing with — paying our teachers and health care workers better, for example. People are starting to come around to how unfair it is that we’re choosing to create a new American aristocracy. The wealth that is amassed right now is pretty staggering historically. We can do better.”

What If Voting Became Mandatory in the United States?

Historian Nancy MacLean on the Snowballing Emergency of American Democracy