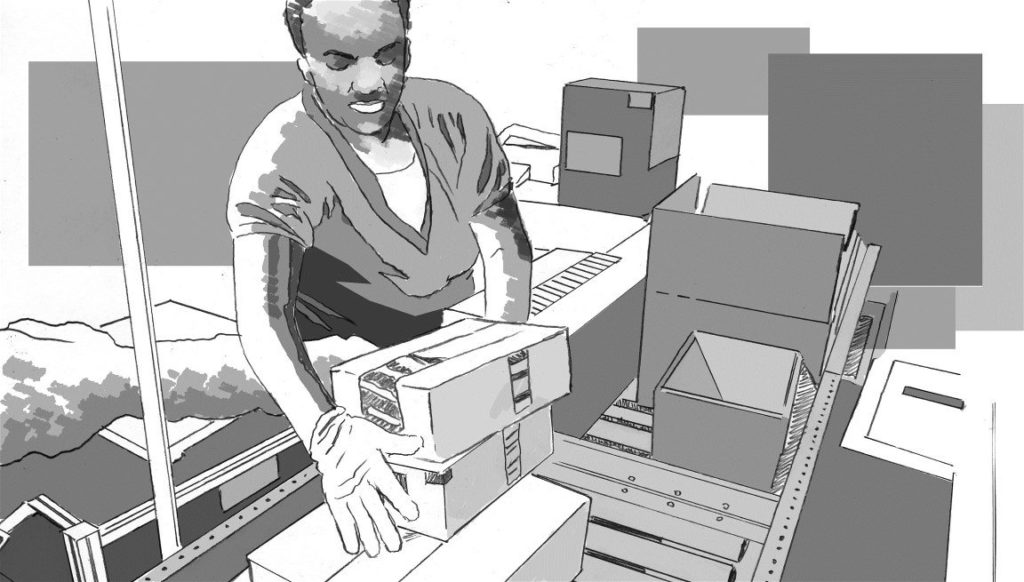 “Ain’t that about nothing,” Macy Farmdale said. “Nine to zip, including the so-called liberals.” She shook her head. “What chance does the working woman have, I ask you.”

Jess Dixon said, “It’s all about keeping the big conveyor belt going, Macy. Us peasants have no choice but to fight and scrabble each day for our rice and beans.”

The two chuckled mirthlessly. They lamented the recent Supreme Court ruling wherein employees were expected to go through their end of shift security screenings on their own time—no matter if it took five minutes or half an hour.

Farmdale leaned across the lunch table toward the other woman. “This is why we need a union,” she whispered. She leaned back and had more of her chicken salad sandwich.

Jess hunched her shoulders. “That wouldn’t change the ruling. I bet them unions filed, you know, friend of the court briefs in this case and where did it get them or their members? Screwed royally like always.”

“I don’t know they did but that’s not a reason to roll over.”

Aware there were others in the room and not sure if one of them wasn’t a company snitch, Jess tempered her words as she spoke softly. “Come on, Macy, the reality is we got to do for ourselves the best we can. Keep our heads down and do the job they give us.”

“And hope they throw us a bone now and then.”

“At this stage of the game, what else? Well,” she added, brightening, “that and hope to win the lottery.”

Jess spread her arms wide. “That’s the system we’re fighting to bring to Iraq and Afghanistan.”

Hank Dixon and Larry Wardlow sat at Dixon’s small kitchen table working out a plan of action. Each had a cup of coffee before him. Dixon’s was the one with the Batman logo his sister had bought him for a birthday some years ago. Before she slipped again and disappeared down the rabbit hole of addiction.

“Nothing came of that before,” Wardlow pointed out. “Belle played it close to the vest then, which probably means she’s holding out for a good price from the university.”

“Maybe,” Dixon conceded, “but she’s grateful Alma was so helpful back when she was married to that doctor or whatever he was in the Valley.”

Wardlow made a sound in his throat. “Till he dumped Belle for that blonde with the rack. Anyway, money has a funny way of overcoming those feelings.”

“No argument. But if we can get the tenants fired up, organized, we can push back.”

“We can’t stop the sale if she wants to do that, Hank.”

“That is so. But there are rights we have as tenants. Dig this, L.A. has a higher percentage of renters than New York City.”

Wardlow sipped from his coffee. “Damn, you wouldn’t figure that.” He frowned, then said, “But to really be serious, are we talking about trying to get a lawyer? One of those what do you call them, pro something types from like Legal Aid, something like that?”

“It could get to that,” Dixon admitted. “Juanita tells me even though landlords have the upper hand, they hate going to Department 94, that’s where they hear eviction cases at the downtown courthouse.”

He hadn’t mentioned to Wardlow or anyone else that his nephew could possibly obtain some inside dope from a man he’d met at his poker game the other week. Nothing had come of that yet. He saw then no reason to state what might turn out to be a hollow boast—to sell a wolf ticket, in the neighborhood parlance. That is Dixon assumed the man, a lawyer who’d worked for a large firm, would have such contacts, given he’d offered to provide information useful to his niece on her situation.

“Anyway, it could be worse,” Dixon continued. “From what I’ve been learning, something like sixty to seventy thousand people are evicted in L.A. each year. Median rents are now over two grand a month.”

“What are poor folks like us supposed to do?’ The retired barber made a sour face.

Dixon smiled. “That’s why we got to work together, brother.”

“Okay,” Wardlow said, clapping his hands lightly, “Armando in 4C said he’ll meet with us, but not in his apartment.”

“What’s he scared of? It ain’t like Grace is going to show up at his door swinging a crowbar.”

Wardlow cocked his head, giving Dixon an odd look. “The gunshot thing has him, you know, edgy. Quiet as it’s kept, it sits there in the back of my mind too.”

“Probably some pants saggers high on who knows what.”

“You keep saying that, Hank, but you know how it gets. People gonna supply their own explanations in a situation like this.”

“Our job is to keep them on point, Larry.”

“I hear you, Sergeant Rock,” the other man joked.

Dixon’s smartphone buzzed. It lay next to his Batman cup. He picked it up to read a text from his nephew.

“Huh,” Dixon said, deciding to share the information. “Little Joe just sent me this. It’s about what might be the university’s plans.” He held the phone so his friend could read the message.

Wardlow exclaimed, “Da-yum. That could change everything.”