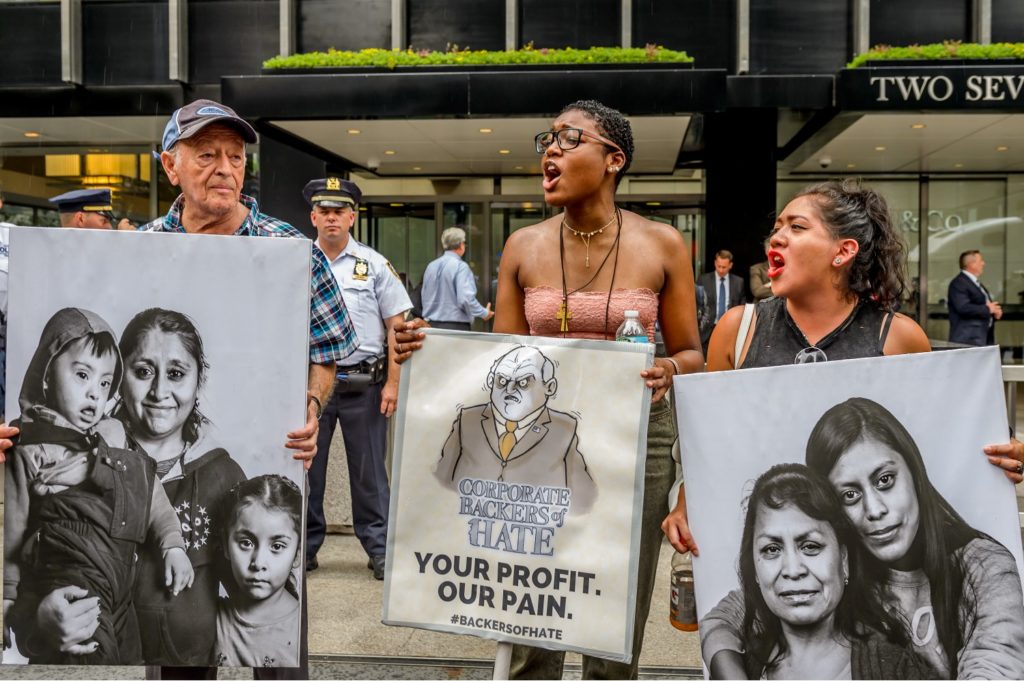 “The Trump era has brought a renewed activism that calls on corporations
to take moral stances.”

Consumer movements have been gaining strength and effectiveness since the advent of social media in the mid-2000s. And if there were any doubt among corporate communications executives that the Trump administration would galvanize those growing movements, it probably evaporated on the evening of January 28, a scant eight days after the inauguration of the 45th president.

As thousands of demonstrators converged at New York’s JFK Airport to protest Trump’s day-old executive order temporarily banning travelers from seven majority-Muslim countries, the New York Taxi Workers Alliance announced it would strike for one hour in solidarity with the protesters and refuse to pick up passengers at the airport. In response, ride-sharing service Uber tweeted that it was suspending “surge” pricing for rides from the airport so that passengers affected by the taxi strike would not have to pay extra due to the expected increase in demand.

The public response was swift: Hundreds of Twitter users, apparently under the impression that Uber was capitalizing on the protest to increase revenue, announced they would boycott the company, going so far as to delete its app from their smart phones and use rival Lyft instead.

The incident was a lesson in maintaining and projecting brand identity in an era of political polarization. Lyft did not turn off surge pricing, so users were forced to pay more because of the additional demand for the service. But it did announce that it was donating $1 million to the American Civil Liberties Union, which was fighting Trump’s action in court. Uber CEO Travis Kalanick had said in a memo to employees that the ban would harm many of its drivers and promised to raise the issue with Trump at an upcoming meeting of the Strategic & Policy Forum. The group, commonly known as the “business council,” was composed of CEOs of major corporations such as PepsiCo, GM, IBM and Boston Consulting Group, among others. But it wasn’t enough to overcome the company’s perceived profiteering at JFK. Though travelers would have to pay more for Lyft’s service and hire “scabs,” in effect, during the taxi-drivers’ strike, many trying to get out of JFK flocked to Uber’s rival.

“Platforms like Twitter have changed the scale of participation, making it more accessible. Advertisers are more aware of social media, and it scares them.”

“The Trump era has brought a renewed activism that calls on corporations to take moral stances,” said Ana María Archila, co-executive director of the Center for Popular Democracy. The JFK incident, she said, “brought Uber to task on their relationship to the Trump administration.” Kalanick quit the advisory group a few days later, saying that membership had been misinterpreted as endorsement of Trump policy. Trump disbanded the business council six months later as more execs quit amid public outcry over his comments on the white supremacist riot in Charlottesville, Virginia in August.

Consumer movements have existed for more than a century, enlisting customers and potential customers to pressure companies to change policies or products and to seek government regulation. Originally they sought safer products, fair treatment of workers and transparency. Early examples include efforts to ensure food safety following the publication of Upton Sinclair’s novel The Jungle exposing unsanitary conditions in Chicago’s meatpacking industry, and Ralph Nader’s quest to shame the auto industry into placing seat belts in cars. More recently, political groups have gotten involved, boycotting companies or pressuring them to withhold advertising from certain media outlets.

In the 1970s and ’80s, evangelical Christian groups and others protested and boycotted media companies over what they considered inappropriate content in film, television and music. Those campaigns led to the NC-17 movie rating, a TV ratings system for parental guidance and labeling of explicit content in audio recordings. In 2010, after conservative talk-radio host Dr. Laura Schlessinger disparaged an African-American caller and used the N-word 11 times (though not directed at the caller), advocates for minority groups contacted advertisers and she was essentially shamed into ending her program.

The cause for the recent proliferation of consumer-driven movements is related to what helped get Trump elected: alienation from, and dissatisfaction with, the political process.

“But the one big catalyzing campaign that entrenched and scaled [consumer movements] was Glenn Beck,” said Angelo Carusone, president of Media Matters for America, which says it “corrects conservative misinformation in the U.S. Media.” Carusone told the Huffington Post he launched the @StopBeck Twitter account in 2009 to pressure companies to cease advertising on the Fox News host’s program because of the “willful lies” Beck was broadcasting “to advance a personal or political agenda.” With civil rights advocacy group Color of Change, Carusone convinced hundreds of advertisers to quit Beck’s program, and Beck left Fox News in 2011.

“What was different about that campaign was that it used social media,” Carusone told Capital & Main. “Platforms like Twitter have changed the scale of participation, making it more accessible.” And the public nature of those platforms make companies more likely to respond, said Robert Wynne, president of Wynne Communications, a Redondo Beach-based public relations company, and author of Straight Talk about Public Relations: What You Think You Know Is Wrong. “Advertisers are more aware of social media, and it scares them,” he said.

Since Election Day 2016, Carusone said, “there’s been a massive surge in these consumer-driven movements, a really sharp increase.” Examples include the #GrabYourWallet boycott of companies that sell Trump family-branded products or supported his presidential campaign, and the Sleeping Giants campaign to convince companies to pull their advertisements from Breitbart News and other white-nationalist websites. The Center for Popular Democracy’s Backers of Hate website, enables users to send emails to CEOs and board members of companies the organization has identified as advancing or financing anti-immigrant or anti-labor policies.

Once companies align themselves with the values of consumers, they’re often pushed into the political arena to prove themselves. This presents risks for large companies.

Carusone suggested that the cause for the recent proliferation is related to what helped get Trump elected: alienation from, and dissatisfaction with, the political process. “You have this giant well of people that want to be engaged, but they don’t feel like engaging in politics,” Carusone said. The perception exists that “you contact your Congressman, but even if you persuade them, there’s so much gridlock nothing’s going to get done. So people look to these consumer-driven efforts where you’re able to talk to a powerful decision maker really quickly through social media, and these companies respond. It’s kind of addictive in this moment of disorientation and powerlessness.”

The new facility of consumer communication, a polarized political environment, the spate of divisive policies and statements from the president, and a trend toward lifestyle branding have combined to force companies to take positions in the political arena. “There’s been a shift in the level of awareness by corporations of what’s at stake at this moment and what it means to tie their brand to this administration,” said Arisha Hatch, managing director of campaigns for Color of Change. “In 2016 we saw a lot of people staying on the bench. Now I think there’s an active conversation going on inside corporations across the country about how they’re going to show up.”

Hatch’s hunch was verified at the meeting last month of the Darden Leadership Communications Council, an organization of about 40 communications professionals from Fortune 500 companies, trade media and academia convened by the University of Virginia’s Darden School of Business. “This particular topic—companies and [industry] leaders raising their voices around social and political issues—dominated discussions at our meeting,” said Steve Soltis, executive in residence at the school’s Management Communication Area. The movements have forced companies to figure out when it’s appropriate to step into debates, and how, Soltis said.

“In the Trump era, there is no neutrality,” said Adam Duhachek, professor of marketing at Indiana University’s Kelley School of Business. A major reason companies have found themselves grappling with the question is the recent trend toward lifestyle branding, he said. “As a natural consequence of companies adopting lifestyle branding as a key strategy to differentiate themselves, they’re going to have to take a stand,” Duhachek said. Once companies position themselves as aligned with the values of consumers, he said, they’re often pushed into the political arena to prove themselves. This presents risks for large companies, Soltis said: “We live in this fractured political world and if you come out on issues that are really wedged, you’re going to upset a large contingent of your consumer base.”

Carusone pointed to a petition to get Macy’s to drop Trump’s clothing line from its stores after, among other divisive statements, he began peddling the lie that President Obama was born in Kenya, and thus ineligible for the presidency, as an example of the risk inherent in lifestyle branding. The petition garnered 600,000 signatures in just a couple of weeks, Carusone said. “The reason people responded to it was because Macy’s had a particular brand about wholesomeness, and was associated with these holidays like Thanksgiving and the Fourth of July, so there was a real contrast between the syrup and nostalgia Macy’s was presenting and having this strong relationship with someone engaging in bigoted bullying,” Carusone said. “Once you invest more in building relationships with customers, that creates the expectation that you’re going to behave in certain ways—so when you don’t, you have a problem.”

Efforts on the left seem to be more organized and more targeted than efforts on the right—and that makes them more successful. Sean Hannity, for instance, used his Fox News show to defend Alabama Senate candidate and accused child predator Roy Moore. Media Matters responded with a campaign successfully pressuring brands, including Keurig Beverages, to pull advertising. Hannity’s supporters then posted videos online showing them smashing their Keurig coffee makers. The company expressed regret over how its decision had been communicated but did not reverse it.

In contrast, the Center for Popular Democracy’s strategy of bypassing corporate feedback channels with its Backers of Hate site is “brilliant,” said public relations executive Wynne. Rather than publicly post company officials’ email addresses, the center acts as a go-between and forwards readers’ complaints directly to the executives — shielding the organization from accusations of revealing private information.

“When the conversation becomes about left versus right, it gives corporations permission to stay on the sidelines,” Color of Change’s Hatch said. “But when it’s framed as right versus wrong or dangerously impacting certain communities, our moral authority is much stronger. Executives are asking themselves, when the history books are written, how will they have shown up.”

The Business of Change: Can Business Schools Make Companies Ethical?

The Business of Change: Do Corporations Want to Save America?