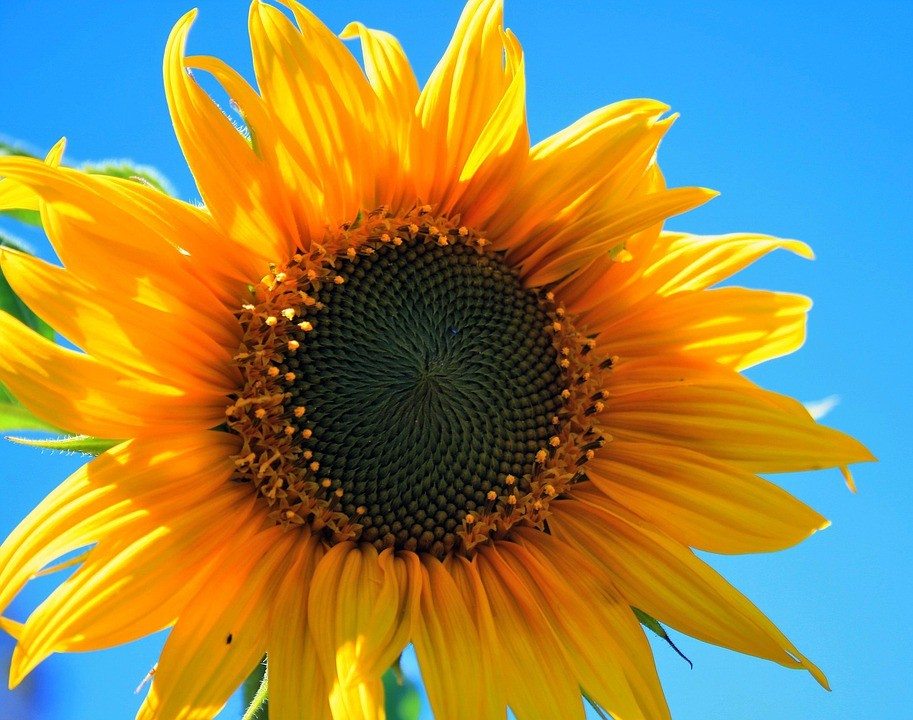 Everybody knows that sunflowers turn their heads toward the sun. But until now no one knew whether the movement simply followed the sun’s arc, or whether some internal rhythm guided the plants. Now we have a clue. According to a study at the University of California, Davis, the external attraction comes from a built-in, circadian-directed movement.

Circadian rhythms, as scientists define them, include physical, mental and even behavioral changes that follow a roughly 24-hour cycle of light and darkness in the environment. They affect humans and animals, and now we know, plants.

Thinking just about ourselves does not support life in the long run.

Sunflowers don’t just follow the light — in their stems they actually build cell structures in darkness to move the flower-head to prepare it to take in the first light of sunrise. During the light, they build on the opposite side of the stem to move the head toward sunset. As plants mature they stop movement and remain focused on the warmer morning light, which attracts more pollinators. The result: more and stronger seeds for their offspring!

When a summary about this story ran in the Los Angeles Times, I talked about it with my wife, Susan. She holds a Master Gardener certificate from a UC program and has been a community gardener since 1999. We’re both quite enamored by the private life of plants, as the British TV series was called. Susan remarked: “That’s the great thing about plants, they are never thinking just about themselves. They think about the next generation.”

Her observation underscores America’s problem: We mostly think about only ourselves. We think about what we have, what we want, what we can get and how we can keep it. We worry more about whether we will have a rich enough life, than if we will enjoy a good enough life.

Certainly that is true about the highly affluent and the rich. My favorite targets are BMW drivers, who, in one UC Berkeley study, ranked high in rudeness on the road. But attitudes slop over into other ways we measure our economy: A slight stock market dip gets headlines; quarterly earnings top long-range corporate investment; continued profits in the oil industry are more crucial than saving the planet. As neuroscience professor Robert Sapolsky wrote in a Los Angeles Times editorial, “Conspicuous loutishness among the ruling class should be no surprise.” Research shows that the rich are less “pro-social” than the rest of us, more selfish, less generous, and less honest. Not much thinking about the future.

That behavior runs counter to the prevailing ethos of American Indian cultures. They think that we must weigh every decision based on its effect on our children and their children – even to the seventh generation. That’s why members of the Standing Rock Sioux and the Lakota Sioux have been protesting an oil pipeline in North Dakota. They have evidence that any leakage – and pipelines have a way of inevitably leaking – will pollute their water, forever. They’ve even managed to shut the construction down and hope to stop it permanently.

Thinking about the future drives David Rosenberg, CEO of AeroFarms. He turned an abandoned New Jersey industrial site into a vertical farm. He grows vegetables in stacks of pallets using 95 percent less water than conventional farming, energy efficient LED lighting and no insecticides. He thinks beyond the present, knowing that agriculture must use dramatically less water, require less land and produce less waste.

Some Los Angeles-area restaurateurs who are committed to buying local and sustainable have been thinking the same way. When drought struck one of his key suppliers, the Coleman Family Farm in Carpinteria, Chef Evan Funke vowed to stay with them through the drought, even though it meant less produce at a higher price. A couple of years earlier he had led a group of chefs to host a fundraiser for another farmer further north. That grower survived and now uses 50 percent less water. As the Los Angeles Times quoted Funke, “That’s what sustainable is…You have to support the whole system.”

So thinking just about ourselves, how much we have and what we can get does not support life in the long run. It won’t support our home the Earth. Our religious traditions have always said that, but now we are seeing its truth more clearly. Apparently, both tendencies – focusing on ourselves or practicing generosity – exist within us as well as outside of us. As my wife says, “Gardening makes you generous.” Now we can even see that in the life of sunflowers.

California Doubles Down on Its Green Economy, But Kicks Cap-and-Trade Down the Road