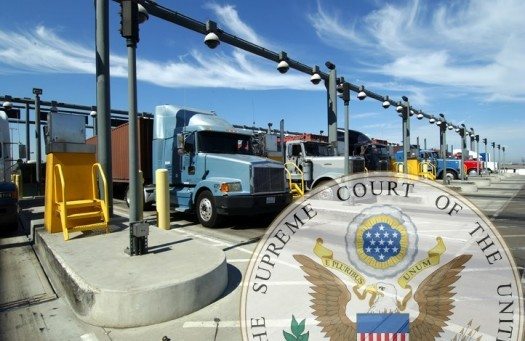 The trucking lobby wins on two minor elements, but Port of L.A.’s successful program to cut pollution and set standards for trucking survives.

Last Thursday the U.S. Supreme Court ruled in a case that had the potential to impact millions of people in Southern California – people who have been breathing cleaner air thanks to the Port of L.A.’s Clean Truck Program. The Clean Truck Program is an innovative policy that has been successful in reducing port-related truck emissions by as much as 90 percent. But it has enemies, most notably the trucking companies who profited from the dirty, unregulated system as they worked on behalf of Walmart, Target, and every other big importer.

The national trucking lobby, on behalf of these firms, sought to kill the program by challenging it in court. As we passed environmental and public health milestone after milestone, the trucking industry filed legal motion after legal motion, and the case bounced between all levels of courts. But Thursday was the big one—the highest court in the land finally weighed in on the legality of the program overall. This ruling would be the culmination of almost five years of litigation filed by the industry (not the truck drivers), litigation that was filed even before the Clean Truck Program went into effect in 2008.  And while many of us had been waiting for this ruling for a long time, when it finally came down, it was, frankly, pretty unremarkable.

But then the industry declared victory.

Huh? I quickly re-read the complete ruling, and then re-read it again.

Sure, the Supreme Court had thrown out two minor provisions on parking and listing phone numbers (more below). But the heart of the Clean Truck Program was intact. The trucking lobby had attempted to kill the program in the courts, and they failed. Today we are right where we were on Wednesday, before the ruling. The Port of L.A. has a successful program cutting lethal pollution, and there is still serious work to be done in order to sustain those gains.

The Clean Truck Program was developed by the Port of L.A., based on input from the Coalition for Clean and Safe Ports – some 40+ Southern California organizations including environmental, public health and environmental justice groups; immigrant-rights, faith-based, and community groups; unions and worker groups.  We were all concerned about a failed port trucking system that provided crappy jobs, failed to mitigate its impacts on the community, and literally killed three people every week from excessive tailpipe emissions.

So the port developed a set of standards for the industry, and required accountability from trucking companies. Hundreds of companies would have to upgrade a fleet of over 12,000 trucks to meet more stringent emissions standards.  And those companies would have to sign contracts with the port (“concession agreements”), agreeing to a set of operational standards and port oversight. The idea of port oversight didn’t sit well with the trucking companies, who wanted the basic framework of these agreements thrown out, claiming that the port had exceeded its authority.

Five years later, as the trucking industry continued to fight the program, we’ve managed to reduce truck emissions by 80 to 90 percent.

Victory for the trucking industry? Yes, two provisions in the concession agreement were thrown out. The Port of L.A. had required trucking companies to develop a plan for off-street parking, so that local residents would not have to deal with big rig trucks parking in neighborhoods. And the port had required companies to affix a placard on each truck with a phone number, so that community members could call the port if they saw a truck involved in something unsafe. The Supreme Court found that the parking and “How’s My Driving” placard provisions were preempted by a Federal law (the Federal Aviation Administration Authorization Act, or the F4A if you want to sound cool). It is disappointing that these program elements will not be available to residents and other community members affected by the trucking industry.

(A third provision – that would have required trucking companies to hire drivers as employees rather than so-called “independent contractors” – was already struck down in a lower court.)

But the real news is that despite the industry’s crowing, they failed to get what they really wanted: a return to unaccountability.  The Supreme Court declined to change the basic structure of the Clean Truck Program: the concession agreement itself. This is the heart of the environmental program, and it remains intact. The Port of L.A. may continue to require that cleaner, less polluting trucks serve the port, that the trucks be properly maintained, and the port remains able to bar trucks that do not comply.

Let me put it like this: It is disappointing to lose the two minor provisions, but there is no way the industry would have invested millions of dollars and taken litigation to the Supreme Court simply to preserve on-street parking and avoid a few “How’s My Driving?” placards.

The problem for the Clean Truck Program today is the same problem we’ve had since day one: the misclassification of truck drivers as “independent contractors.” As many as 90 percent of America’s port truck drivers are misclassified as “independent contractor drivers,” beholden to a single trucking company, paid by the load, but saddled with lease payments and operating costs for trucks they don’t own, and with high self-employment taxes. With no ability to control the fees drivers receive for the containers they haul, there is rarely money left at the end of the month to properly maintain the trucks. This results in trucks that are poorly maintained and are more likely to produce malignant fumes that affect the air quality in the ports and the neighboring communities.

In other words, we’ve done a great job at getting old trucks off the road and new trucks in service, but we haven’t yet solved the problem of sustainability. As one port driver recently said, “I cannot afford to maintain the new truck I drive. We just aren’t paid enough to buy diesel, insurance and tires, and to maintain our trucks to clean air standards. This rig is pretty new, but it’s already falling apart because I can’t afford to fix it. Something has got to change.” Most drivers take home around $30,000 a year; annual maintenance costs exceed $8,500 on these newer trucks.

But there’s more than one reason to address the employment status of drivers. Namely, that – despite what the companies call them – drivers are not truly independent contractors in the first place. Drivers understand that with this bogus label, companies are stealing from them. So drivers have been taking action on their own: filing hundreds of claims with the state Labor Commissioner, and filing lawsuits against the companies they work for, seeking to be recognized as the employees they truly are.  Hundreds of thousands of dollars in judgments have already been levied against companies that have inflated profits by pocketing payroll taxes, denying benefits, and pushing maintenance costs onto the drivers.

The Coalition will continue to work with drivers to address the problem of misclassification. And we will work with the port to ensure that, with the litigation in the rear-view mirror, robust enforcement will begin. With these two elements in place, we can shift the Clean Truck Program from the great start it is into the truly transformational program it needs to be.

Nuns on the Bus Tour to Reach San Francisco Today