“He’s getting his immunization shots today,” Hurtado grinned at the 3-year-old before pausing at a close-up of a woman’s forearm and what looked like a mosquito-bite-sized bump surrounded by a patch of ruddy inflammation. The next image revealed a gaping, half-dollar-sized crater where the bump had been.

Trumpcare: State public health leaders are bracing for the worst and hoping for the best.

“My wife got a tiny cut on her arm that became infected,” Hurtado explained. “It was [Methicillin-resistant] staphylococcus. She spent nine days in the hospital. They told me that if we hadn’t had Medi-Cal, the bill would have been more than $100,000. If this would have happened without medical coverage, there would have been no way for us to afford to pay that kind of expense.”

On the same day that congressional Republicans set the stage to repeal the Affordable Care Act, the 35-year-old father, who installs artificial lawns, grimly reflected on the shadow that his family and the majority of St. John’s patients have been living under since the election of Donald Trump signaled the coming end of the law that has dramatically transformed California’s health-care landscape.

“Before my wife got the infection,” Hurtado said, “our 2-month-old baby was also in the hospital, with an infection for [chicken pox], when he got an infection in his head and he was hospitalized for four days for the same [staph] bacteria. I imagine them not having medical coverage. Yes. Of course I’m worried.”

Though the form that Trumpcare will take remains vague, for Hurtado and his family — and the more than 50 percent of their newly insured South L.A. neighbors, who now rely on the state’s ACA Medi-Cal expansion for their health coverage — the future remains frighteningly uncertain. They are not alone. 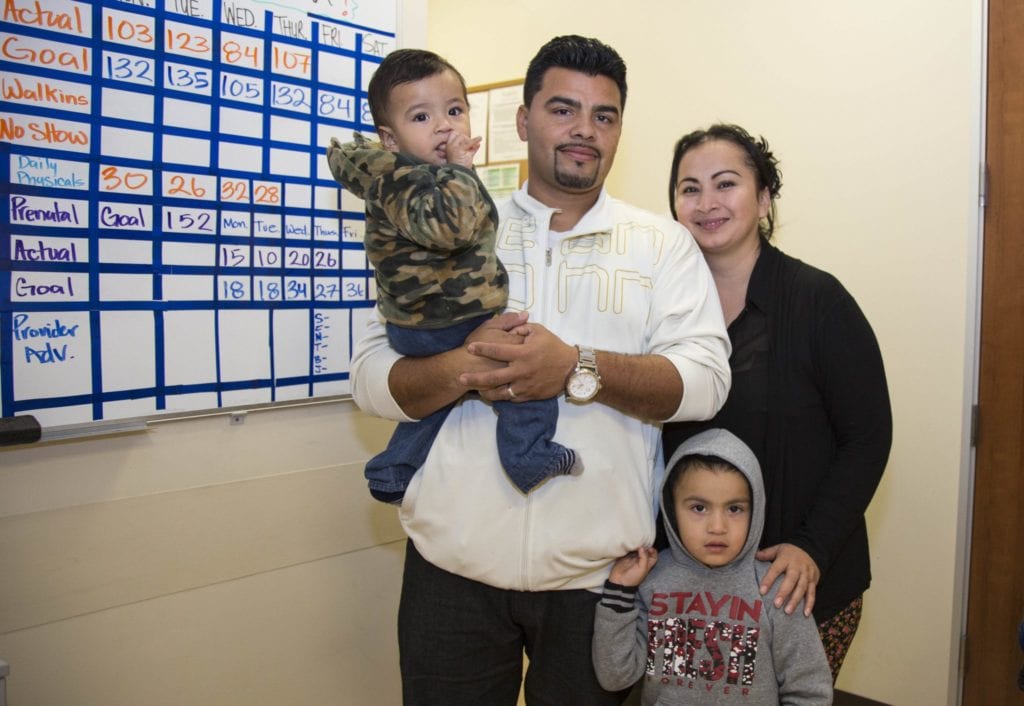 Fernando Hurtado and his wife, Amy Areli, with two of their four children at St. John’s Well Child and Family Center.

St. John’s alone has enrolled over 18,000 previously uninsured Angelinos, nearly all of them black or Latino, and more than doubled its insured-patient base. The health center has aggressively embraced the new ACA population to dramatically expand preventative and primary care throughout the region, which before the law had been ground zero of California’s uninsured crisis.

“We provide free medical, dental, mental health and support services, and case management in about 300,000 patient visits a year at 14 sites and two mobile [clinics],” St. John’s Well Child and Family CEO Jim Mangia told Capital & Main. “We provide health-care services to the homeless. We serve thousands of homeless folks through two mobiles that go into the riverbeds and to help buy homeless shelters. And we’re the largest health provider in South L.A., which is the largest area of contiguous poverty in the United States.”

But with Trump now in the White House, those gains are in the crosshairs of the new president and the Republican congress. At stake for Californians is $20.5 billion a year in federal ACA subsidies. The murkiness surrounding what will happen next has left the state’s political and public health leadership with little choice but to brace for the worst and hope for the best.

“It is almost impossible to develop a contingency without knowing exactly what we are dealing with,” state Senate Health Committee Chair Dr. Ed Hernandez (D-West Covina) told Capital & Main in an email. “A loss of federal funding would be devastating for low-income and middle-class Californians who rely on the ACA for their health insurance. We plan to do everything we can to protect the people of our state and ensure stability in the health insurance market and Medi-Cal program.”

St. John’s spotlights a lesser-known aspect of the Affordable Care Act — namely, its role as a conduit for $12 billion in construction infrastructure spending and operational funding for the expansion of private nonprofit health centers, which are known as Federally Qualified Health Centers (FQHC). These provide low-income and immigrant communities with quality health care, regardless of a patient’s ability to pay. That makes the center both an exemplar of how much California stands to lose, as well as an unexpected harbinger of what resistance to the abolition of the ACA might look like.

“I started that literally the day after the election,” Mangia said about planning for the Trump era, “and now I’ve got all of these players. There’s a lot of special interests that benefited from the Affordable Care Act. … We’re talking about, ‘Okay. What’s our advocacy need to look like? Who do we need to be talking to? Who do we need to bring to the table to craft a solution in the state?’” 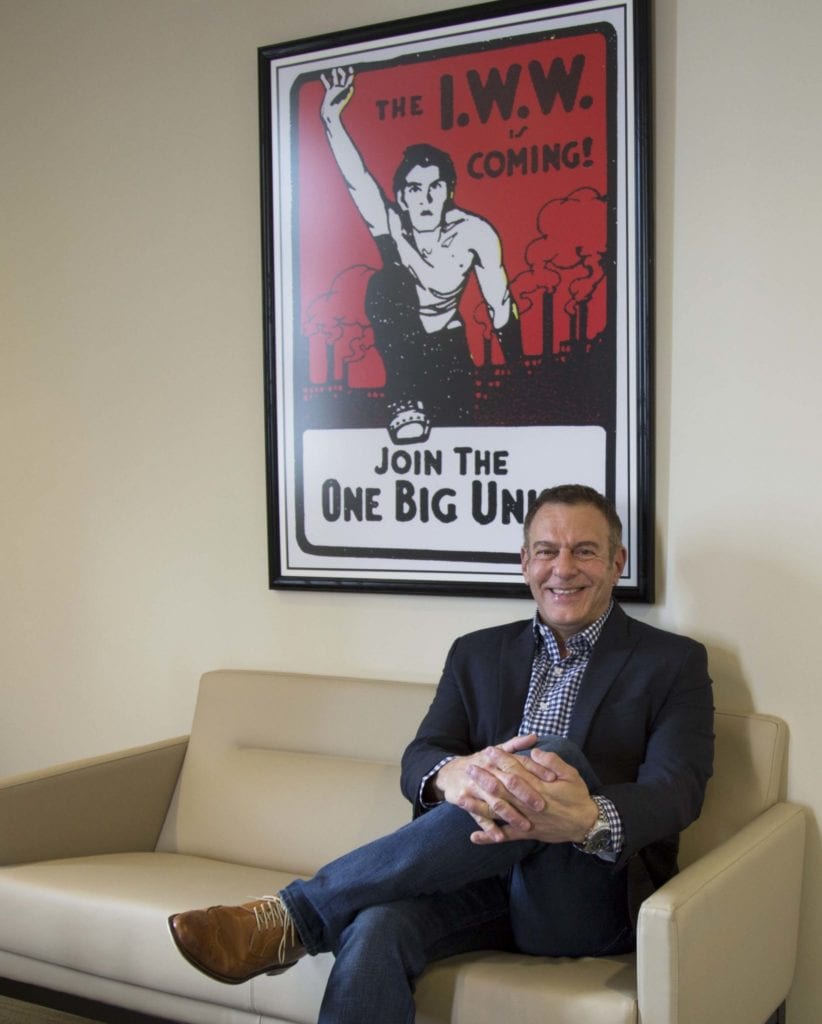 Forty-five percent of St. John’s patients are ineligible for insurance under ACA because of their immigration status. According to Mangia, who was part of President Obama’s health policy committee when the Affordable Care Act was first being drawn up, addressing the plight of those ineligible for Obamacare because of immigration status was always part of the plan. Care for the undocumented is partially paid by My Health LA, a no-cost health-care program run by L.A. County. Private fundraising makes up the rest.

The FQHCs have been instrumental in braking the country’s decades-long expansion of America’s health-care inequality gap, which continues to be one of Obamacare’s most significant achievements.

Even more transformative, perhaps, is the quality of the medical care and the innovations that ACA has delivered. The law reorganized payment methodology and radically re-prioritized the health-care system with pay-for-performance measures that shifted the focus of providers from end-of-life and sick care to prevention and primary care. It encouraged innovations like the patient-centered “medical home” — a holistic delivery model designed to improve quality of care through team-based coordination of care, for the “whole” patient. Tying Medicare payments to the quality, rather than the quantity, of care that characterized the pricey, pre-Obamacare fee-for-service model, created efficiencies and surpluses for health centers like St. John’s that could then be used to serve California’s estimated 3.3 million uninsured, along with its undocumented population.

“These relatively modest reforms actually ended up being revolutionary in all sorts of different ways,” recalled Anthony Wright, executive director of the advocacy coalition Health Access California. “There was all this really exciting work to provide people medical homes, and have early intervention to keep people healthy before they got sick in the first place. There was exciting work about how to treat issues around substance abuse and behavioral health medically, rather than criminally, which was starting to have profound benefits to not just our health system but to our criminal justice and corrections systems . If we undo the Medicaid expansion, we undo all that progress in one swoop.”

Preserving that expansion has been the focus of California resistors, including consumer groups, labor unions and Democratic lawmakers, since election day, both in the current campaign by patient advocates, to bring public pressure on Trump and Republicans, and in anticipating the full extent of the damage to California’s Medi-Cal expansion that will need to be controlled.

Nevertheless, it’s difficult to resist what is still unknown. And the extent of that damage won’t be clear until the plan is unveiled sometime after Trump’s nominee for secretary of Health and Human Services, Georgia Representative Tom Price, is approved by the Senate.

Recent promises by Trump for a speedy and concurrent repeal and replacement of ACA with “insurance for everybody” that is “much less expensive and much better” have only further muddled the picture. The broad strokes remain at odds with what has been outlined in separate ACA alternatives by Price, who opposed ACA’s fundamental reforms, and by House Speaker Paul Ryan. And Price’s Tea Party antipathy to federal entitlements makes future attempts to cut Medicare and Medicaid likely.

“Both of [the plans] would repeal most of the regulations under the ACA, but they would restore some aspects of the law, including subsidies for people to buy health insurance,” explained Gerald Kominski, Professor of Health Policy and Management, and director of the University of California, Los Angeles Center for Health Policy Research. “But their subsidies would be substantially lower than those currently available under the ACA, and would [go] back to a market that’s largely regulated at the state level rather than [have] the layer of federal regulations [that has standardized] the individual insurance market. So it’d be a little bit of a free-for-all.”

California resistors are divided as to whether the state would have the political will or financial wherewithal to make up the federal government’s $20 billion share of the Medi-Cal expansion and Covered California, should it be cut, or to even go it alone with a version of single-payer.

“I have always believed that health care is a right for everyone in California and the country,” state senator Ed Hernandez said. “The dilemma arises on how to finance it and whether the public supports it. … The state would be unable to backfill the loss of $20 billion in federal funds without massive tax increases or major program reductions.”

Wright illustrated California’s difficulty in translating a moral imperative into a health-care entitlement by pointing out that the recent passage of Proposition 56, the two-dollar cigarette tax that, beginning in April, will generate a billion dollars annually for Medi-Cal, had faced three ballot fights — and $200 million in opposition spending by tobacco companies — to become law.

“Before we get to what California does,” he cautioned, “we all need to be focused on the federal fight. The framework and financing that they provide is going to be very determinative about what is possible for California to do, whether it is an Obamacare lookalike or single-payer or anything else.”

Mangia expressed what might be the ultimate vision of California resistance. “I think it would make a very, very strong political statement across the country if the Republicans repeal [Obamacare] and California says, ‘Okay. Well, we’re going to keep it.’ Democrats control two thirds of the legislature. There’s a Democratic governor. I think we have a real opportunity.”

State of Resistance: Artists Push Back