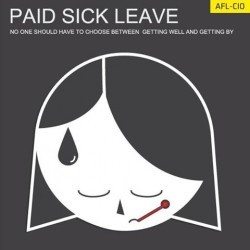 More than four in 10 private-sector workers and 80 percent of low-wage workers do not have paid sick days. This means people, especially women who are more likely to work in low-wage jobs, constantly have to choose between their health and a paycheck.

A post in Jezebel, brought to you by the AFL-CIO, explains why the lack of paid sick days causes a ripple effect on our health and communities:

“In fact, more than 80 percent of low-wage workers don’t receive a single paid sick day all year. This contributes to the creation of a sickness loop: Contagious kids go to school because mom can’t stay home with them; expensive emergency room trips are made that could’ve been prevented; employees show up to work and spread viruses to their customers and co-workers.

When young women can’t stay home to get their sleep and soup on, they venture out into the world where they touch handrails with contaminated hands and sneeze on things. This is the sick, sad world Daria warned us about.”

The National Partnership for Women & Families reports that adults without paid sick days are 1.5 times more likely to come to work sick with a contagious illness like the flu:

Read Women Shouldn’t Have to Choose Between Their Health and a Paycheck on Jezebel.

(Jackie Tortora is the blog editor and social media manager at the AFL-CIO. Her post appeared on Labor’s Edge and is republished with permission.)