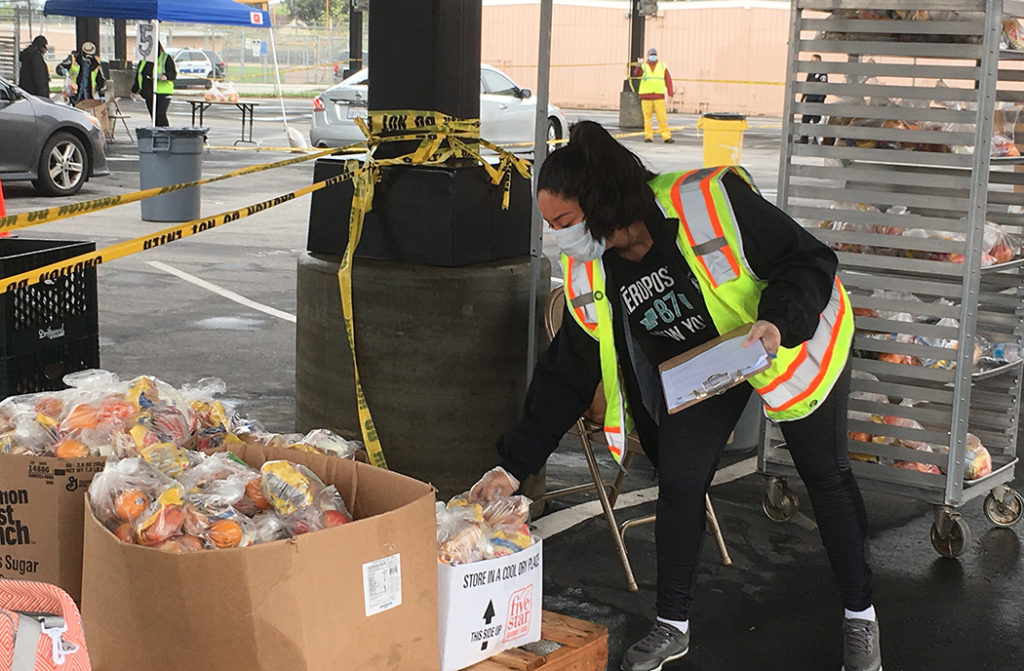 A worker at the "grab-and-go" food center at San Fernando High School in Pacoima. (Photo by Larry Buhl)

When schools across the nation closed last month to stop the spread of COVID-19, many of these same schools, along with community centers, stepped up to provide food to students, parents and community members. With uncertainty about how long stay-at-home orders will remain in place, how long the pandemic will be raging — and, just as important, when economic activity returns — it’s possible these food programs will be needed for months to come.

On a gray Wednesday morning a steady stream of cars and SUVs flows into the parking lot of San Fernando High School in Pacoima, as drivers stop by to pick up breakfast and lunch. It’s one of more than 60 grab-and-go sites operated by the Los Angeles Unified School District (LAUSD), which have served more than 7 million meals since opening on March 18, five days after the district closed classes.

Here at San Fernando High, school workers and volunteers hand out meals at seven drive-up stations, as well as a walk-up counter, every Monday through Friday morning. In the cafeteria, there are boxes of single-serve cereal, whole-wheat crackers and sunflower butter, sandwiches and fresh and dried fruit. Refrigerated meals are unboxed and wrapped by cafeteria staff and volunteers who all wear masks, gloves and aprons. After more than three weeks of providing boxed breakfasts and lunches – with social distancing and constant disinfecting — the kitchen’s a well-oiled machine, and nobody is idle.

“On the second day we had cars around the block waiting to come in and receive meals,” Mario Gallegos, LAUSD complex project manager for the northeast San Fernando Valley, tells me. “Then we added stations, improved efficiency and traffic on the road. There’s an average wait of five minutes to get in and get out, and that’s why they keep coming back.”

According to LAUSD spokesperson Barbara Jones, approximately 80 percent of students qualify for free or reduced lunches.

“There is a high demand (for food) in this area,” Gallegos adds. “A lot of students are poverty level or homeless districtwide.” Gallegos said most of their customers come every day and many give workers a thank-you or a blessing. Today, the walk-up window is also giving out packages of diapers.

Andres Chait, local district superintendent for the northeast San Fernando Valley, notes that the area he serves has an even greater share of people in need. And that’s why school IDs aren’t required to get a meal: “Anyone who comes can get meals. Kids get breakfast and lunch as they would in school, adults get one meal. It’s on the honor system, and they don’t ask for [LAUSD ID].”

Los Angeles Unified receives federal funding for its food programs, but not enough to cover the cost of providing meals to families and community members. The district will need additional federal and state money as it continues to operate the centers, which serve more meals than any food bank in the country.

The U.S. Department of Agriculture (USDA) reimburses the school under the Summer Feeding Schools Program at just over $2 per breakfast and $4 per lunch. The district plans to keep grab-and-go sites going throughout the districtwide shutdown. On Monday LAUSD superintendent Austin Beutner said all schools would be closed for the rest of the semester and through the summer, but an LAUSD spokesperson said no determination has been made about how long the grab-and-go program would be extended.

Like LAUSD, many other districts are also opening up their free meal programs to anyone in the community.

Last month Beutner also announced the creation of the “LA Students Most in Need” fundraising effort to cover meals, supplies and technology access for vulnerable youth in the district.

School districts elsewhere in Southern California, even in wealthier areas, are also distributing free meals to their communities. The Pasadena Unified School District has been providing 3,000 meals per day — breakfast and lunch — at its own grab-and-go food centers since March 17, according to PUSD spokesperson Hilda Ramirez Horvath. “To fill the gap on weekends, since March 28, the City of Pasadena started distributing lunch at the same seven school sites for students and families,” Horvath said. The Long Beach Unified School District is also offering breakfast and lunch for anyone under 18 at most of its schools. San Francisco Unified offers five days’ worth of meals, two days a week. An SFUSD spokesperson told Capital & Main the number of meals distributed has doubled each week, and that more than 250,000 meals have been distributed since March 17.

The COVID-19 Child Nutrition Response Act, passed into law last month, established a waiver to help school districts nationwide provide meals while limiting exposure to the novel coronavirus. And like LAUSD, the nation’s second-largest school district, with 700,000 students, many other districts are also opening up their free meal programs to anyone in the community throughout the COVID-19 crisis. New York City public schools opened 400 grab-and-go sites and earlier this month expanded to offer free meals to all New Yorkers who need them. Some districts, however, are facing challenges in managing safety while distributing meals.

In order to meet the special need, LAUSD and other districts are teaming up with nonprofits to assemble the meals. In Los Angeles, out of 7 million meals, more than 335,000 have been made by school and community meal provider Revolution Foods and distributed by nonprofit World Central Kitchen, with menu items like chicken enchiladas, lasagna, penne alfredo and spaghetti and meatballs.

Depending on how long the U.S. economy remains on pause, grab-and-go programs might need to become a long-term daily ritual.

Even before the economy hit pause, the USDA determined that 11.2 million children were classified as “food insecure.” In less than a month since states began issuing stay-in-place orders, more than 15 million Americans have filed for unemployment, according to the Department of Labor. Food banks have been strained, with increased need but fewer volunteers and less food. Last week more than 6,000 people showed up at a San Antonio food bank, a scene that could be replicated across the nation as COVID-19 closures continue.

Depending on how long the U.S. economy remains on pause, these programs might need to be a long-term daily ritual, and not just while schools are shuttered.