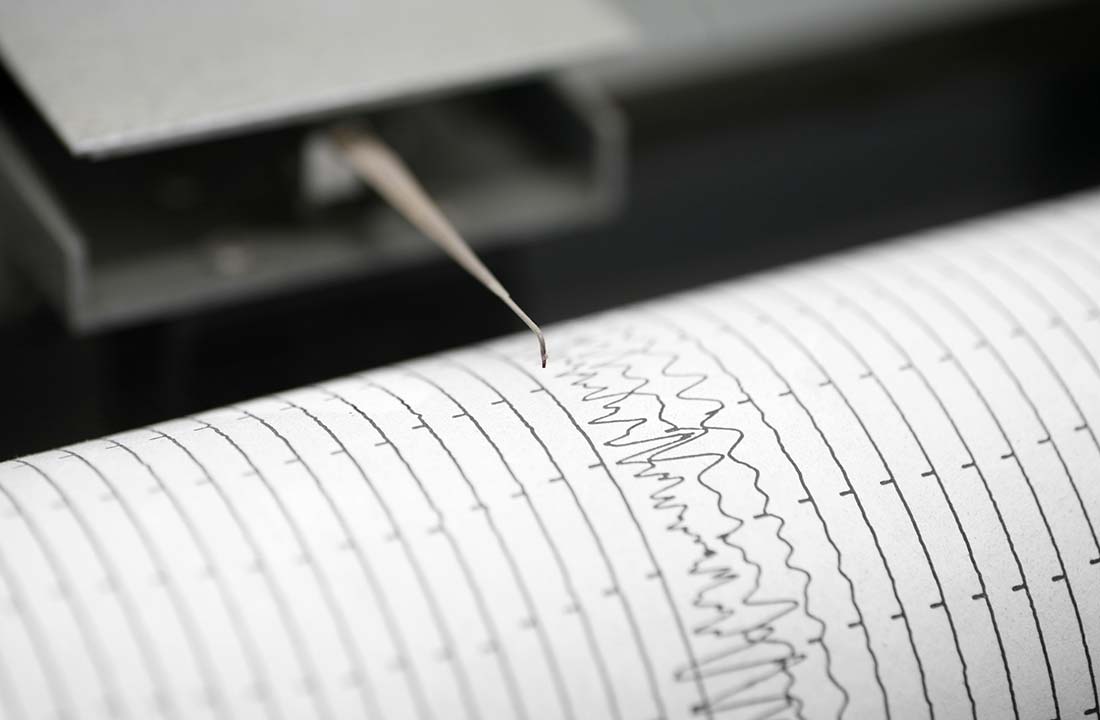 New Mexico’s oil and gas regulators and scientists are on alert after a dramatic increase in earthquake activity in southern New Mexico — an increase likely triggered by oil and gas industry injection wells in the Permian Basin.

There were 146 quakes through June so far this year. Those numbers are just in New Mexico — they are even higher over the border in the Texas portion of the basin.

The overwhelming majority of the quakes are small and barely perceptible to people right in the area where they occur. But Dr. Mairi Litherland, the manager of the Seismological Observatory at New Mexico Tech, is paying close attention because, “we have seen that when you start to see more of these smaller events, it can lead to larger events.”

Texas had several larger events in the past year that were felt in New Mexico. And in July, a 4.0 temblor in New Mexico shook the southeast corner of the state, “which is something that we pay attention to, for sure,” says Litherland. “It indicates that there is a risk in that area that we need to understand.”

Earthquakes can damage property if large enough. And there is some very important property in the area. The nation’s main nuclear weapons waste storage site, the Waste Isolation Pilot Plant (WIPP), lies a half mile underground in a salt formation in the middle of the New Mexican portion of the basin, a little north of most of the quake activity.

“There hasn’t been much seismicity in close proximity to the WIPP facility,” Litherland says, “but it is a concern, and it’s something that we need to keep an eye on.”

WIPP is the 10,000-year repository for highly toxic radioactive waste created by the nuclear weapons industry — things like tools, clothing and soil contaminated with plutonium. It is operated by private contractors for the U.S. Department of Energy (DOE).

Several nuclear sites in the Permian Basin are surrounded by brine injection wells, the likely cause of the increased seismic activity.

In 2014, a radioactive leak attributed to bad kitty litter contaminated several workers and shut the facility for nearly three years. And in 2016, ceiling collapses led to the closure of part of the underground facility. In response to emailed questions, a DOE spokesperson wrote that this was a “naturally occurring rock fall” in an unused portion of the facility.

“DOE requires that facilities are designed to withstand applicable hazards from natural phenomena, including earthquakes,” they continued. “To date, there have not been any increases in seismic activity at the WIPP site that warrants action or concerns.”

That’s not the only nuclear facility in the area.

Another private company, URENCO, operates the country’s only commercial nuclear fuel enrichment plant 40 miles due east of WIPP, near Eunice, New Mexico, on the Texas state line. And just over the border from that, the U.S. Nuclear Regulatory Commission just approved a high-level waste facility next to a decade-old low-level waste facility, something Texas Gov. Greg Abbott doesn’t like.

And more of the nation’s commercial nuclear waste could be headed to this region as well. Holtec International, with support from the Nuclear Regulatory Commission, wants to build a nuclear waste storage facility for up to 100,000 tons of spent nuclear fuel rods 12 miles north of WIPP, a plan opposed by New Mexico Gov. Michelle Lujan Grisham and others in state government.

All of these nuclear sites are surrounded by brine injection wells, the likely cause of the increased seismicity in the basin.

Oil and gas deposits aren’t pure pockets of hydrocarbons underground. They come mixed together with massive amounts of extremely briney water, or “produced water,” as the industry calls it.

Increasing oil and gas production over the last dozen years in the Permian Basin has created a parallel increase in the amount of brine. Oil and gas wells pull up as much as 10 times more brine than oil or gas, though the ratio is generally closer to 4:1 says Adrienne Sandoval, director of the New Mexico Oil Conservation Division.

And, she points out, “You have to do something with it.” Most often, operators inject it, along with the water and chemical cocktail used to frack new wells, into deep rock formations through different wells at separate locations, usually below oil and gas layers.

Between 2011 and the end of 2020, the amount of briney wastewater injected underground in southeast New Mexico rose nearly 40%.

There is a lot of water to deal with.

That’s more water than is currently in Elephant Butte Reservoir, the state’s largest reservoir, on the Rio Grande. Granted, the reservoir is only filled to 5.6% of capacity, but that’s because of increasing aridification across New Mexico, fueled by climate change.

Forcing that produced water into lower layers can induce quakes when the high-pressure brine pushes on underground faults, causing them to slip and slide past each other to release increasing pressure. And that slipping and sliding translates into earthquakes.

“That’s definitely the most likely cause,” Litherland says of the recent seismicity. She says that a lot of forces are at play in creating an induced earthquake — the amount of brine, the rate it’s injected, the depth of injection and the rock formation where it all takes place.

But, “when there starts to be a lot of fluid injection … and the seismicity increases year over year, it’s pretty undeniable that that seismicity is induced.”

Dr. Alexandros Savvaidis, manager of the Texas Seismological Network, says that these conditions make the quakes difficult to study and very difficult to predict. Plus, there is often a time lag between injection and when a slip happens.

Seismicity doesn’t always happen at the wastewater injection site. Earthquakes can be triggered up to 24 miles away from the triggering injection wells.

“You don’t inject today, and you have an earthquake tomorrow,” he says. Seismicity generally happens at the time of injection, or a few days to a few weeks later.

Also, the seismicity doesn’t always happen at the injection site — it can happen miles away. “It can be 20 to 25 kilometers [12 to 15 miles] and longer than that,” he says. He thinks that quakes can be triggered up to 24 miles away from the triggering injection wells.

The DOE spokesperson wrote that there are no injection wells within 16 square miles of the facility — a radius of about 2.25 miles.

But according to records from the New Mexico Oil Conservation Division, there are five injection wells within a 12-mile radius of WIPP — the distance Savvaidis says that quakes can travel — 74 within a similar radius of the proposed Holtec site and 448 within 12 miles of URENCO and the proposed storage facility in Texas.

Those are just the injection wells on the New Mexico side. There are more in Texas.

New Mexico doesn’t have specific seismic safety guidelines for oil and gas wells. And some aren’t as concerned about the increasing quakes.

“We don’t study induced seismicity at the research center,” says Dr. Robert Balch, the director of the Petroleum Recovery Research Center at New Mexico Tech. The center studies techniques to increase oil and natural gas production in the state and transfer that technology to industry.

“Mainly because it’s not a very big issue like it is in Oklahoma,” he says. That state is the nation’s poster child for induced seismicity from injection wells.

“For a long time, the existence of induced seismicity was controversial. Induced earthquakes look pretty much the same as naturally occuring earthquakes.”

In November 2011, a 5.6-magnitude quake hit Prague, 45 miles due east of Oklahoma City, severely damaging several houses, toppling chimneys and collapsing the turret on a building at a local college. For years the state government there fought the idea that the quakes were tied to the oil and gas industry. But in 2014 a report for the USGS National Earthquake Hazards Reduction Program that was published in Science linked injection wells to that quake and others in Oklahoma. That quake swarm peaked in 2015.

“For a long time, the existence of induced seismicity was controversial,” Litherland says, because, “induced earthquakes look pretty much the same as naturally occuring earthquakes.” But she says that when injection decreased in Oklahoma, the size and number of earthquakes decreased as well.

Meanwhile, in the Permian Basin, oil production and wastewater injection is increasing, and is set to increase further.

Balch says that the geology underlying the Permian Basin is dramatically different from what’s found in Oklahoma, and he believes it poses a lower risk for large quakes. Also, he says that in Oklahoma, water was injected much closer to the underlying bedrock than in New Mexico, and that can create a higher risk of larger quakes.

“I guess I’m not very concerned about earthquakes in the Permian,” he says, “but tomorrow if there’s a 9.6 (magnitude quake) I’d have to change my mind, wouldn’t I?”

He also only heard of one instance of an earthquake damaging an oil and gas wellbore.

It appears that the only seismic guidelines for oilfield equipment or wells offered by the American Petroleum Institute are for offshore drilling rigs and onshore storage tanks.

“Somebody told me that somebody told them that a well was blocked” after a quake in the 1990s near Eunice, he says. “There’s no real evidence of that in the literature. And I imagine companies would keep that kind of thing to themselves. Someone might blame them for the earthquake, right?”

It appears that the only seismic guidelines for oilfield equipment or wells offered by the American Petroleum Institute, the industry guideline leader, are for offshore drilling rigs and for onshore storage tanks.

New Mexico also does not have seismic guidelines for operations.

New Mexico Oil Conservation Division Director Sandoval says that her office hasn’t seen any seismically induced well issues, but she also thinks that there haven’t yet been quakes large enough to damage wells.

OCD inspects injection wells “just as much as other oil and gas wells, if not more,” she says. And rules implemented three years ago increased spacing between injection wells to one and a half miles, “so that they’re not spaced right next to each other like some other states have done.”

She says that her office does have the authority to shut down wells in an emergency, but “we have not had to use emergency order authority, at least that I’m aware of.”

She also says that operators are reusing more produced water in their operations, cutting down on the amount being disposed of by reinjection. “And the more that that can occur, you know, I think the better overall.”

Over the last several years, Litherland’s group has installed more — and more sensitive — seismometers across New Mexico to give them more accurate location information on the small quakes that were recently recorded.

“Because of the WIPP facility we want to be, you know, particularly cautious,” she says. “And it’s not always easy to figure out what the best thing to do is.”

But she does know one thing for sure: “If we continue injecting more and more fluid into these same locations that are experiencing earthquakes now, we would most likely expect to continue to see earthquakes,” she says.