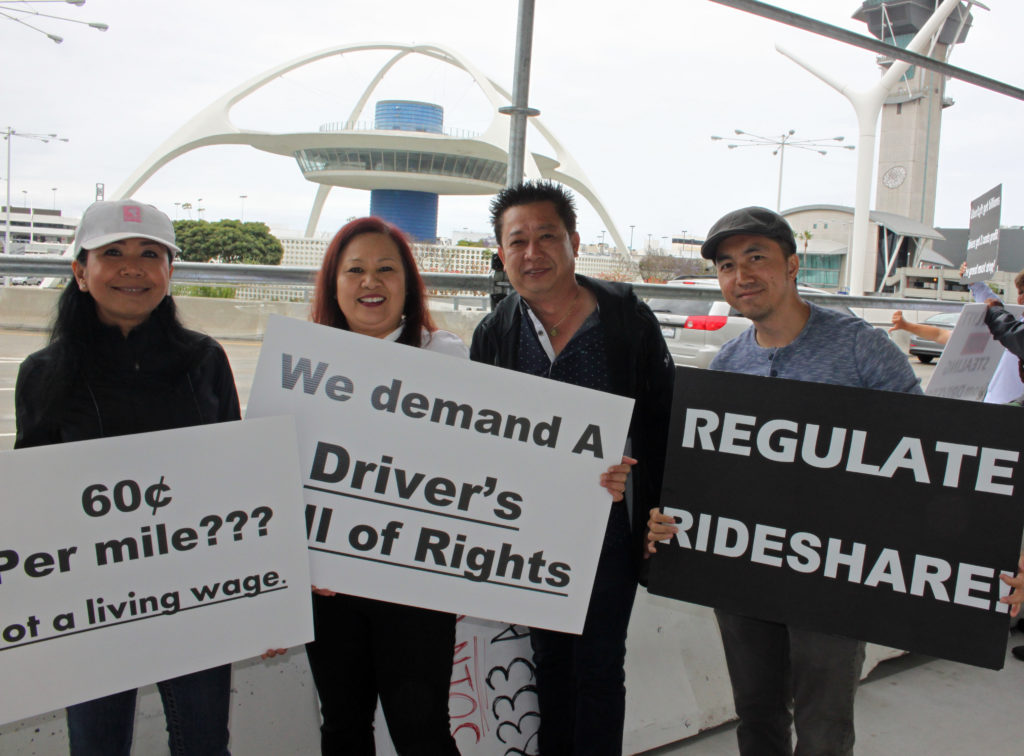 All photos by Joe Rihn

As part of Wednesday’s worldwide day of action, Los Angeles-area Uber and Lyft drivers participated in a strike by turning off their apps for 24 hours. Several dozen striking drivers gathered at L.A. International Airport and walked a picket line to protest low wages in the rideshare industry. Occupying a portion of the airport’s departures platform, picketers shouted and displayed signs, encouraging passing rideshare drivers to join the strike.

James Hicks, an Uber driver and spokesperson for Rideshare Drivers United, which organized the Los Angeles action, said a steady decline in the per-mile rate that companies offer drivers was a major factor behind the strike. “[Uber] recently had a 25 percent pay cut, so it went from 80 cents to 60 cents,” Hicks said. “Lyft is still at 80 cents per mile, but neither of those fares are adequate for drivers to make a living – like we used to, back when the platforms first launched.” A statement on the strike from Rideshare Drivers United says that drivers are fighting for a minimum hourly rate of $28, which adds up to about $17 after expenses. A recent study from the Economic Policy Institute found that Uber drivers earn the equivalent of about $9.21 per hour when accounting for Uber’s “commissions and fees and vehicle expenses,” as well as “the cost of a modest package of health insurance and other benefits equivalent to those earned by W-2 workers.”

The strike came amidst highly anticipated initial public offerings from the two rideshare giants. Lyft’s IPO took place in March, while Uber’s is expected today, May 10. “We chose a date that was as close to the IPO as possible,” Hicks said, explaining how news of the IPOs highlights a vast wealth gap between drivers and rideshare companies’ upper management. “You have drivers who are on public assistance. You have drivers who are homeless.” Although rideshare apps and other “gig economy” jobs are often billed as ways for workers to make extra cash in their spare time, that hasn’t been the case for many. “That’s my only income,” said Morlana Kim, who drives for both Uber and Lyft. “The maintenance is very expensive and the gas price is so expensive. Sixty cents per mile is not enough.”

Driver/Activist: “We helped them make millions of dollars. Why now are they using that money to replace us?”

In a statement, Lyft said: “Lyft drivers’ hourly earnings have increased seven percent over the last two years, and they have earned more than $14B since we launched. Over 75 percent drive less than 10 hours a week to supplement existing jobs. On average, Lyft drivers earn over $20 per hour. We know that access to flexible, extra income makes a big difference for millions of people, and we’re constantly working to improve how we can best serve our driver community.”

Richard Poeung, a driver on the picket line who has been with Uber for two and a half years, also said that driving for the app is his main job. “I want them to give us a fair price,” he said. “We have to work 60 to 70 hours to make a living.” Poeung also pointed out the large disparities between the amount riders are charged and what drivers take away. “[Uber] takes a lot. Sometimes they take like 45 percent,” he claimed. (Uber did not respond to requests for comment in time for publication.) 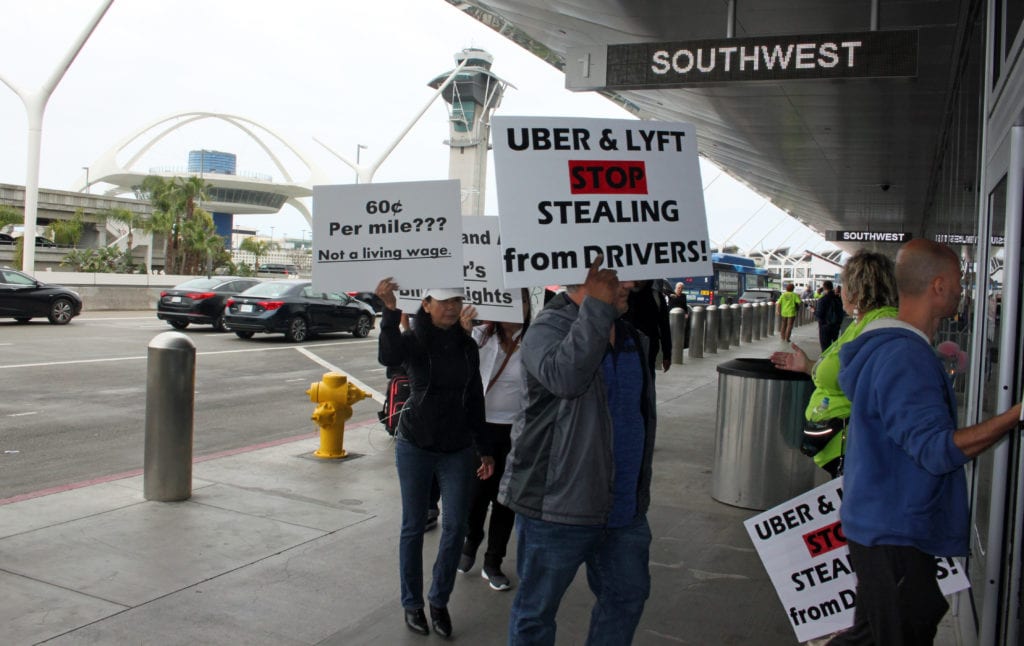 Following the morning picket line, protesters marched through LAX’s departures terminal before rallying at a nearby park, where rideshare drivers spoke publicly alongside labor advocates, including a spokesperson from the International Longshore and Warehouse Union and a representative from the office of California Senator Maria Elena Durazo.

Speakers addressed the high percentages that companies extract from fares, as well as Uber and Lyft’s inflated CEO salaries. “My CEO, Dara [Khosrowshahi], made $45 million last year,” said Hicks, prompting chants of “Shame!” Later, driver and volunteer organizer Esterphanie St. Juste told the crowd about a time she received only $46.30 of an $81.25 fare. “We are accusing Lyft and Uber of stealing from us – plain out theft,” she said. Drivers’ concerns were not limited to fair pay. Alvaro Bolainez, a driver who also runs a popular Facebook group for Uber and Lyft drivers, touched on larger issues in the industry, including automation and Uber’s investments in self-driving cars. “We helped them become who they are. We helped them make millions of dollars. Why now are they using that money to replace us?” he asked.

Hicks, too, feels that the strike is about more than improving current conditions for Uber and Lyft drivers. “This is a job that people are going to find themselves in. We need to fight for them,” he said. “We’re fighting for the future of the rideshare industry.”