As California regulators decide whether to reopen the Aliso Canyon natural gas storage facility, the site of the largest human-caused release of greenhouse gasses in U.S. history, residents and activists – often one and the same – vow to redouble their fight against its reopening.

SoCalGas says the infrastructure enhancements it completed should allow the 3,600-acre gas field beneath the hills north of Porter Ranch, idled since the October 2015 blowout, to go back online as soon as possible.

Former Chatsworth resident Andrew Krowne, a staff accountant by profession who says he’s added “unpaid environmental activist” to his resume, told Capital & Main that the company’s history of negligence has rendered it untrustworthy.

“This entire experience has shown [SoCalGas’] complete disregard for people and sheer incompetence in handling every aspect of this disaster,” he said.

Krowne said his family, which relocated for six months on its own dime, is still having health problems, though not as severe as during the initial gas leak.

Health Problems, But No Health Study

In the wake of the 2015 blowout, there were numerous complaints of health issues both mild and serious, from residents living miles from the disabled Aliso Canyon facility.

What’s fueling residents’ efforts to shut down Aliso for good is fear that they are still at risk of long-term health problems. And some say mysterious respiratory illnesses they experienced before the blowout suggest the facility had been leaking something toxic long before October 2015.

Last February, a local physician, Dr. Jeffrey Nordella, spoke out against reopening the facility, referring to it as “an act of negligence.” Nordella pointed to testimony of residents who said they have severe headaches, dizziness, nosebleeds, rashes, respiratory irritations and a variety of other ailments.

Granada Hills resident Jane Fowler relocated for seven months after the blowout, telling Capital & Main that she and her husband are still getting sick. “My husband developed extreme anemia, and the doctors couldn’t figure out why. I asked the doctor to find if anyone else was suffering from anemia, and he said many were.”

Lori Aivazian, who speaks about ongoing and serious health problems from the blowout, didn’t even know about the gas storage field when she and her husband bought a home in Porter Ranch in 2000.

“Even since the blowout there have been three fires and numerous leaks, and we’re afraid of what could come next,” she said, pointing to occasional failures at the facility, sometimes due to other companies operating at the field. “A gas storage field has no business being under a residential neighborhood.”

Last week residents’ claims of illness got celebrity backup as Cedric the Entertainer sued SoCalGas over illnesses he claimed his family continues to suffer from the gas leak.

But all of the recurring health problems – many documented by the L.A. County Board of Health — remain anecdotal until a comprehensive health study is completed.

In February, SoCalGas agreed to pay $8.5 million to settle a lawsuit with the Air Quality Management District (AQMD) over the blowout, an amount that includes $1 million to fund a three-part health study of the communities impacted by the leak. Many residents say that’s inadequate for conducting serious epidemiological studies of the blowout’s health effects.

Residents: No Analysis, No Reopening

Residents and their lawmaker allies say a true autopsy about the disaster, which spewed natural gas for four months and which displaced thousands of residents and two Los Angeles public schools, has barely begun.

Senate Bill 57, co-authored by state Senator Henry Stern  (D-Canoga Park), requires the California Public Utilities Commission and the Department of Oil, Gas and Geothermal Resources (DOGGR) to make lifting Aliso Canyon’s moratorium on natural gas injections conditional on completion of a “root cause analysis” (RCA) of the source of the 2015 blowout. In a February letter to Stern, U.S. Senator Dianne Feinstein (D-CA) announced her support for the bill.

SoCalGas has been opposed to the RCA, which would take at least six months to complete. In an email, company spokesperson Fiorella Canedo said SB 57 was “unnecessary because the results of the root cause analysis are independent from the safety of the facility.”

“Extensive testing and comprehensive safety enhancements at Aliso Canyon that meet or exceed established legal and regulatory requirements to begin full operations have been verified as complete by DOGGR and California Public Utilities Commission (CPUC),” she continued. 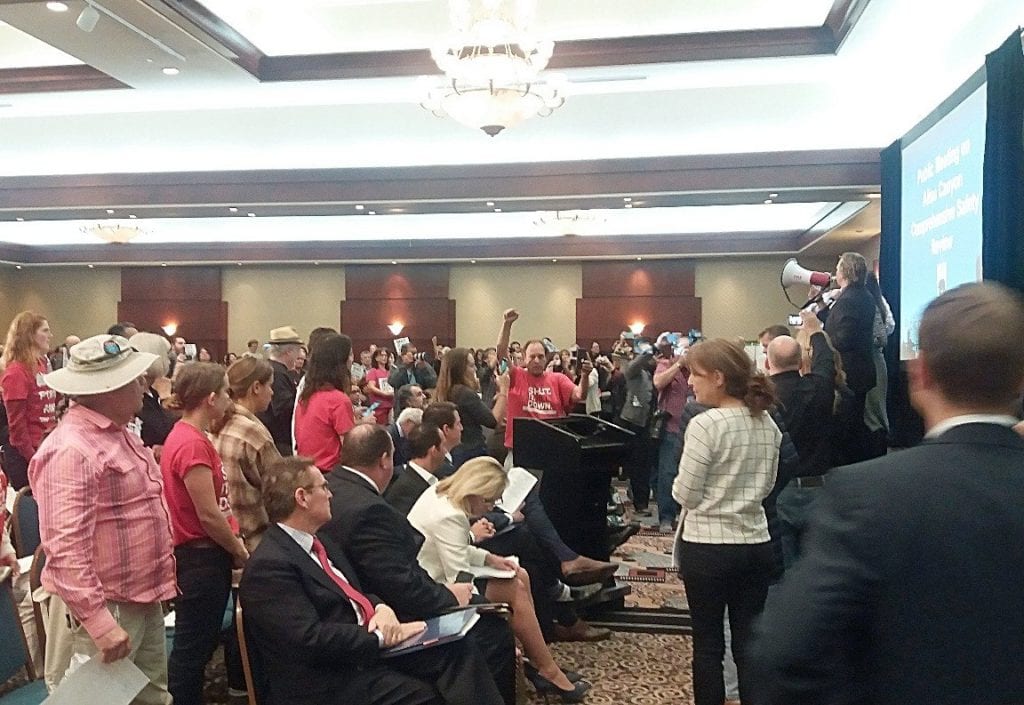 Many residents aren’t buying it. A February meeting attended by hundreds at the Woodland Hills Hilton was disrupted as Matt Pakucko, the head of the community group Save Porter Ranch, said his organization was disrupting the state officials’ “dog-and-pony show.” DOGGR officials had planned to present their safety review findings at the meeting.

“If you cannot state with a root cause analysis what caused the blowout then you cannot state that the facility is safe,” Pakucko said through a bullhorn as stony-faced state officials looked on.

In late May SB 57 was tabled when four Democratic senators abstained from voting on it, despite intense lobbying from Save Porter Ranch members who traveled to Sacramento and met with lawmakers several times. (The Senate can still vote on the measure again this summer.)

Even if SB 57 passes and a root cause analysis is completed, SoCalGas still faces a legal challenge to reopening the storage facility.

Earlier this year the Los Angeles County Board of Supervisors filed suit to keep Aliso Canyon closed until the completion of the RCA, as well as a comprehensive environmental review that would explore alternatives to the facility. The lawsuit also demands a comprehensive emergency response report for future blowouts at Aliso, as well as a seismic report. The Santa Susana fault line runs directly under Aliso Canyon.

SoCalGas has consistently maintained that the Aliso Canyon storage field is critical to providing energy to more than five million residential customers and dozens of power plants in the L.A. basin. And the company has continually predicted that without Aliso Canyon operating at full capacity, the region would be in danger of rolling blackouts. Residents call that threat “blackout blackmail,” noting that no blackout has occurred since the facility has been idled.

In an email, company spokesperson Canedo claimed that California was lucky to have had a mild summer and winter last year, “and even with favorable weather, natural gas storage was needed on several occasions to help avoid energy shortages.”

Those occasions were January 24 and 25, when state oil and gas regulators allowed the utility to withdraw gas from Aliso during the moratorium to meet an increasing “hourly demand” during a cold snap.

San Diego engineer Bill Powers, who has testified as an expert before state regulators that SoCalGas is trying to manufacture a shortage in order to justify use of Aliso Canyon, has written that Aliso would not be needed if SoCalGas conducted daily balancing of supply and demand.

“SoCalGas allowed the supply-demand balance to drift substantially before and during each of three cold spells in the winter of 2016-2017, by as much as 30 percent,” Powers wrote, criticizing the Aliso Canyon Summer 2017 Risk Assessment, which was prepared by the CPUC to determine how to prevent blackouts.

“If they see a cold snap or heat wave coming, they can easily tell generators in other locations to bring gas to the L.A. basin,” Powers told Capital & Main. But instead they let the balance get out of whack, let the system drift and have an excuse to draw gas out of Aliso Canyon.”

Powers added that SoCalGas is eager to reopen Aliso so it won’t lose its capital investments in infrastructure upgrades, as well as the money it gets from being a natural gas “broker.”

“Aliso Canyon is a cash cow. SoCalGas lets big customers park gas there, and rate payers are paying for them to do that.” Powers added that he estimated rate payers could save $70 million a year if Aliso closes, through suspension of work on upgrading existing wells, ending new drilling at the facility, and on not having to pay for the company’s new Turbine Upgrade Project that’s nearing completion.

Regulators from DOGGR could give the green (or red) light on reopening Aliso Canyon at any time. Governor Jerry Brown has the ability to overrule their decision, but he hasn’t said which way he’s leaning. Several activists and residents told Capital & Main they’re concerned that Brown’s familial ties with Sempra could cloud his judgment.

That’s why those intent on seeing Aliso Canyon shuttered permanently are not waiting for regulators and the governor to decide its fate. They’ve spent 20 months calling, emailing, facebooking, lobbying, analyzing engineering reports and rallying outside lawmakers’ offices. They even installed their own neighborhood methane monitoring system, out of distrust of SoCalGas’ Fence Line System.

“We saw that by letting others do the job, we get screwed,” Andrew Krowne said. “The governing board of AQMD settled for a pittance to do a so-called health study. So we’re working every avenue possible to get rid of this facility.”

Will California Overhaul Its Cap-and-Trade Program?